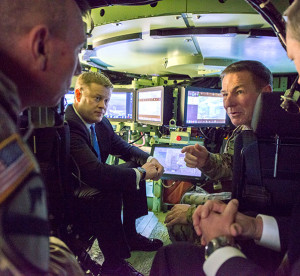 Under Secretary of the Army Ryan D. McCarthy, center left, and Gen. James C. McConville, the Army’s vice chief of staff, center right, discuss emerging technology that could be part of the Next-Generation Combat Vehicle while inside the Mission Enabling Technologies-Demonstrator, a modified Bradley Fighting Vehicle equipped with several upgrades. Both leaders toured the Army’s Tank Automotive Research, Development and Engineering Center at the Detroit Arsenal in Michigan to gauge progress in developing the future combat vehicle Jan. 18, 2018.

Two of the Army’s top leaders reviewed last week a new process to accelerate the Next-Generation Combat Vehicle program amid a massive shift to modernize the entire Army.

Eight cross-functional teams, which cover six modernization priorities including future combat vehicles, were created in October to expedite the delivery of effective capabilities to Soldiers. The current plan is for the teams to fall under the U.S. Army Futures Command when it officially stands up this summer.

Dr. Mark T. Esper has made modernization one of his top priorities for his tenure as Army secretary, and has given Under Secretary of the Army Ryan D. McCarthy and Gen. James C. McConville, the vice chief of staff, the authority to continue to oversee progress of the newly-formed teams.

The teams are designed to bring end users together with experts from science and technology, acquisition, requirements, test and evaluation, resourcing, and other specialties across the Army to reduce the timeline to procure and field new equipment.

“Our job is to set the conditions and put them in the position to do what they do best,” McCarthy said Thursday after he toured the Army’s Tank Automotive Research, Development and Engineering Center, or TARDEC.

Over the coming weeks, McCarthy said there will be extensive discussions to guide development of an updated policy on restructuring for the new modernization-focused command. That policy is expected to be announced in March.

“We don’t want to wait for the Futures Command to stand up,” McConville said. “We want to get going now. The clock is ticking and we want to make sure that we’re moving on these critical capabilities.” 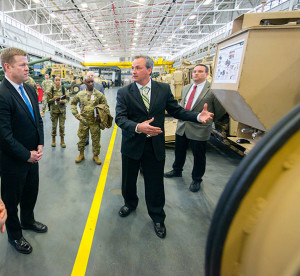 Only about two months in operation, Brig. Gen. David Lesperance said his team’s partners have made great headway in understanding the innovative organizational construct.

“Our big task right now is defining how we are going to fight in the future,” said Lesperance, the commandant of the Armor School at the Maneuver Center of Excellence at Fort Benning, Ga.

This could involve autonomous systems, for instance, to create manned-unmanned teaming with ground vehicles, among other technology, he said.

His team, which has a core group of 20 personnel, held a week-long workshop last week at TARDEC headquarters to further discuss how to align and assess technologies that could be game changers on the battlefield.

“The next step beyond this is then developing the experimentation and analysis pathway,” he said, “so that once we build experimental prototypes, they’ll just go out into the field where they can be put into Soldiers’ hands.”

The team’s end users will come from III Corps through a partnership with U.S. Forces Command, he added.

Next-gen combat vehicle
Faced with an aging fleet of combat vehicles and near-peer threats, it is evident the Army must modernize in this realm in order to achieve overmatch on future battlefields.

To get after the Next-Gen Combat Vehicle, the Army awarded a $237 million contract in October to produce two prototypes by 2022. There are ongoing efforts to further accelerate the delivery of prototypes for testing in the 2019-20 timeframe. The goal is to field the NGCV by 2035.

“Right now in the Army we’re at an inflection point. For the past 16 years we’ve been fighting a counterinsurgency/counterterrorism type of fight,” McConville said. “We’re really shifting right now to be ready for the future fight, which we think is going to be a multi-domain fight where we’ll be contested in all five domains — land, sea, air, cyber and space.”

Determining which capabilities will go into the NGCV, so Soldiers can have an advantage in the land domain, is the main role of the new cross-functional team.

Some of those capabilities may already be on the Mission Enabling Technologies-Demonstrator, a modified Bradley Fighting Vehicle that was on display at TARDEC.

Equipped with an unmanned/remote turret, the demonstrator also has an upgraded radar for greater target detection, autonomous driving features, and a monitor on the inside of the rear hatch for real-time situational awareness.

A brand new hull intended for the NGCV was also on display. While the exact hull specifications have not been revealed, it has been touted as a success story for the Army’s work with industry. 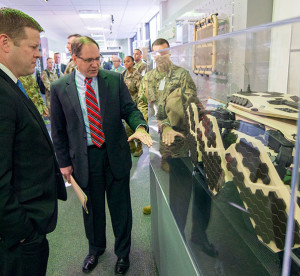 Paul Rogers, director of the Army’s Tank Automotive Research, Development and Engineering Center, shows Under Secretary of the Army Ryan D. McCarthy, left, a combat vehicle design from a Soldiers Innovation Workshop, which allows regular Soldiers to develop ground vehicle concepts, during a tour of the center at the Detroit Arsenal in Michigan Jan. 18, 2018.

Engineers at TARDEC designed the hull and used government-owned tools to do all the underbody blast modeling, structural modeling and optimization of the design to get it to a high performance level.

“The government designed it, then industry manufactured it,” said Paul Rogers, director of TARDEC. “And it was that partnership that achieves the phenomenal results we’ve seen with it.”

Rogers, who represents the cross-functional team’s science and technology support, said his center in recent years has also worked to advance an array of combat vehicle architecture — from autonomy, power generation, vehicle electronics, protection, lethality to physical appearance — that could feed into the NGCV program.

“We’re trying to establish flexible architecture that the Army can control and influence what innovation comes into that architecture over time,” he said.

Historically, he said, the Army would give competitive contracts to companies to come up with their own solutions to the Army problem. Based on lessons learned in the past with other combat vehicle projects, his center has created a new business model where it is more involved in the development process.

“Instead of thinking of it as a contract where we’re hiring industry to do something, it is actually a partnership,” Rogers said. “We’re instituting something that gives the Army great flexibility, yet is wide open for the best and brightest minds from industry and government to collaborate on the end product.”