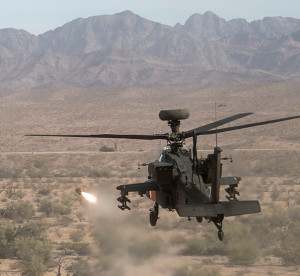 AVTD coordinated multiple efforts to assure a successful test as JAGM moves towards its next major milestone, a low-rate initial production decision.

“The close cooperation between YTC and the Operational Test Command during the short duration was critical,” said Lt. Col. Karsten Haake, Chief of the AVTD Rotary Wing Test Division.

“Without the professionalism and the mission dedication of the YTC range support team, test completion would have been significantly delayed. This was truly a team effort.”

“One of the things that sticks out to me is the simplicity for the crew in terms of how they select weapons for their missions,” said Chief Warrant Officer 5 John Bilton, the first non-experimental test pilot to fire the missile, a milestone that took place at YPG in the fall.

“Before, we had to put a lot of thought into, ‘What do I need?’ As soon as I launch, I don’t get to come back and change out my missiles,” Bilton said. “In combat, you don’t want to encounter a target you need to hit and not have on-board the right missile for the job.”

The JAGM boasts the ability to use semi-active laser or radio frequency as a means of guiding it to target.

Moreover, the crew can switch modes within seconds as a combat scenario evolves.

“If you’re getting shot at and your line of sight goes off the target, your missile misses. JAGM can start off using the laser, then transition to the radar portion and still hit the target if the crew has to use evasive maneuvers,” he added.

More capable in adverse weather conditions and boasting a longer range than the older Hellfire, the JAGM can now be fired and aircrews can retreat to a safer standoff distance, but also can be aimed without pointing the laser directly at the target.

“You aren’t required to have your laser sight on a target to hit it,” said Kennedy.

He also said the ability to off-set lasers, a capability that defeats potential laser countermeasures, has distinct tactical advantages.

“The ability to not have to put the laser directly on the target and let the adversary know that you are about to kill him is a tremendous benefit,” added Al Maes, Aviation weapons technical advisor for the Training and Doctrine Command’s Capability Manager Recon Attack.

“Once you have the missile off the rail and encounter smoke or dust or fog, a regular laser missile could lose that target. With JAGM, I have a pretty good guarantee that I am going to kill that target with a single missile instead of multiple missile shots,” he said.

YPG’s vast ranges and variety of realistic targets is a great location and allows the Apache equipped with JAGM to operate in a variety of situations and altitudes that resemble an operational environment.

“We’re out here shooting at real targets,” said Scott McLendon, AVTD Operational Test Officer for JAGM. “It’s a real T-72 driving down the road, not a burnt-out hulk with a million holes in it sitting out on the range. To me, the real targets provided at YPG are really a value-added.”

To make the testing as realistic as possible, YPG personnel installed remote-control kits on four separate target vehicles, allowing pilots to fly scenarios where they engaged multiple moving targets at once. 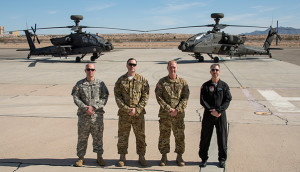 “In an active combat zone or engagement area, you have multiple targets, half of which could be burning,” said Chief Warrant Officer 5 Scott Jackson, AH-64D/E Recon and Attack Standardization, TRADOC Capability Manager Recon Attack. “The other half could be evading. Then you have wind shift and wind flow that could kick up obscurants and make it more difficult to determine a clean target set.”

“We also get more battlefield realism in that we get dust as well as smoke, so we get a two-for-one here in terms of the environmental piece,” added Maes.

Information gathered during the operational test not only validates the weapon, but also contributes new insights for training pilots on how to use the JAGM for maximum effect.

Though the operational test is now complete, further developmental testing, including integrating new software to support the JAGM into the Apache, will continue at YPG.

Yuma Proving Ground has nearly 2000 square miles of restricted airspace, a vast and precious asset used to test manned and unmanned aircraft –and their weapons — in all stages of the development cycle.

The clear, stable air and extremely dry climate — which makes inclement weather a rarity — as well as YPG’s isolation from urban encroachment, makes it highly coveted for this type of testing.

“YPG is way less restrictive than some other installations,” said McLendon. “We can put the missile through all the parameters we need to, including high-altitude shots. It’s really user-friendly here.”

YPG can conduct multiple tests concurrently and without having to compete for runway and airspace with manned fighter jets, a limitation at other installations.

The close coordination, professionalism and favorable test locations assured the success of this critical test as this new capability moves towards fielding for Soldiers.