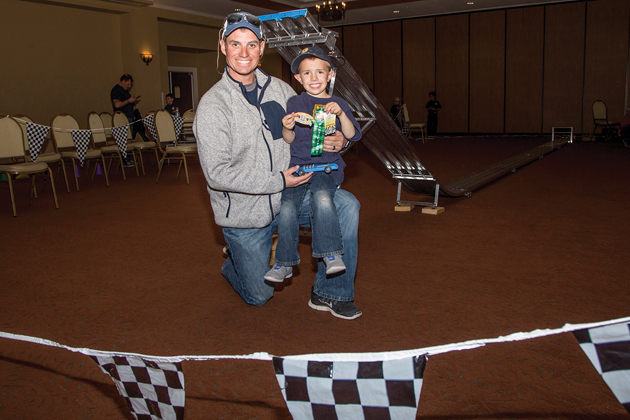 The Pinewood Derby is a time-honored tradition of the Boy Scouts.

The pinewood derby cars were built from kits. Derby kits included an unfinished block of wood and some hardware to fashion into a race car. Each car could weigh no more than 5 ounces and be no longer than 7 inches, nor exceed 2.75 inches in width. One spectator commented from the crowd that a well-crafted “wedge” will win every time.

The track was aluminum with an electric timer for monitoring. Each car raced on each of the four lanes on the track to indicate which car was fastest. The final race was a runoff between the four fastest cars.

Sgt. 1st Class Kenny Whippo, from Operations Group, helped his 5-year-old son Daniel, who is a Lion Cub, build his car between “refits”. He said it was challenging to find time to finish and that they were still making additions the morning of the race.

“Daniel helps a lot with woodworking projects,” said Whippo, who is a former carpenter. “It helps keep him focused and fosters his attention skills. Daniel has endless energy.”

Daniel named his car Blaze. He said he had fun making his car, which weighed 4.7 oz. When asked what made it special, he replied it was “the fishing sinkers” he and his dad had drilled into the car to make it go fast.

During the excitement of the race, the scouts watched their cars race down the aluminum rails from behind black and white checkered flags that surrounded the track. In the end, it was 10-year-old Dominic Martinez who won first place overall. Dominic said that he just wanted to win, so he picked a wedge style car. He and his dad, Air Force Staff Sgt. Sergio Martinez, cut the car, added wheels, and taped coins to it to make it more aerodynamic.

“Older kids tend to lose interest in the decorating and just want to win,” Staff Sgt. Martinez said. This is Dominic’s last year as a Cub Scout and he will soon be graduating to Boy Scout.

The final winners of the derby races were:  Dominic Martinez, 1st place; Jack Chandler, 2nd place; Jude Schmitt, 3rd place. All of the scouts received ribbons and patches for participating in the derby.