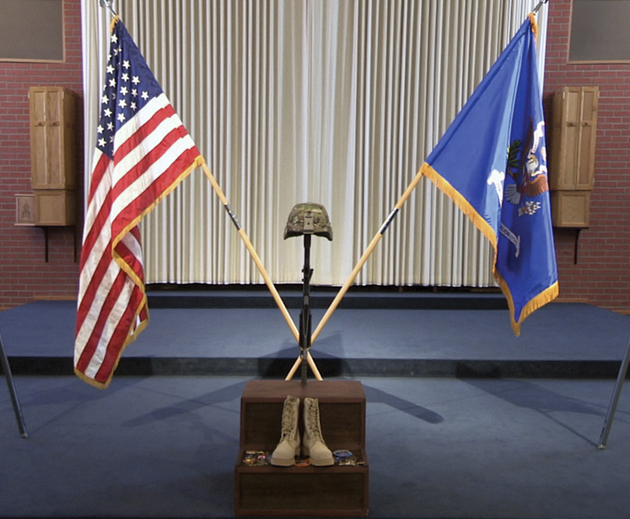 Majak, 32, was loved by many. His family and fellow Soldiers described feelings of heartbreaking loss during a memorial ceremony held at Fort Irwin’s Center Chapel Feb. 21.

“All too soon he departed us and his family,” said Lt. Col. Eric Vanek, 2916th Aviation Battalion commander. “But not before he forged the bonds of everlasting friendship and brotherhood within B Co. 229.”

Majak joined the U.S. Army on March 30, 2015 and, after a year of Basic Training, Advanced Individual Training and Unmanned Systems Repairer Training, was assigned to the “Flying Tigers” at the National Training Center. He was an expert at his craft, with an enthusiastic and determined personality, according to CW4 Luis Iglesias, B229 commander (Rear-Det). Fellow Soldiers knew him as a mentor and leader.

“He was very passionate about the aircraft and devoted his time to learn their ins and outs,” Iglesias said. “He very quickly became a fully mission qualified crew chief. He was a true friend and warrior.”

However, perhaps Majak’s greatest role to his unit was friend and morale booster. Iglesias recalled that Majak was often the designated DJ, playing music by Vicente Fernandez, a famous Mexican folk musician. It brought energy to the work place when everyone had to stay late, he said.

B229 deployed in support of Operation Inherent Resolve last October. When dealing with the struggle of being separated from family on deployment, Spc. Michael Jackson, a Wheeled Vehicle Mechanic, said Majak became someone he could trust and talk to, keeping his mind off of the negatives.

Majak is survived by his father and two brothers, Carl Jr., who is currently serving in the U.S. Army, and Andre Majak, a veteran and now firefighter.

With no bullets, Mobile High-Energy Laser shoots drones from sky