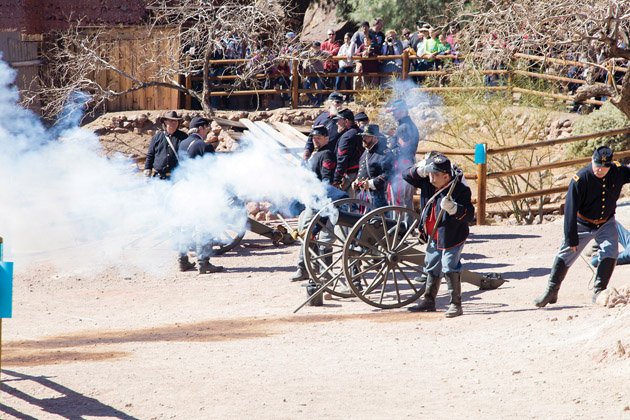 The town’s Civil War Days were held Feb. 17-18. Upon entering the park, attendees were greeted with the sound of bugles, drums and spirited violins as civilian and enlisted reenactors played period melodies and battle hymns. These hymns were often played to issue marching orders, or to simply boost morale. During the actual Civil War, musical duels were often heard across battlefields during the still of the night. Sometimes there was dancing in the street as both sides engaged in recreational activities.

Reenactor Jesse Howard, from Hemet, said that while in play they strive to live as authentically as possible, sleeping on bedrolls and cooking on open fires. During the battles at Calico, his troop played Confederate soldiers of the 8th Alabama “Emerald Guard”.

Howard said that whether they play the North or South greatly depends on how many groups show up. There are over 400 reenactors in the ACWS, and approximately 250 participated in the Calico reenactment. All the reenactors play both sides from time to time and are required to maintain both Union and Confederate attire and equipment.

During the second battle, ACWS soldier Michael DeGregorio represented the Washington Artillery of New Orleans. DeGregorio acted as a Union soldier shooting a 3-inch Ordnance cannon, which was one of the most used cannons in the Civil War.

DeGregorio explained that the reenactors go through roughly the same training Civil War soldiers would have received. They take a written test to ensure they are abreast of safety standards before heading out for their field training. In the field, a senior enlisted soldier instructs the re-enactors how to load and fire the canons, which is a three-person job. Until the soldiers are proficient, they are required to have a trained senior reenactor assist in firing. Even though they are blank rounds, all necessary safety precautions are implemented.

The battles played over the weekend in Calico were not based on a historical battle, as California’s participation in the Civil War was minimal. The Union soldiers in California primarily patrolled trains ensuring the Confederate soldiers in Arizona did not gain access to gold being transported in from Mexico.