FORT IRWIN, Calif. — A chilly Mojave Desert greeted more than 4,000 Soldiers as they prepared to aggressively face a world-class opposing force during a grueling month-long exercise at the National Training Center (NTC).

The “Raider” Brigade Soldiers focused on unified land operations, which simultaneously incorporate offensive, defensive and stability operations in support of civil authorities, providing the brigade with challenges ranging from the technical to the tactical, logistical to ethical. The exercise spanned a 642,000-acre training area with the stress on the unit increasing minute by minute in a design to create the worst-case scenario.

“Repetition leads to competence, competence leads to confidence, and confidence leads to a mastery of skills.” said Col. Monte’ Rone, 1st SBCT commander. “It is important we take training rotations, like this one, at NTC seriously in order to become more proficient and make a more lethal unit that can win anytime, anywhere, against any adversary.”

NTC remains unique among Army training centers due to its ability to host tough, realistic, unified land operations in a fully immersive cultural environment with technologically advanced and elaborate facilities. There is also a dedicated and trained opposing force (OPFOR) and a brigade of observers and trainers to provide feedback.

The Raiders started their training with the nonlethal element, which consists of public affairs, electronic warfare, civil affairs, psychological operations and military information support operations, to mitigate real-world scenarios such as civil demonstrations, protests and conflicts and the necessity to disperse large crowds potentially posing a threat.

“NTC provided a valuable training environment which allowed the brigade to effectively leverage all the information-related capabilities from active-duty, Reserve and National Guard elements from multiple posts,” said Capt. Nelson R. Godbolt, brigade electronic warfare officer. “When 1SBCT deploys it will leverage these capabilities to enable the brigade’s operations and freedom of maneuver.”

The Soldiers took on the opposing forces only five days after arriving at Fort Irwin. The OPFOR attacked day and night with tanks, aircraft and ground forces. As the force-on-force battle continued, command posts “jumped” and re-established their locations to prevent the enemy from finding their positions.

The culminating event was a combined live-fire exercise executed by the entire brigade. Javelin missile systems, M777 155 mm howitzers and Stryker mortar carriers, to name a few pieces of equipment, were used to seize towns and destroy the enemy.

“The live fire at NTC was an extremely valuable training opportunity,” said Maj. Nickolas Welch, brigade fire support officer. “Nowhere else in the Army do brigade combat teams get the chance to fire live artillery munitions in direct support of their maneuver battalions as they execute a tactical mission … it’s an incredible opportunity to simultaneously integrate live artillery fires with rotary wing assets, mortar fires and direct fire weapon systems.”

The training allowed the Raider Brigade Soldiers to hone their skills prior to a deployment to Afghanistan this spring. 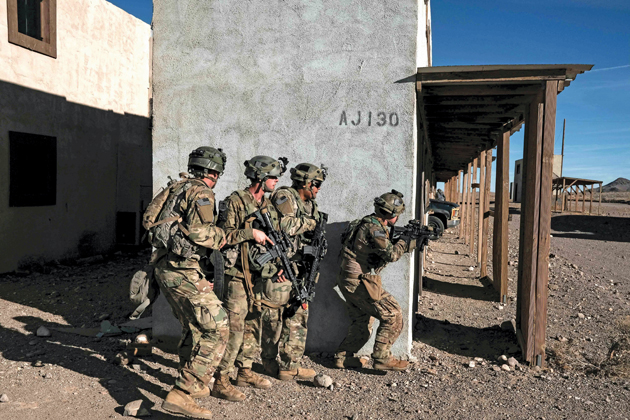