FORT IRWIN, Calif. — Rising more than 3,000 feet above the surrounding desert, Tiefort Mountain is a constant backdrop to life at the National Training Center. Its twin peaks are often off-limits due to their location in the “Box”, but when weather and training schedules allow, guides from Fort Irwin’s Outdoor Recreation lead group climbs to the summit.

The trips are a draw not only for Soldiers and family members who live on post, but also for hikers who hail from across California and the Southwest. Those who took part in the most recent hike, held Feb. 3, were treated to unseasonably warm, mild weather. The group arrived at the Outdoor Recreation facility for an early morning meetup and then carpooled to the base of the mountain.

From the trailhead, the climb begins almost immediately. The path ascends a steep ridgeline over sharp rocks and loose scree. The surrounding hills drop away to reveal views of Bicycle Lake, Fort Irwin and the Central Corridor as the elevation increases, and red barrel cactus dot the mountainside. The lower of the two summits offers a brief respite before the trail traverses a saddle ahead of the final push to the top. In all, it’s a 3,047-foot climb in just over 2.5 miles.

The 360-degree views at the summit are worth the effort, said Sgt. 1st Class Ian Mallari. After nearly four years traversing the “Box” with the 11th Armored Cavalry Regiment, he completed the hike just days before he was scheduled to move to Fort Benning, Ga. It had long been on his bucket list, and he joked he wasn’t leaving Fort Irwin without making the climb.

“Every hill I see, I have climbed it already, and [now] I’m looking down on top of it,” Mallari said. “So it is an achievement for me, seeing all those hills I have climbed for the past three years and a half since I’ve been here.”

“I’m going to miss this landscape,” he added.

About a half dozen of the other hikers on the trip were checking Tiefort off a different kind of list. They were “peakbaggers”, a subset of hikers who focus on attaining all of the summits on a predetermined list of locations.  The sport dates back to late 19th-century Scotland, but there are now myriad types of peakbagging lists. Some, for example, focus on desert peaks. Others include all of the peaks in a given area, such as the state of California. The peakbaggers hiking Tiefort were completing a list of “P2K” peaks – that is, peaks with more than 2,000 feet of prominence above the surrounding landscape.

“You don’t hike the same thing week after week,” he said. “I’m always going to a different peak.” 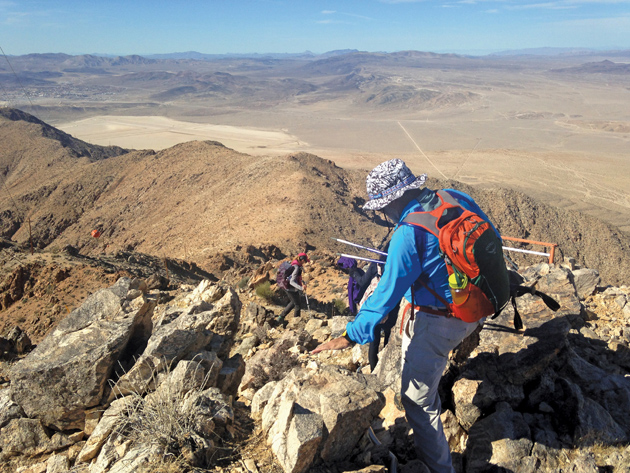 Hikers descend the steep slopes of Tiefort Mountain after a hike to its summit led by Outdoor Recreation Feb. 3.