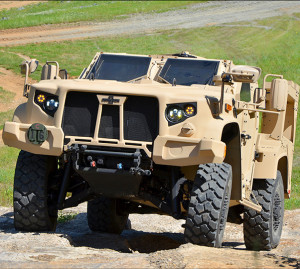 The JLTV is a joint military program that will partially replace the High Mobility Multipurpose Wheeled Vehicle with a family of more survivable vehicles with greater payload, according Randall Fincher, test officer with the U.S. Army Operational Test Command, based out of Fort Hood, Texas.

Marines from 1st Battalion, 7th Marine Regiment are joining with Soldiers from the 1st Squadron, 33rd Reconnaissance Regiment, 3rd Brigade, 101st Airborne Division to run the JLTV through its paces by conducting real-world missions in an operational environment.

“Data collected will be used to address operational effectiveness, suitability and survivability of the JLTV in its intended environment,” said Fincher.

Fincher said the operationally realistic scenarios will allow the test unit Marines and Soldiers to tell the Department of Defense how well the system supports their mission execution. 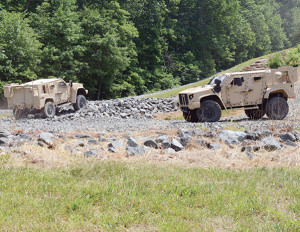 “One of the most important elements of the test is Marine and Soldier feedback of how the JLTV performs in support of their missions,” he added.

“This will likely be the largest single test event conducted by USAOTC, which at one point will involve over 680 personnel,” said Jerry Morris, chief of USAOTC’s Sustainment Test Division.

“The Marine and Army test units will conduct three multi-day missions that will consist of several force-on-force scenarios in each mission set. They will also conduct live fire and helicopter sling load operations, as well as a Marine Amphibious Landing mission at Camp Pendleton, Calif.,” Morris added.

Testing will also include a Real Time Casualty Assessment System coupled with a computer simulation that will provide engagement results, indirect fire effects and depict friendly adjacent forces, which will provide a more robust operational picture, according to Morris.