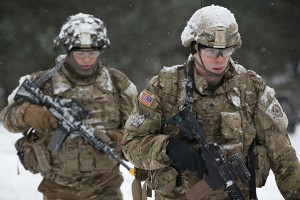 U.S. Soldiers assigned to Lightning Troop, 3rd Squadron, 2nd Cavalry Regiment, move from one position to another while pulling security during Command Post Exercise Weasel near the Bemowo Piskie Training Area, Poland, Feb. 6, 2018. Training exercises such as this will continue to help Soldiers increase their lethality for future combat, according to Gen. Stephen Townsend.

“Our troops need equipment that is more effective — lighter, faster and smaller. That is going to be a theme of mine,” said the commander of U.S. Army Training and Doctrine Command.

Over the last 15 years, the Army prioritized systems and gear that would enhance the ability of troops to survive, he continued. “Probably in the counterinsurgency environment, that’s the right choice.”

But going forward, that’s not going to be adequate, he said. “We’re not going to be able to just armor ourselves up in MRAPs and whatever else. We’re going to have to be more mobile and faster and lethal, [we’ll need] a better balance of those elements.”

Network transformation
The lighter, faster, smaller theme applies as well to the Army network, Townsend said. The current network is slow, clunky and takes too long to set up.

Townsend said he remembers how slow and inefficient the Army network seemed even back in the early days of his own career. Back in 1986 as a lieutenant, Townsend said he participated in Operation Urgent Fury in Grenada. The network the Army was using then couldn’t talk to the Marines or to the Navy fighter pilots providing air cover, he said.

While the network has improved much since his time as a lieutenant, Townsend said there are still problems linking with other services and coalition partners.

More recently, when Townsend commanded the 10th Mountain Division at Fort Drum, New York in 2015, he said he decided to give the division’s command and control network a test to see how well it worked.

The C2 system was set up next to the division headquarters in a parking lot, he related. It wasn’t a full-blown test, because just a representative number of network nodes were set up. Still, it took nearly all of the division’s signal personnel a week to set it all up and get it working. Additionally, more than 20 field-service representatives had to be flown in from across the country to get the system up and running.

“That’s on the division parking lot in the daylight,” Townsend said. “Not in the field, in the dark, under fire.”

This past year when he commanded Combined Joint Task Force — Operation Inherent Resolve, he said it proved difficult communicating with the 30 or so partner nations who were involved in the fighting in and around Mosul, Iraq, and Rakka, Syria. “We had to do all kind of workarounds to communicate with each other.”

Besides that, the network required too much power to work, had limited range and bandwidth, and was too dependent on satellite uplink, he said.

At times, in Iraq and Syria, adversaries even achieved superiority over coalition forces in cyber and electronic warfare, and sometimes even air superiority, he added.
“Those experiences have formed what I think about this,” he said.

The Army’s network has to reach the level of user effectiveness like that achieved by today’s smartphone, he said.

To get that done will require collaboration with industry and other partners under the leadership of Future Command’s Network Cross Functional Team, informed by Soldier feedback.

Without an effective network, nothing else will work, including the other Army top priorities, he said: long range precision fires, next generation combat vehicle, future vertical lift, air and missile defense and Soldier lethality. 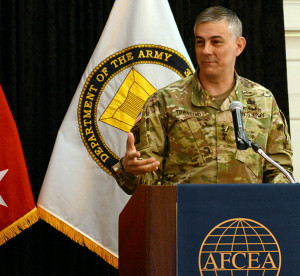 “I love the command training centers. They’re important,” he said. But he also said that more emphasis will need to be placed on home-station training.

If war breaks out in Europe or on the Korean peninsula, Townsend said, there won’t be time to put brigade combat teams through CTC rotations. Those units will need to deploy from home station.

Townsend also said that for future conflict, Soldiers will need to train up on new capabilities like telemedicine. There were not enough surgeons in Mosul last year, he said, and telemedicine could have alleviated some of that problem.

Townsend explained that telemedicine involves medical practitioners in the field linking by video back to experts who are stationed stateside or in Europe, and then being walked through medical procedures that might have otherwise been too complicated for on-scene medical personnel to complete on their own.

Another force enabler Soldiers will need to train up on, Townsend said, is the use of 3-D printers. He said the Marine Corps is deploying with the capability to produce spare parts by 3-D printing. Recently, Townsend visited the Soldier Lethality Cross Functional Team and saw a 3-D printer turning out ammunition casings.

Transformative soldiers
Lastly, Townsend said that although modernization matters, so do the Soldiers themselves, without whom wars cannot be won.

Townsend said that many believe that U.S. and coalition forces decisively won the Persian Gulf War because of modern technology. But the general said he believes that even if the U.S. had the same equipment the Iraqis did, they still would have won because of the high level of training, leadership and initiative of the U.S. Soldier.

Illustrating this point, he said that about 13 years ago when he was the commander of the 3rd Stryker Brigade Combat Team at Joint Base Lewis-McChord, Wash., the I Corps commander asked him to show a visiting Russian general some of his C2 capabilities.

Townsend said he let his sergeant, a vehicle commander, explain the Blue Force Tracker system that was installed inside a Stryker combat vehicle.

The Russian general asked why the Soldiers were seeing the location of the allies and enemies. He said only the commanders should be seeing the battlefield picture and was amazed by what the sergeant was showing him.

Townsend said the reason that Soldier had access to the battlefield picture is because mission command, and mission success, ultimately relies on every Soldier using commander intent and initiative.

“No one does this better than the Army,” he said.