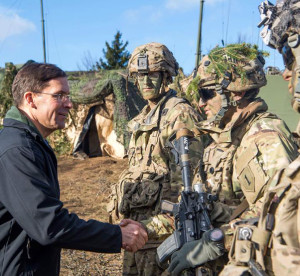 Secretary of the Army Dr. Mark T. Esper meets with U.S. Army Soldiers in the field. Esper spoke at the Center for Strategic and International Studies in Washington, D.C., March 12, 2018, for a public discussion on modernization, military budgets, and the current state of military operations.

The Army is grateful for increases offered in the Fiscal Year 2018 budget, said the service’s secretary, but added greater flexibility on how to use that money is needed to make the best use of it.

“Giving us flexibility — and there’s a lot of talk on the Hill of doing that — to spend those dollars, in my mind, will make sure we spend it smartly, more effectively,” said Secretary of the Army Dr. Mark T. Esper. He also said that with more flexibility in spending ,he will be able to provide “better training for my Soldiers, better maintenance, and I can deliver better outcome for the taxpayer.”

As part of a discussion March 12 at the Center for Strategic and International Studies in Washington, D.C., Esper, along with other service secretaries, spelled out what Congress might do to help their services besides additional funding.

Esper said he is looking for legislative assistance in the future, possibly with revisions to the Defense Officer Personnel Management Act, as a way to better manage personnel and talent in the Army.

In the short term, Esper said there may be a need for legislative changes that will allow the Army more flexibility in the way it conducts acquisition, especially as the Army plans to stand up its Futures Command this summer. The new command is expected to go a long way toward furthering the Army’s six primary modernization goals.

“I think helping us follow through and overhaul the acquisition system, geared toward Army Futures Command and what we are building, would be helpful,” Esper said. 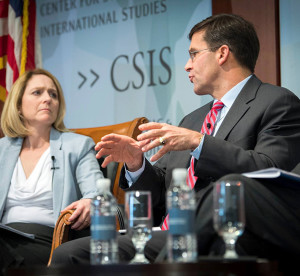 Secretary of the Army Mark T. Esper speaks with Kathleen H. Hicks of the Center for Strategic and International Studies in Washington, D.C., March 12, 2018.

Also in October, the Army announced it would stand up a new command this summer called the Army Futures Command. This command would bring the pursuit of those modernization goals and other goals that arise in the future under one roof, as well as the acquisition efforts that will be needed to move them all forward.

Esper told those at the CSIS event that now is the right time for the Army to build Futures Command.

“The Army has had its share over the years of good programs,” Esper said. “But we’ve also had our share of programs that have gone bad. Billions of dollars spent, years behind delivery, or maybe a product never appearing.”

Future Combat Systems and the Comanche helicopter program are examples of failed programs, he said. Failed programs such as these “hurt us from a fiscal standpoint,” Esper explained. “And it’s denied the Soldiers the tools, equipment and weapons systems he or she needs to be effective on the battlefield.”

Army Futures Command will solve the problems that led programs like Comanche or FCS to fail, he said. Right now, Esper noted that the critical components for Army acquisition are spread through multiple commands.

“What we are proposing to do with Army Futures Command is to pull in all those disparate elements that are critical to the modernization process and put them under a single command, with a single person in charge, a single general officer, who is now responsible, and who is accountable to me and the chief of staff of the Army for delivering those products on time and on schedule within the key performance parameters,” Esper said. 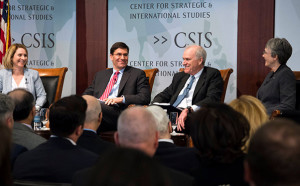 Secretary of the Army Mark T. Esper speaks with Kathleen H. Hicks of the Center for Strategic and International Studies in Washington, D.C., March 12, 2018. Esper, along with Secretary of the Navy Richard Spencer and Secretary of the Air Force Heather Wilson, met for a public discussion on modernization, military budgets, and the current state of military operations.

The new command “really promises us the ability to deliver what the Soldier needs, when he or she needs it,” he added.

Best soldiers
Esper also said that while other nations and potential adversaries may continue to develop new weapons systems — which the U.S. will match — what sets the U.S. military apart from other military forces is not gear, but people.

“I think what distinguishes our military, which makes us the premiere fighting force in the world, which guarantees, I’m confident, that we will prevail in any conflict, is the quality of our service members, of our Soldiers, Sailors, Airmen and Marines,” Esper said. “They are, bar none, the best in the world. They are smart, they are aggressive, they are persistent, and they have a lot of grit.”

Esper said he Army needs modernized gear for Soldiers, and he plans on getting the Army started in that pursuit. But what the Army also needs, he said, are “a lot of these service members.”