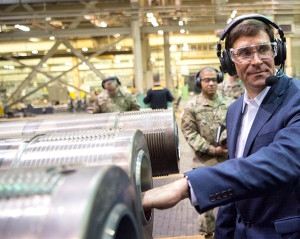 Secretary of the Army Dr. Mark T. Esper March 30 made his first visit to the Army’s historic Watervliet Arsenal in New York to assess the arsenal’s ability to support the rising readiness challenges facing today’s and tomorrow’s Soldiers.

His visit could not have been more timely, as the secretary announced earlier in the week at the Association of the United States Army Global Force Symposium in Alabama that the Army will stand up a new command called the Futures Command.

During Esper’s visit, he met with senior military leaders from U.S. Army Materiel Command, Tank-Automotive Armaments Command, and Watervliet Arsenal. This engagement gave him a great opportunity to provide his insight into the roles and responsibilities that he sees for the arsenal as the Army transitions to fight and win decisively against any adversary, anytime and anywhere in a joint, multi-domain, high-intensity conflict.

Esper said that he is focused on modernizing the Army in six areas, which include long-range precision fires, a next-generation combat vehicle, future vertical lift platforms, a mobile and expeditionary Army network, air and missile defense capabilities, and Soldier lethality. The arsenal is directly tied to three of those modernization efforts: long-range precision fires, next-generation combat vehicle, and Soldier lethality.

“No other manufacturing center in our country has more experience in transforming its capabilities at critical times in our nation’s military history than the Watervliet Arsenal,” said Esper. “Now is one of those times when I need the arsenal to transform, once again.

“In regards to our improving our current technology with our indirect fires systems, and with our armor force as well, Watervliet provides a critical role because we will be looking to the arsenal to provide tubes … to improve the readiness of our current fleet and then help us envision the future and get to where we can defeat with long-range precision fires,” Esper said. 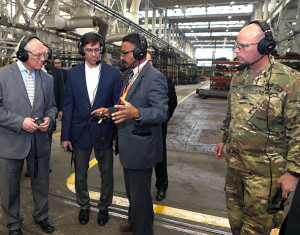 Esper took multiple opportunities to praise the arsenal workforce for the great work they are doing today to support Soldier readiness.

“What I saw today reinforced in my mind the value of the arsenal being an Army-owned and operated manufacturing center,” Esper said. “Whether it was making saddles during the 1800s or working today on the Army’s future weapon systems, whenever the Army needed the arsenal to shift its priorities and production this great workforce made it happen.”

During Esper’s visit, he toured several arsenal manufacturing facilities where he witnessed the forging of a howitzer tube and the rough and finish machining of howitzer, tank, and mortar tubes. Additionally, he observed some of the great work that arsenal artisans are doing to support Army modernization programs.

The Watervliet Arsenal is an Army owned-and-operated manufacturing facility and is the oldest, continuously active arsenal in the United States. It began operations during the War of 1812, and celebrated its 200th year of continuous service to the nation on July 14, 2013.

Today’s arsenal is relied upon by U.S. and foreign militaries to produce the most advanced, high-tech, high-powered weaponry for cannon, howitzer, and mortar systems. This National Historic Registered Landmark has an annual economic benefit to the local community in excess of $90 million.