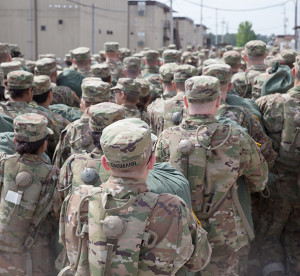 The Army wants Soldiers who complete basic combat training and advanced individual training to be ready to deploy “on day one” once they reach their units, said Secretary of the Army Dr. Mark T. Esper.

As such, the Army is considering lengthening training so that new Soldiers are better indoctrinated into Army culture and values, are physically fit, and technically and tactically more proficient, he said.

Esper spoke of the Army’s future vision at an Association of the U.S. Army luncheon April 3.

Regarding the fitness aspect, Esper lamented that the current generation of young people are not as physically fit as youth of the past. In order to increase fitness for combat and reduce injuries, the Army is moving to introduce a new physical fitness regimen that correlates more closely with the rigors of combat.

About a week ago, the secretary said he worked out with Soldiers at Fort Drum who were using this type of combat fitness training. He said he was impressed and would like to see that type of training adopted Army-wide.

Partly due to fitness issues, only 29 percent of America’s youth are eligible to serve and only 4 percent of the population are both eligible and have the proclivity to serve, he said.

The low percentage of proclivity to serve, is due in large measure to lack of family or friend role models, such as uncles or grandparents who are veterans, he said. He noted that another factor is myths about people in uniform not functioning well in society after they transition.

In order to reach out to youth and their parents, he said the Army will take a more proactive approach to recruiting and marketing.

Hiring reform
Esper spoke about a number of other topics during a question and answer period.

The entry process for Soldiers and Army civilians is broken, he said. On the Soldier side, the Army is moving to a talent management system in which military occupational specialties and assignments are predicated on “knowledge, skills, attributes and preferences to better marry up the needs of the Army with the individuals.”

On the civilian side, he said it now takes an average of 140 days to hire someone, discouraging many from service. He said he’d like to get that down to just a few weeks.

Service reform
Esper said Soldiers are making permanent-change-of-station moves too frequently and he’d like to slow the pace.

Slowing the pace, he said, would give more time for Soldiers to form unit cohesion. It would also give spouses more time for their careers and be less disruptive for kids in school.

Regarding required online training, Esper said there’s just too much. He wants noncommissioned officers to do more of the training face-to-face with their troops. “The Army NCO Corps is the best in the world bar none,” he said.

Esper also wants NCOs to be with the troops after hours and on weekends in the barracks, to coach and mentor them and keep them out of trouble.