FORT IRWIN, Calif. — More than 700 Marines and Sailors joined forces with the 11th Armored Cavalry Regiment during a February training rotation at the National Training Center. The exercise helped enhance interoperability in terms of communications, tactics and operations for both joint service partners.

As the NTC’s professional opposing force, the 11th ACR’s job is to give Army brigade combat teams their worst day in combat. They do so 10 times a year, 14 days at a time, facing approximately 50,000 service members and allied partners who take advantage of the near-peer, conventional warfare training.

Lt. Col. Mark Liston, commander of the 2nd LAR Battalion, said there have been interoperability challenges working with the Army in the past, but returning to the NTC has improved tactical communication equipment barriers.

“It’s something we learned last year, our communications equipment operate in different wavelengths and frequencies as far as encryption,” said Liston. “It’s a lot of work for us to make sure we are nested with the exact communications as the Army, but it has paid off quite a bit from last year.”

In addition to overcoming communication obstacles and identifying other small fractures in interoperability, Lt. Col. Rodney Morgan, commander of 2nd Squadron, 11th ACR said fighting side by side with the Marines also challenges his Soldiers.

“One of the advantages we [11th ACR] have is repetition. That’s what makes a football team good,” said Morgan. “I have commanders and platoon leaders who are basically going to run the ball into the end zone, just because they do this all the time. So when all of a sudden you have to hand the ball off to somebody that doesn’t know the playbook, it forces you to become a good teacher to bring somebody into the fold really fast.”

Morgan added that it’s important to identify issues at the NTC before actual combat. Working hand in hand with the Marines helps Soldiers “understand the differences in [Marine] training, ethos, and how they fundamentally look at problems.”

The 2nd LAR also conducted their own Marine Corps Combat Readiness Evaluation Exercise (MCCRE). Liston, commander of the 2nd LAR Battalion, said it’s all part of a 24-month evaluation, focusing on the ability of a combat unit to execute tasks from the individual all the way up to the collective battalion level.

“We can do [MCCRE] at our home station against another unit, but the scenario at the National Training Center provides the most comprehensive evaluation of a realistic enemy that wants to win,” said Liston.

This year marks the second time the 2nd LAR has trained at the NTC.

“Overall, this was worth the time and energy put into it,” Morgan concluded. 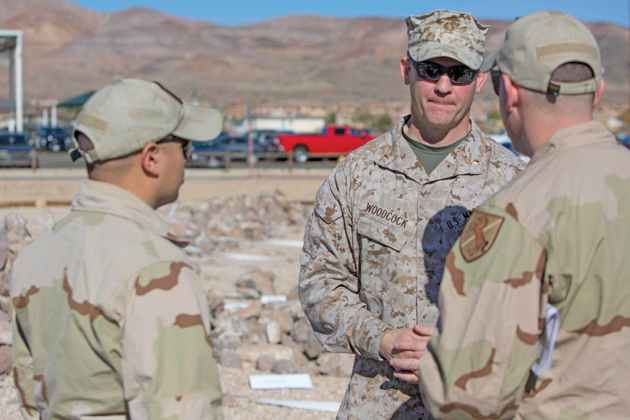 Maj. Douglas Woodcock, the operations officer with 2nd Light Armored Reconnaissance Battalion, 2nd Marine Division, debriefs with Army officers during a deployment for training exercise at Fort Irwin, Calif., Feb. 6, 2018. Marines used different camouflage techniques to compensate for the desert environment and dealt with cold and windy weather conditions. The purpose of the DFT was for Marines with 2nd LAR to assist Soldiers with the 11th Armored Cavalry Regiment in their ability to conduct a wide-area offensive and capture an open objective.