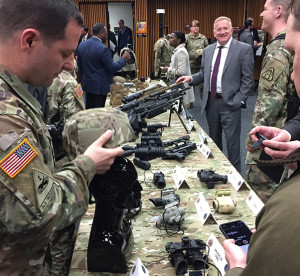 All of this is in support of the Defense Department’s priority of building a more lethal force. Much of the equipment that was on display outside the Night Vision Lab is also part of the Close-Combat Lethality Task Force established by Defense Secretary James N. Mattis.

McCarthy said he wanted to meet the scientists, engineers and subject matter experts. “Normally, you are in the Pentagon and you are making decisions based on what’s on a Power Point slide,” he told reporters at the event. “Now, I have experience in this, but nothing is better than going out and talking to the people involved in the project. … I was in the infantry, and a lot of this stuff will be the next generation of stuff we will use.”

McCarthy saw three of the investment projects related to the cross-functional teams. “I’m very encouraged,” he said. “I think the rigor behind the investment decisions is better because the requirements community is much closer to the acquisition folks.”

The smaller teams also mean better products and products that feed off each other, and the teams are synchronizing these capabilities, he said. This will improve the products and make it easier to see how the projects land on the technological roadmap for future upgrades.

Synthetic training environment
The undersecretary used the example of building a synthetic training environment. This will allow service members to run through an operation in the virtual world long before they board a helicopter for insertion into combat. “It’s bringing a lot of what we learned in the aviation community to the infantry and the armor, and it is much more cost-effective as well,” he said.

Enhanced binocular night-vision goggles not only will allow soldiers, Marines and special operators to perform better at night, but also will be integral to the synthetic training experience, McCarthy said. The system will fuse synthetic training into the goggles so service members will train on systems they will take to combat.

“It will also be able to capture information so we can evaluate a soldier’s performance in training and when they are actually out there firing live bullets,” he added. “It will give commanders more information and help soldiers improve.”

The bottom line is the Army wants to pull more capability as soon as possible, and a lot of the information must come from practical application. “We need to put these things out there and test them and see how they really work,” the undersecretary said.

If the equipment marries together an operational and technological concept, the service will fight for the capability, McCarthy said.

Faster process
The process is moving faster. The enhanced binocular night-vision goggles will be in the hands of infantry, Marines and special operators beginning a year after being first proposed, an official with PEO Soldier said. This is lightning fast in the DoD acquisition world.

“For the restructuring effort at the macro level of the Army, we tried to bring organizations closer together,” McCarthy said. The organization brought tasks and requirements under one roof.

“That’s how we are reducing how long it takes to make a decision,” he said. Allowing the cross-functional team leaders to make decisions brings responsibility down three layers.

“The challenge we have had is all the people involved in the decision,” he said. “That is why it takes years between each milestone, because you are just passing information back and forth. If there are 50 inputs, do they all have to be in there? If not, then reduce the number of inputs required and leave the risk with senior leadership where it belongs.”

The department needs to trust leaders to make hard choices, McCarthy said. “We can’t afford to spend seven years thinking about a requirement,” he added. “If it is going to take that long, you are probably not going to get it. So we need to get these capabilities sooner.”

With the larger projects in particular, this one change has the potential to take years off the decision cycle with more accountability, he said. “The environment we created allows for more sharing of ideas,” the undersecretary said. “It is a big cultural issue for us, and the best is that everyone is embracing it.”