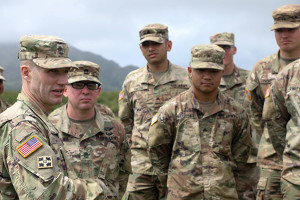 Esper and Sergeant Major of the Army Daniel Dailey briefed reporters on recruiting, retention and equipment during the Pentagon news gaggle.

The Army is addressing readiness issues, the secretary said, but it is still the most potent fighting force in the world. “If we got the call today, the Army would deploy, fight and win in any conflict,” Esper said. “I am completely confident of that.”

Readiness in the service is trending up, he said, and if the promised levels of funding continue “and demand remains stable, we’ll be in good shape,” he said.

The Army is growing and accessions to the service are strong. “Quality remains number one, we are not lowering standards in any way, shape or form, to meet recruiting numbers,” Esper said. Officials up and down the command chain and in the Army Recruiting Command understand that message.

“I have raised … the standard with regard to [category] 4s and directed the Army recruit no more than 2 percent moving forward,” Esper said.

The goal for this year was 80,000 recruits. However, that goal dropped to 76,500 due to a less than planned for end strength for the Army and improved retention. Congress authorized an increase of 7,500 soldiers this year and the Army had planned for 10,000. “We can’t exceed end strength, so we had to drop the goals,” Dailey said.

Typically, the service sees a retention rate of about 81 percent. It is at 86 percent. “That’s good news,” Esper said. “It tells me that our soldiers like what they are doing and like their service in the military. This also lowers the numbers the service can recruit.”

Esper noted that with active duty retention higher than anticipated, it may mean problems in the future with recruiting into the National Guard and the Army Reserve.

The higher numbers are needed for the senior service as the Army is the “most in-demand service” by combatant commanders, the secretary said. Between 50 and 60 percent of the requirements from the combatant commands involve the Army. “There is a mismatch between supply and demand,” he said.

The active duty Army force is set at 483,500 service members this year, with another 4,000 soldiers added next year. “My view is we need to be above 500,000 with associated growth in the Guard and reserve,” Esper said. “Once we get above that number it gives us a lot more breathing room to do what we need to do.”

Hamster wheel
The challenge right now is “you see our soldiers on this hamster wheel of constant deployment churn,” the secretary continued.

The Army is looking at ways to make combat formations more robust to deal with the possible high intensity conflict of the future. The Army is looking to add more engineers, artillery, cyber warriors and air defense to units, Army officials said.

The big deployments are over – there is no longer 200,000 troops in Iraq or 150,000 in Afghanistan, but there is still a lot of demand. At any one time, three armored combat brigades are deployed – one in Korea, one in Europe and one in Kuwait. “Then we are still rotating infantry brigade combat teams to Afghanistan and Africa,” Esper said.

There is also demand for troops in Pacific Pathways missions, to work with partners in Asia. “Our soldiers are on the go all the time with named operations and with training,” he said. “We like to say at any one time there is more than 100,000 soldiers deployed around the world. If we can grow the force, it means we can put fewer soldiers on that hamster wheel.”

The service is also increasing the lethality of the force it does have. The Army, Marine Corps and Special Operations Command are all working with the Close-Combat Lethality Task Force, commissioned by Defense Secretary James N. Mattis.

The task force is helping the service define what the close-combat fight will need in the 21st century, Dailey said. “As we move forward, we need to synchronize our efforts with what the Marine Corps is doing, so we use all the capabilities our soldiers need,” the sergeant major of the Army said.

Equipment upgrades
Both Dailey and Esper have infantry experience and equipment upgrades are particularly dear to their hearts. “We’re making progress now,” Esper said. “We are going to seek a reprogramming to buy enhanced night vision goggles – binocular for the soldiers that will give us enhanced lethality on the battlefield. This summer we will be contracting for the squad designated marksman rifle. We will begin prototyping soon the next generation squad weapon and the same time I have seen the production of the new helmet,” he said.

“We are doing a number of things now through our cross-functional teams to improve the survivability and lethality of the individual soldier and the squad, which is totally consistent with the broader task force that this is nested in,” Esper said.

And the process is moving quickly. “The biggest place you lose soldiers on the battlefield is the infantry and it is usually that last 500 meters,” the secretary said. “That’s why it is so important to the secretary of defense and important to us as infantry to prepare our soldiers and invest in them as much as we can so they are more capable, more lethal and survive better on the battlefield.”