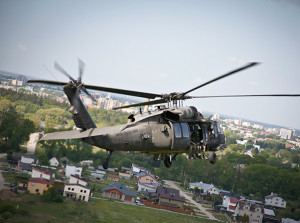 Soldiers ride in a U.S. Army UH-60 Blackhawk helicopter during an exercise in Lithuania, May 20, 2016. Helicopters such as these must all be modernized if the Army wants to stay competitive, say senior Army leaders. The Army has created the Future Vertical Lift Cross-Functional Team to help further its Future Vertical Lift modernization priority.

What Army aviation needs now is an aircraft that “can cut through an integrated air defense network and overcome anti-access, area-denial threats to dominate the corridor for the maneuver force to flow through,” said Brig. Gen. Walter T. Rugen, director of the Army’s Future Vertical Lift Cross-Functional Team.

The general described the four categories of FVL that will help the Army achieve its aviation goals for the future.

The future unmanned aircraft system, category 1, will actually be a family of UAS types. They will be built to operate in dangerous airspaces and in degraded environmental conditions, he said.

Advanced UAS, category 2, “will be the premier targeting and electronic attack assets in a phase 3 fight, by surveilling, protecting and attacking across multiple spectrums,” he said. A “phase 3 fight” means offensive combat operations.

A future reconnaissance attack aircraft, category 3, will be built, as its name suggests, to perform attack and reconnaissance missions, and to engage in electronic warfare, Rugen said.

Furthermore, this category 3 aircraft will “be sized to hide in the radar clutter and operate in [the] canyons of megacities,” he said.
A future long-range assault aircraft, category 4, will be built for lift, assault and medevac, he said.

While specific requirements have not yet been crafted, all FVL will, in general terms, be intuitive to operate and be built to outperform current aircraft in speed, low radar signature, payload, survivability, agility, and lethality, he said. And, of course, it must also be affordable.

Furthermore, all FVL will need to be capable of being launched from a field environment without a runway, he said.

All categories of FVL will also be optionally manned, he emphasized. This means that even the FVLs that have a manned cockpit will be able to operate without the pilot — they can be remotely piloted. All must be able to team with other manned and unmanned aircraft.

Of great importance is that all FVLs will include modular open systems architectures, so that future component add-ons from any industry will be compatible.

Although there are four categories of FVL, none has greater priority over the others. All are top priorities, he said.

Currently, the FVL CFT team is receiving emerging need statements from deployed units regarding attributes needed in the FVL.

About the team
The FVL CFT team consists of experts from across the science and technology communities, requirements writers, program managers, testers, evaluators, contract writers, material experts, planners, programmers and budgeters, logisticians, maintainers and aviators from all components as well as from U.S. Army Special Operations Command — and even some coalition partners, he said.

To be on the team, every member must be flexible, agile, and innovative, he said.

“We don’t have the indulgence of more time,” he added, meaning that the team will compress the time it takes to move from requirements to fielding. “Speed will be our discriminating factor. It’s not just about speed of innovation, it’s about speed of delivering these capabilities to the force. We have to erase any advantage any potential adversary can have. It’s my highest priority.”

The goal of the CFT is to greatly reduce the delivery time of a standard program of record, anywhere from eight to 15 years, and to move quickly from requirements to the assembly line.

Maj. Gen. William K. Gayler, commander of U.S. Army Aviation Center of Excellence, said FVL is a capability, but not an end-all capability. The Army is doing much to prepare for the future.

“To get leap-ahead lethality, you must have a robust network, long-range precision fires, Soldier lethality, next-generation combat vehicles, and air and missile defense,” he said.

Even with the best outcomes in those six Army modernization priorities, Soldiers must still be trained to operate against peer threats in situations where satellites go down, cyber capabilities degrade, and precision instruments jam.