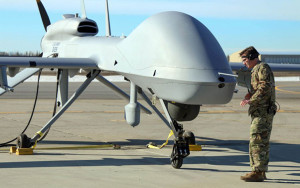 A Soldier with Delta Company, 25th Aviation Regiment inspects the airframe of an MQ-1C Gray Eagle at Fort Wainwright, Alaska.

Tate, director of Army Aviation, G-3/5/7, spoke April 27 during the 2018 Army Aviation Mission Solutions Summit in Nashville, Tenn. The event was sponsored by the Army Aviation Association of America.

Second, there is an urgent need for lighter-weight long-range precision munitions, he said.

Right now, for instance, a Gray Eagle UAS might loiter in the sky for more than a day, with several AGM-114 Hellfire, air-to-surface missiles on board, Tate said. Having detected a bad actor on a motorcycle or a group of terrorists warming around a campfire, the system could deploy one of its missiles.

A less expensive round that is also much lighter in weight, could take out those types of targets as well, he said. A Hellfire weighs over 100 pounds, so several times more lightweight rounds could be added to the rails of the UAS or AH-64 Apache helicopter.

Multiple vendors are currently competing on getting the Army the biggest bang for its buck on a number of these lightweight rounds, he said, noting that competition is good.

Aviation changes
Tate said discussion is underway to decide whether or not a rotational combat aviation brigade in Europe should be continued or if a permanent one should be stationed there.

Also under discussion is the possibility of adding two companies of CH-47 Chinook helicopters to the 101st Airborne Division, which currently has its 2nd Brigade Combat Team and its headquarters in Afghanistan.

Tate said the Chinooks are particularly helpful in moving supplies around the battlefield at night.

Royar, who has served in both Iraq and Afghanistan, added that he is also eyeing modernization efforts of Future Vertical Lift.

One of the capabilities he said he’s excited about in a FVL is increased power. During the summer months in Afghanistan, temperatures can become quite hot, he said. That, combined with the high mountainous terrain, limits the performance of aircraft due to the physics of decreased lift for those two variables.

That limits payload in terms of munitions, troops and supplies that can be carried, he said.

While every Army division has air-assault capability, Royar noted that the 101st specializes in air assault and has mastered the art of getting troops and supplies into combat areas with attack helicopter assets after reconnaissance helicopters have scoped the area. “We’ve done that successfully in both Iraq and Afghanistan,” he said.

The big transition for the 101st now, he said, is focusing on decisive-action training, something Royar said he did when he joined the Army in 1988, but “something we’ve gotten away from over the years.”

While part of the 101st is now in Afghanistan, most of it is at Fort Campbell doing home-station training focused on near-peer engagements, he said.