FORT IRWIN, Calif. – An array of straws, balloons, popsicle sticks, plastic cups and other sundry items greeted participants at the Fort Irwin Library’s Eggstravaganza egg drop competition April 18. The event, aimed at teens but open to all ages, challenged kids to use the materials to build an “egg armor” capable of protecting an uncooked egg from drops of approximately 3, 6 and 10 feet.

Participants had just one hour to design and complete their egg armor. The resulting contraptions ranged from a balloon raft meant to cushion the egg’s fall to a cup full of popsicle stick splinters designed to absorb the impact of the drop. The armors were judged in three categories: creativity, weight and survivability.

Jude Schmitt, 9, whose egg armor “Space Capsule Pickle” won first place in the survivability category, said the success of his design was the result of cushioning and trouble-shooting.

“I came up with cushioning and balloons on the inside,” he said. “We tried to take a balloon and wrap it around the egg, but it didn’t work out so we just put it on top. We wrapped a bunch of toilet paper around it for cushioning, too.”

Isabel Schmitt, 10, took a different approach. Her armor, which won a prize in the creativity category, utilized a mix of yarn and glue to protect the egg. She said at first she felt a lot of pressure because of the time constraints, but was encouraged by her armor’s early success.

“I’m not just proud of myself, I’m proud of all the other kids,” she said. “I thought all their other designs were pretty cool.”

While nearly all of the eggs eventually met an untimely end on the pavement, many of the improvised devices successfully protected their cargo through several drops. Kevin Clift, the library technician who organized the event, said the real goal was simply to get kids to innovate and think outside the box.

The idea for the egg drop competition came out of the library’s annual reading program last summer, which focused on topics related to Science, Technology, Engineering, Art and Math (STEAM). Clift said he and the rest of the library staff hope to bring more STEAM-related events to Fort Irwin in the future, and they are always open to ideas from the public. 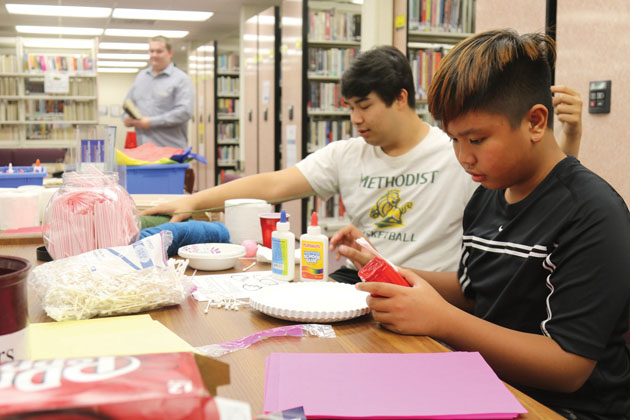 Brothers Michael and Anthony Hernandez worked as a team to build their egg armor at the Fort Irwin Library Eggstravaganza competition April 18. 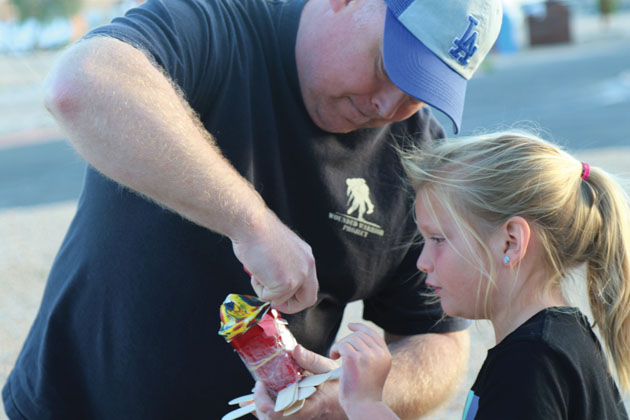 Addison Minnick, 7, and her dad, Tech. Sgt. Heath Minnick, check the condition of her egg after it survived a drop outside the Fort Irwin Library April 18.