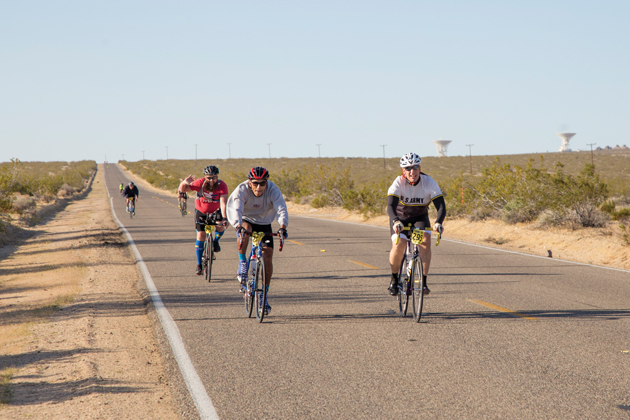 Contenders had a choice of three different races: a 2.5-mile route, a longer 10.5-mile trek, or the 41-mile full route. The 10.5-miler made the turnaround at the Goldstone access gate, while the 41-miler took cyclists to the Mars Satellite Station.

Outdoor Recreation Manager Edward Iden said he was pretty “stoked” this year because 30 participants signed up for the race.

As family’s and cyclists gathered for opening remarks and a quick safety briefing, Fort Irwin Garrison Commander Col. Seth Krummrich thanked participants for coming out. He noted that cycling was a 201-year-old tradition, and that the first bicycle, called a “Draisienne” was invented in Germany.

Garrison Command Sgt. Maj. Robert Edwards followed up by commenting that “the wind is blowing, but that makes it better.” Participants were also cautioned because the course was not a ‘closed course’, meaning riders would potentially have to share the road with motor vehicles or burros.

Mariah Bannon, an 11-year-old cyclist, took 1st place in the women’s 10.5 mile division. She said that the wind was difficult, but the hills were tougher. At one point she had to push her bike up one of the hills when she lost momentum, but was proud of herself for not stopping.

Women’s Masters winner Rai Simonson, who biked to the Mars station and back, said she was “beat”. Before the race, she worked her shift as a nurse at Weed Community Hospital and completed her shift at 2 a.m. Simonson was back up and ready to ride at 7 a.m.

Saturday’s race spanned most the morning, with the final rider coming into the finish at 11 a.m. Cyclists, volunteers, and families gathered and cheered until the last finisher came through. 1st, 2nd, and 3rd place medals were awarded for winners in each distance and division.

No more energy bills for Army housing, but requests to conserve continue