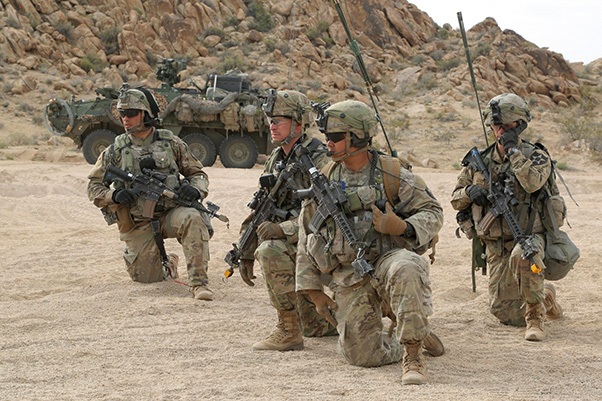 Since 1980, military personnel have come and gone through the National Training Center at Fort Irwin, Calif., to prepare for missions around the world.

These month-long rotations are usually geared to prepare a unit for an upcoming mission. For the 1-2 Stryker Brigade Combat Team, their April 2018 rotation to NTC was a way to prepare themselves against the future threats the country may face.

“When I went through Basic Officer Leaders Course, you were trained in a counterinsurgency environment,” said Capt. Bryan Nesbitt, an intelligence officer with 5th Battalion, 20th Infantry Regiment. “Now we train for a hybrid threat: fighting a near-peer adversary mixed with counter insurgency operations. The complexity of having both really changes the dynamics of the environment we train to operate in.”

During January through April 2017, the “Ghost Brigade” participated in Pacific Pathways, an operation in which units from the brigade were sent to multiple countries in the Pacific. There, the Soldiers worked and trained with their counterparts to build upon each nation’s capabilities and to work through interoperability challenges. Combined with the previous Yakima Training Center and Bayonet Focus training rotations, the experience has helped Soldiers and leaders become accustomed to working in different environments around the world.

“As a unit, we have been going to these exercises such as Bayonet Focus and others that have built up to this training event,” said Nesbitt. “This enhances our readiness. We get to try things out at Yakima Training Center then bring those systems to an austere environment such as NTC.”

These Soldiers are performing in a field environment with limited comforts of home, said Sgt. 1st Class Michael Shoop, who was the brigade battle noncommissioned officer-in-charge during the rotation. This training environment also gave the whole brigade the time to fine tune the way they work as a team, from the lowest echelon all the way up to the brigade staff.

These NTC rotations help prepare units for future conflicts by giving them situations they are not used to and cannot receive at home station, said Capt. Gary Grabruck, the electronic warfare officer for 1-2 Stryker Brigade Combat Team. All the enablers they are able to bring to the fight at NTC gave commanders and the Soldiers on the ground more to think about and incorporate into their readiness for future conflict.

“When you start getting injects from multiple systems from all across the battlefield, you have to put the people in the right place and trust they know what they are doing and they are comfortable doing it,” said Nesbitt. “Every single person has to be engaged. You are working non-stop for the entire time. You learn as an organization how to conduct the fight and how the staff fights, how your companies fight and the overall combat power you possess.”

Soldiers also have to re-think how they are going to operate in a near-peer fighting environment, Grabruck said. “People can have the mindset they can put our radios on high power and talk for as long as they can, but they forget a near-peer enemy can find them based of those radio transmissions,” he said. “That is why there is an emphasis on shorter radio bursts at lowest power necessary to communicate with the receiver.”

With this training, the brigade is setting the conditions now so the Soldiers, weapons and equipment are ready to go wherever they are needed, said Shoop.

“That’s why we come here to train and certify in this environment,” said Nesbitt. “We are confident in our abilities to execute the mission when called upon.”