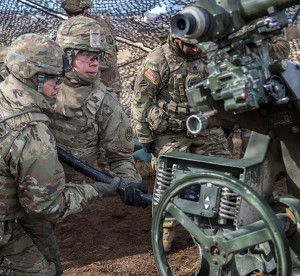 U.S. Army gunners from Archer Battery, 2nd Platoon, 4th Section, Field Artillery Squadron, 2nd Cavalry Regiment carry out a mission on the M777 howitzer. The 2nd Cavalry Regiment is providing feedback on prototypes, including mounted and dismounted electronic warfare capabilities they were fielded in February. Recently Electronic Warfare Officers from the 2CR came from Europe to participate in a simulation experiment in McLean, Va. to evaluate the operational value of the capabilities.

An adversary is spotted positioning fighters along the border of an ally nation. As U.S. Army forces are quickly deployed, one unit is under special instructions: detect and survey the adversary’s electronic warfare jammers and emitters.

As vital as this information is for the commander’s situational awareness, a few months ago mapping out the electromagnetic spectrum would have been much more difficult.

While only a simulated experiment, the realism of this scenario reflects how the Electronic Warfare Officers of the 2nd Cavalry Regiment must operate to ensure freedom of maneuver for ground forces. To help them do this, the Army recently rolled out its initial set of EW capabilities for brigade and below, giving Soldiers at the lowest echelons operating in a contested environment the ability to detect, identify and locate targets within the electromagnetic spectrum.

Now, just a few months after the 2nd Cavalry Regiment and other Europe-based units received the integrated package of mounted, dismounted, and command and control EW capabilities, a small group of EWOs traveled to the U.S. to see the next phase of upgrades, participate in simulated scenarios based on potential real-world missions, and provide feedback on how they would fight with the new systems. The simulation experiment, or SIMEX, helps the Army evaluate the operational value of the capabilities by determining whether the operators can accomplish the mission under the scenario-based exercise.

“Prior to this fielding, there was no equipment in the Army inventory to do what we’re doing today,” said Chief Warrant Officer 2 Michael Flory, an Electronic Warfare Technician for 2nd Cavalry Regiment. “The EW community was organized around that counterinsurgency fight, and you were essentially a staff advisor for other capabilities. Now we are capable of offering the commander not just information, but decisions for him to make and assets he can deploy and control himself.”

Delivered in response to an Operational Needs Statement from U.S. Army Europe, the technologies are interim solutions designed as a bridge to enduring EW programs of record that are still in development. The Army Rapid Capabilities Office and the Project Manager for Electronic Warfare & Cyber teamed with 2nd Cavalry Regiment and other receiving units on a rapid prototyping approach to shape system design, performance, functionality and training to meet operational needs in the near- and mid-term.

“This is the short-term [solution] until something more long-term comes along,” Flory said. “So it really helps to bridge that gap. It helps the commander see the electromagnetic spectrum that he’s responsible for fighting in.”

The 2nd Cavalry Regiment EWOs came from Europe to take part in a two week-long SIMEX, designed to help improve operational understanding and effectiveness of the EW prototypes. The event played out in a MITRE lab in McLean, Virginia, which accommodates over 50 personnel representing the operational roles of “blue” or friendly forces, and “red” or enemy forces. The SIMEX lab provides the appropriate computer infrastructure to conduct simulation experiments with real military Command, Control, Communications, Computers, Intelligence, Surveillance and Reconnaissance, or C4ISR, systems.

This experiment allowed the 2nd Cavalry Regiment EWOs to use their newly fielded capabilities in various operationally relevant scenarios in order to identify best tactics, techniques and procedures. The event brought together in one room the Soldiers who use the capabilities, the engineers who are designing them, the project manager responsible for fielding the program of record solution, and the RCO team delivering the interim prototypes.

“Development works out a lot better when you have direct user feedback,” said Capt. Kevin Voss, assistant product manager for Electronic Warfare Integration. “With the SIMEX, we can modify and tweak through constant feedback and constant interaction with the operators. We can map out what they need, based on how they use it in the field.” 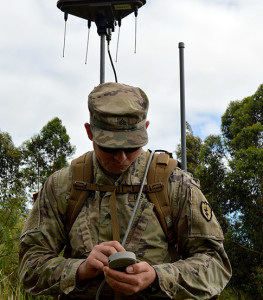 One scenario required the EWOs to detect communications between enemy forces’ headquarters and insurgents, then send an Unmanned Aerial Vehicle to confirm. Other scenarios involved detecting enemy jammers, networks and UAV communications; determining if a report that their network is being jammed is real or false; and intercepting, detecting, identifying and locating the source of interference that is affecting their communications.

By the end of the SIMEX, which concluded May 4, the Soldiers were becoming experts at utilizing their new kit of capabilities in order to command the electromagnetic spectrum.

“The SIMEX is not focused on the individual system,” said Nickee Abbott, who was one of the lead RCO engineers on the prototypes. “Instead, it’s about integration and operational understanding. It’s looking at the package of capabilities and how the Soldiers leverage that under realistic threat scenarios.”

With the engineers and operators working side by side, some of the suggested changes were made over lunch or by the next morning.

“This is a great way to give feedback,” said Staff Sergeant Justin Dugan, EW Non-Commissioned Officer for 2nd Cavalry Regiment. “It’s an opportunity to spend concentrated hours on the equipment in a simulated environment with the engineers that are developing it, [so we are] able to turn to the engineers or PM and say, ‘Why does it do that instead of this, or could it do this?’ And it’s incredible to see that information go straight from the operators’ thought process into the engineers’ thought process, and [they] immediately start working on it. ”

“Sometimes there is a disconnect [between] the engineer level and the user at the tactical level,” he said. “We’re trying to help illustrate where we live and fight, versus where they come to work. It’s showing them what is most valuable to us, and they’ve been incredibly receptive.”

The Soldiers also evaluated some new capabilities their fielded prototypes currently don’t have, in order to inform whether future iterations of the EW prototypes or programs of record should include added features, such as a sensor that provides a potentially wider and clearer image of the electromagnetic environment, and improved signal identification. Some software updates to the fielded systems are already on track to be delivered this summer, with additional “Phase 2” upgrades to the prototypes expected throughout 2018 and 2019.