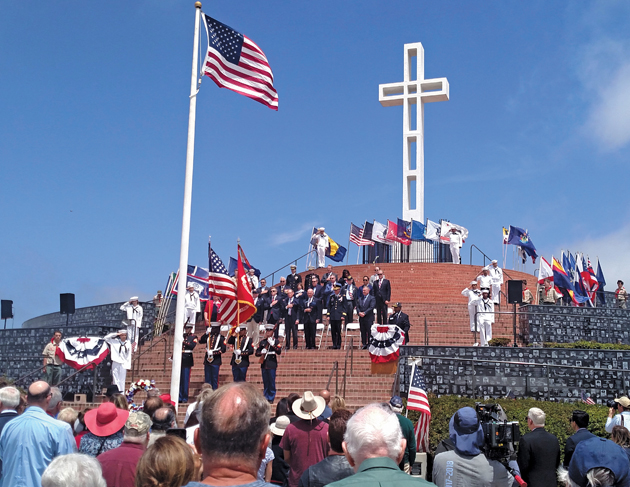 Monday May 28 marked the 150th anniversary of Memorial Day.

In honor of those Americans who have fallen in battle, leaders from the National Training Center and Fort Irwin attended memorial events throughout Southern California.

Brig. Gen. Jeff Broadwater, commanding general of the NTC was the keynote speaker at an event at Mount Soledad National Veterans Monument in San Diego.

Below is the text of his prepared remarks..

The American Civil War — fought bravely by soldiers in both Blue and Grey – was the original inspiration behind what we now know as Memorial Day.

The Civil War would be the most deadly war in American History. On both sides, over close to half a million American’s fell.

After the war, many communities, especially in the South, began to honor the fallen by decorating the grave sites of those who fell in battle.

According to “The Genesis of the Memorial Holiday in America” authors Daniel Bellware and Richard Gardiner state the origins of the organized Memorial Day Holiday can be traced to the Ladies Memorial Association of Columbus Georgia.

In 1866, the secretary of the association penned a letter that was widely published in newspapers in both the North and South.

In the letter she asked for the Press and Ladies throughout the South to “aid us in our effort to set apart a certain day to be observed from the Potomac to the Rio Grande and be handed down through time a religious custom of the country to wreathe the graves of our martyred dead with flowers.”

When the Ladies Memorial Association went to the cemetery to place decorations on the graves of the Confederate Soldiers buried there, they decided to honor the Union Soldiers also.

Many of the Union Soldiers buried in that cemetery had been under the command of General Grant at the battle of Shiloh when they were killed.

Three years after the war had ended, the head of the Grand Army of the Republic, an organization of Union Veterans, established Decoration Day as a time to honor Civil War Veterans by decorating their graves with flowers and wreaths.

According to an article in the New York Times in June eighteen sixty-eight, Logan had adapted the holiday from a plan “the ladies of the South had instituted.”

The first large observance of Memorial Day was held at Arlington National Cemetery in Virginia, with about five thousand in attendance.

The ceremony was held at the veranda of the Arlington mansion, once home to Robert E. Lee.

The event was hosted by Mrs. Julia Grant and her husband, Gen. Ulysses S. Grant.

And that is why we gather here today.

From Lexington Green to the Deserts of the Middle East – whenever freedom is threatened, gallant men and women of America risked, and too often gave their lives, in service to America. It’s what has always made America the beacon of hope and freedom that it is – the generations of brave and courageous warriors who dedicate themselves to the defense of the United States and that my friends, is why we have Memorial Day.

Their spirit lives on in the Soldiers, Sailors, Airmen and Marines who serve today.

I have the best job in the Army. As the commander of the National Training Center, I see every day the courage and commitment of today’s military service members. My charge is to make sure that they are ready to engage and defeat the enemies of the United States, wherever needed.

I can tell you that they are ready.

In closing, I’m reminded of the challenge then-President Ronald Reagan gave to all Americans on behalf of those we have lost, when he spoke at Arlington National Cemetery on Memorial Day, 1982. “Our first obligation to them and ourselves is plain enough,” he said. “The United States and the freedom for which it stands, the freedom for which they died, must endure and prosper.

Their lives remind us that freedom is not bought cheaply. It has a cost; it imposes a burden. And just as they whom we commemorate were willing to sacrifice, so too must we—in a less final, less heroic way—be willing to give of ourselves. “If words cannot repay the debt we owe these men, surely with our actions we must strive to keep faith with them and with the vision that led them to battle and to final sacrifice.”

I ask that each of us take up President Reagan’s challenge, and through our own actions, keep faith with all those who have fought our wars, by keeping their memory alive.

Thank you and God Bless the United States of America