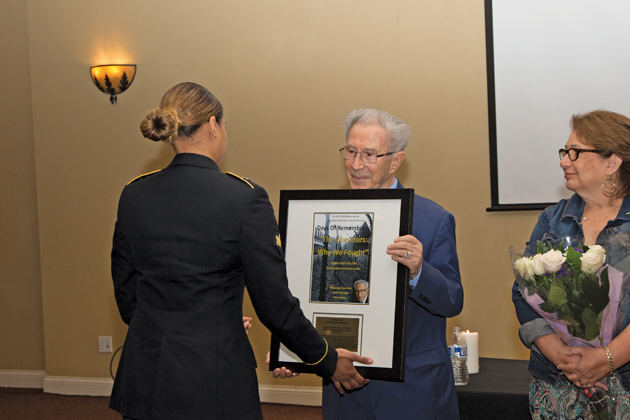 FORT IRWIN, Calif. — Fort Irwin held a Days of Remembrance ceremony April 25 to commemorate the victims and survivors of the Holocaust. Guest speaker Ben Lesser, a Holocaust survivor, was 10 years old when the Nazis came to Krakow, Poland, where he lived with his parents and four siblings.

“Life of course changed when the Nazis marched in. The whole world went upside down,” he said. “From that point on it was nothing but obeying orders, and if you didn’t obey an order exactly the way you were told, they simply shot you.”

Lesser’s family was forced to move out of the city, and eventually to a ghetto. He and his siblings fled to Hungary, but his parents were killed during the escape. Later, the surviving members of the family were loaded into cattle cars and sent to the Auschwitz concentration camp.

“It’s something that you can’t describe. Living 80 people in a cattle car, two buckets of water,” he said. “After the water was gone, there were no sanitary facilities, no toilets. Imagine, after the buckets filled up – one, two days – now on the third day all of this human waste was just flushing over. We were happy if we had bundles we could sit on top of, instead of sitting on the ground in the human waste.

“Children, babies, infants, pregnant women, older people – you can’t imagine the screams, the yells, what was going on.”

At the camp, Lesser was sent to work in a stone quarry. One day, three inmates escaped and he was one of the prisoners chosen for punishment. They were forced to stand on tiptoe and bend over a sawhorse without touching the wood, all while receiving 25 lashes. The three men ahead of him in line were unable to complete the task and were killed.

“All I can tell you is I psyched out and I said to myself, ‘Ben, this is it. If you want to live another hour, this is what you have to do,’” he said. He made it through all 25 lashes. “You could hear a pin drop in that camp. No one believed that anyone can make this.”

As Allied forces approached the camp in 1945, the Nazis forced Lesser and other prisoners on a death march to the Buchenwald concentration camp, and then transferred them by rail to the camp at Dachau. Dachau was liberated by American forces on April 29, 1945. Out of a family of seven, Lesser and his sister were the only survivors.

Col. Kelley Tomsett, commander of the Fort Irwin Dental Command, which hosted the event, thanked Lesser for speaking and underscored the importance of his message for future generations.

“There are coming generations that are forgetting that there was a Holocaust,” she said. “Remember the Holocaust, and remember to educate your children and their children so that this is something that isn’t repeated.”

In 2009, Lesser founded the Zachor Holocaust Remembrance Foundation in Las Vegas. The organization aims to raise awareness of the Holocaust and teach tolerance.