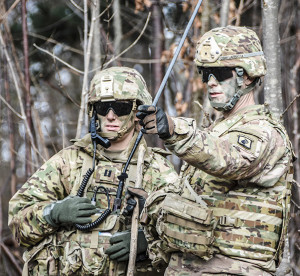 Capt. Beverly Nordin and Command Sgt. Maj. James LaFratta, the 173rd Airborne Brigade Support Battalion, make decisions about the employment of heavy machine guns as their paratroopers conduct a base defense live fire in Slovenia, 2017. U.S. Army researchers are currently working on a helmet prototype that will provide equal protection to earlier helmets but at less weight for Soldiers like Nordin and LaFratta.

Army researchers in Massachusetts are developing technology that may soon yield a lightweight combat helmet that provides more protection than anything ever fielded.

Representatives of the U.S. Army Natick Soldier Research, Development and Engineering Center, out of Natick, Massachusetts, had an array of combat helmets on display at the Pentagon, May 24 and 25, as part of a “Close Combat Lethality Tech Day.”

All three of those helmets make use of para-aramid fibers to protect Soldiers, and each successive helmet weighed less than its predecessor. The LW-ACH, for instance, is more than a half-pound lighter than the PASGT helmet for a size large.

Newer helmets on display made use of a different material: ultra-high-molecular-weight polyethylene, or UHMWPE.

The Advanced Combat Helmet Generation II, for example, weighs 22 percent less than the ACH and is designed to protect Soldiers from fragmentation as well as from rounds up to 9mm.

The Enhanced Combat Helmet, and the most-recently fielded Integrated Head Protection System with ballistic applique, provide protection against rifle fire as well. That increased protection, however, comes at a cost in terms of weight.

The helmet display made clear the challenge posed to those responsible for designing gear that keeps Solders safe.

“There’s kind of a competition between increased threat and weight,” said Richard Green, the director of the Soldier Protection and Survivability Directorate at NSRDEC. “We want to protect against increased threat, while minimizing the weight. That’s our goal.”

The centerpiece of the NSRDEC helmet display, the NSRDEC prototype helmet, met the protection versus weight challenge head on.

Weighing in at just 2.5 pounds for the shell, and an estimated 3.5 pounds final weight, the NSRDEC prototype provides the same protection as the currently-fielded IHPS.

But the NSRDEC prototype doesn’t require the modular IHPS ballistic applique that attaches over the base helmet. With that applique in place, the IHPS system weighs over five pounds. The NSRDEC prototype weighs less than half that and provides the same protection. It protects Soldiers against fragmentation, against 9mm weapons fire, and against what Green called a “prevalent rifle threat.” 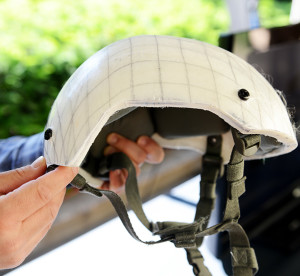 Representatives of the U.S. Army Natick Soldier Research, Development and Engineering Center, out of Natick, Massachusetts, had an array of combat helmets on display at the Pentagon, May 24 and 25, as part of a “Close Combat Lethality Tech Day.” This helmet, a NSRDEC prototype, provides equal protection to earlier helmets but at less weight.

The NSRDEC prototype helmet is made of the same class of material as the IHPS, the ECH and the ACH GEN II: UHMWPE. But what researchers at NSRDEC have done is developed new ways to process UHMWPE so that it will be stronger than it has been in the past.
“It’s stronger, so you need less of it,” Green said.

The new processing methods NSRDEC researchers have developed for UHMWPE has improved the ballistic performance for that material within a helmet. That means Soldiers may one day see a finished helmet that weighs the same as the ECH, but provides more protection.

“The processing of that material has enabled us to optimize its performance,” said Kenneth Ryan, the Warfighter Protection Branch chief at NSRDEC. “Decreasing the load helps optimize Soldier performance, and that helps them to be more lethal.”

The NSRDEC doesn’t manufacture helmets for the Army. Instead, it is the defense industry that ultimately provides that function, Ryan said. But when the time comes, it’ll be research done at NSRDEC that industry uses to make the next generation of helmets that will help keep Soldiers safe on the battlefield.

Ryan said he expects it will be about 12 months before these advanced technology developments that yielded the current incarnation of the NSRDEC prototype helmet can move forward to a point where the Army may request industry to develop mass-produced helmets for fielding to Soldiers.