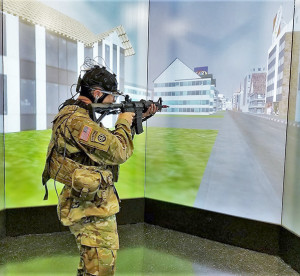 A volunteer from the 82nd Airborne Division wears a neurostimulation and brain-monitoring device while clearing an urban scene of enemy combatants in a virtual-reality cave at the Center for Applied Brain and Cognitive Sciences, Tufts University, Medford, Mass.

Can the Army produce faster, stronger and smarter Soldiers through electrical stimulation of the brain?

Neurostimulation is not actually a process the Army intends to use for creating “super Soldiers.” However, Army researchers have been experimenting with it as a means to accelerate training.

“We’ve seen a lot of positive effects of neurostimulation in our lab,” said Dr. Tad Brunye, senior cognitive scientist at the Natick Soldier Research, Development and Engineering Center, known as NSRDEC, in Natick, Mass. He heads up neurostimulation research there along with Dr. Erika Hussey.

Brunye and members of his staff were in the Pentagon courtyard May 23-24 during a Close Combat Lethality Tech Day.

Brunye has been experimenting with neurostimulation at Natick over the past four years and at the nearby Center for Applied Brain and Cognitive Sciences in Medford, Massachusetts. The center was created in 2015 through a partnership between the Army and the School of Engineering at Tufts University. It is co-directed by NSRDEC’s Cognitive Science and Applications Team along with Tufts faculty.

Volunteers at the center receive low-intensity electrical current through headphone-style stimulation systems or electrodes mounted on what looks like a bathing cap. Then their performance in the virtual-reality environment is measured. Neurostimulation has shown the following benefits:

* Increased ability to recognize suspected terrorists from a list of faces studied hours earlier during neurostimulation.
* Improved navigation performance, especially for individuals with lower spatial abilities. Soldiers in large-scale virtual urban environments did better moving between objectives during neurostimulation.
* Increased attention span. Attention might wane after 20 minutes when watching a security monitor and neurostimulation could increase that attention span to 20 hours.
* Enhanced motor skills, such as the standing broad jump, when a particular area of the brain is stimulated during practice.

“We want to make sure that we stimulate the right areas of the brain, at the right time, in the right individual, in a manner targeted to specific tasks that we need them to excel on,” Brunye said.

“The consumer market is exploding with do-it-yourself brain stimulation devices right now, and Soldiers are willing to try just about anything to enhance their mental and physical performance,” Brunye continued. “But we need to be sure that any commercial claims are supported by rigorous experimental science, and that the systems are being used only in appropriate and beneficial ways. Our science and technology efforts are helping ensure that is the case.” 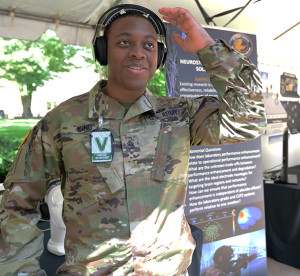 Staff Sgt. Christian King-Lincoln tries on a headset that is providing neurostimulation from a wireless transmitter behind him. The stimulation is not going through his ear pads, but instead through an array of small flexible inducers along the adjustable headband. King-Lincoln is the Human Research Platoon sergeant at Natick, Massachusetts, and he accompanied scientists to the Pentagon for Close Combat Lethality Tech Day, May 23-24, 2018.

Creating high performers
Soldiers from a variety of military occupational specialties volunteer to come to Natick immediately following their initial-entry training, Brunye said. They serve about three months at Natick before moving on to their first unit. These Soldiers are used in the experiments, along with volunteers from local communities around Boston.

The volunteers feel just a tingling, itchy sensation on their scalp during the neurostimulation, he said.

“In terms of long-term impact, there are no known negative or adverse effects of neurostimulation,” he said.

Neurostimulation will help accelerate learning and can bring Soldiers up to a level of high performance quickly. “It will compensate for some of the variability we see” during learning, Brunye said.

The effects of neurostimulation, however, are less noticeable on those who are already high performers on a specific task, he said. In fact, neurostimulation can sometimes have a slightly detrimental effect on high performers. Those individuals already have a fine-tuned system for completing a task and neurostimulation will help them wire a new neuron highway for that task — one that may not be initially as effective, he explained.

Innovative partnership
The Army signed a five-year cooperative agreement with the Tufts School of Engineering almost four years ago and established the Center for Applied Brain and Cognitive Sciences.

“It’s a very unique reciprocal relationship we have with the university,” Brunye said.

The university provided the physical facility and infrastructure, such as the heating and cooling systems, networking, and computer hardware and software. Tufts also provided personnel for manning the facility and post-doctoral researchers to help run it.

About half of the participants in experiments at the center are Soldiers, Brunye said. 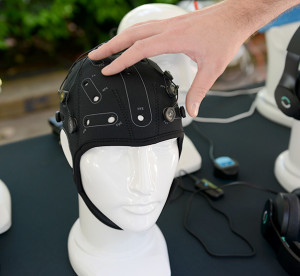 Dr. Aaron Gardony, cognitive scientist at the Natick Soldier Research, Development and Engineering Center, points out the type of headset that is normally used for neurostimulation research. The cap consists of electrodes that can stimulate specific parts of the brain to enhance concentration or performance. The cap and other neurostimulation devices were on display in the Pentagon courtyard for Close Combat Lethality Tech Day, May 23-24, 2018.

The neurostimulation is provided via a wireless device. Much was learned from experiments that involved searching and clearing buildings over the last five months, he said. In these experiments, neurostimulation began about five minutes before a task and continued through the task, Brunye said.

The voltage varied from 7 to 18 volts, at very low amperage (usually between 1 and 2 milliamps). Direct current is the norm, but the lab is beginning to use alternating current to target more specific areas of the brain, he said.

Recently, Special Operations Command and the Defense Innovation Unit Experimental, or DIUx, have been experimenting with neurostimulation. They have been especially interested in developing motor skills and new procedures with weapons systems, Brunye said.

In addition to coordinating with RDECOM, the Natick team works closely with the Army’s Training and Doctrine Command on neurostimulation to enhance training, Brunye said. They also work closely with the Air Force Research Laboratory and have partnered with them on a NATO exploratory team examining several techniques for cognitive neuroenhancement.