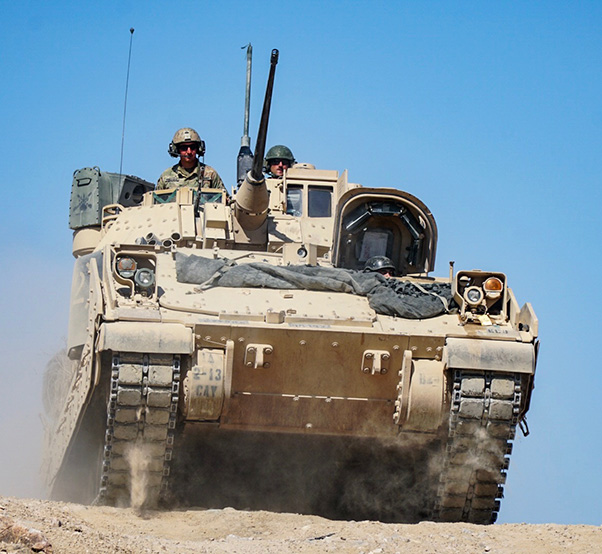 “The National Training Center is the culminating event that incorporates all of the training during Bulldog and Iron Focus,” said Col. Robert E. Lee Magee, commander of 3 ABCT, 1 AD.

Bulldog Focus and Iron Focus, successive qualification exercises at home station, were the first two steps in a gated training plan that led up to the NTC rotation that began in May.

“Our Soldiers have done outstanding in every event we threw at them, and I know they’ll be successful as we continue to put them to the test during NTC and other future missions,” added Magee.

The Bulldogs’ experience during the NTC rotation enabled the commander to focus leadership, training, and resources on improving the brigade’s combat readiness to meet future contingency requirements.

“The difference in fighting in NTC from our training area at Fort Bliss is that we can’t run back to our headquarters and pick up the skills, personnel or items that we forgot or need,” said Magee. “Here, we’re actually fighting against our comfort zone and training towards being a sustaining force regardless of where the Army sends us.” 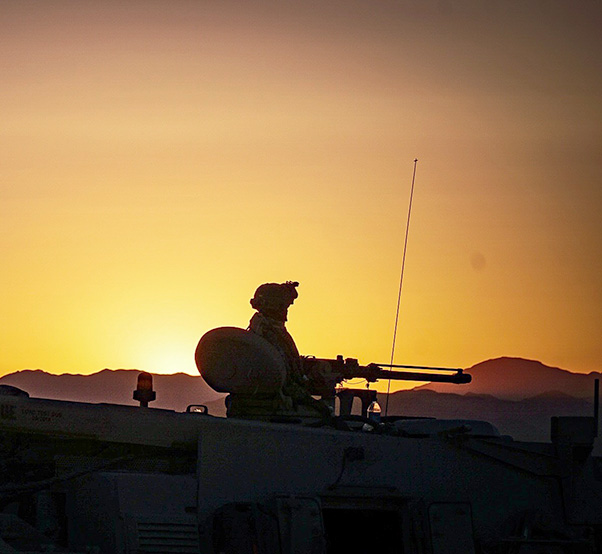 A Soldier assigned to 3rd Armored Brigade Combat Team, 1st Armored Division conducts security operations while in Fort Irwin, Calif., for National Training Center rotation 18-08, which began May 27 and lasted three weeks. NTC tests Soldiers and prepares them for real-life situations they may face in combat.

The NTC replicates the tough, realistic operational environment that the brigade could face in combat. This extends beyond simply fighting an enemy force.

“NTC does not only train Soldiers for a firefight, but has many role players that act as key leaders, local civilians, refugees, and any other real-life role in a sovereign state,” explained Maj. Patrick Benitez, commander of the 416th Civil Affairs Battalion from San Diego, California, an enabling unit that joined 3 ABCT for the training rotation.

“It’s not hard to picture that we’re in Atropia,” said Magee. “NTC has made it so that everywhere we go, everyone we interact with, and every mission we conduct has the realism that we are in another country.”

In addition to fighting an enemy, the Bulldogs had to mitigate situations such as local civilian protests and host nation humanitarian issues.
The training exercise showed the brigade that there are long-lasting effects for every action they took.

“There are people in the area who are affected by our presence,” said Benitez. “We must show them or learn to show that we are here to support them during and after conflict.” 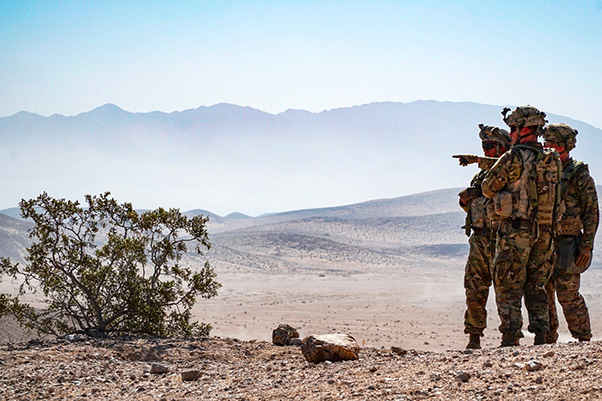 In “the box,” the training area where the brigade fought simulated force-on-force battles with NTC’s opposition forces, the Bulldogs tested their lethality using a complex system of lasers and sensors called the Multiple Integrated Laser Engagement System, or MILES. The MILES gear replicated firing weapons and taking damage and casualties. The equipment was attached to every person, weapon system, and vehicle to track 3 ABCT’s effectiveness in the fight.

“When someone or a vehicle is hit, we actually have to count them as a loss towards our future missions,” said Magee. “This makes us plan more effectively while utilizing all of our resources more efficiently. This is important because it gives us real life statistics without actually putting our force in immediate danger. This is the ultimate way to train, to fight, to win.”

“NTC is about measuring the brigade’s ability to destroy the enemy, assess that ability, and improve it to make it more lethal,” he said. 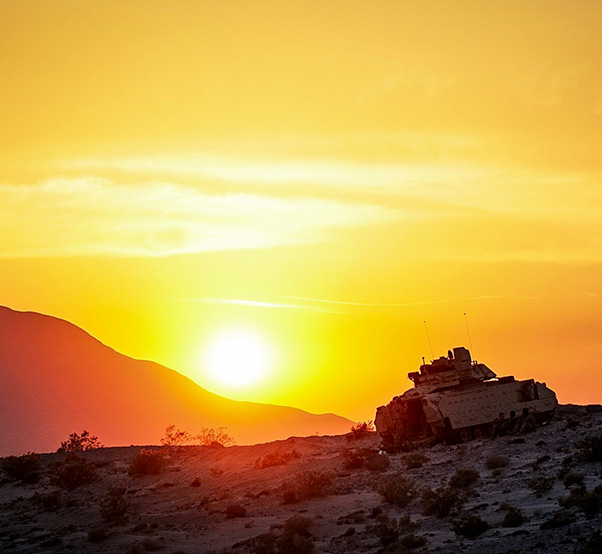 A Bradley Fighting Vehicle climbs the side of Mount Tiefort Mountain in Fort Irwin, Calif., at sunset in preparation for a training mission during rotation 18-08 the National Training Center May 27-June 17, 2018.

Throughout the training rotation, 3 ABCT exercised not only the combat arms skills of the brigade, but also incorporated enabler units from special operations, civil affairs, psychological operations, cyber operations, and chemical, biological, radiological, and nuclear operations to strengthen the brigade’s ability to fight across multiple domains.

“All of these domains are necessary to fight in the world today,” said Magee. “The world is growing and changing, and we, as an Army, must grow and change to be capable in protecting the American population regardless of the threat.”

NTC is America’s platform for brigade combat teams to continue to develop where they shine, as well as learn where they can grow.

“The training was based on high-intensity conflict for a peer-to-peer fight,” said Capt. Travis Edwards, assistant operations officer with 3 ABCT, 1 AD. “We have much that we need to improve on because the Army has not been fighting this way for the last 15 or 16 years. It isn’t our current fight, but it may be our next fight.”

Conducting the NTC rotation made sure 3 ABCT has lethal battalions that can shoot, move and communicate on the modern battlefield and will be highly trained and ready when the nation calls. 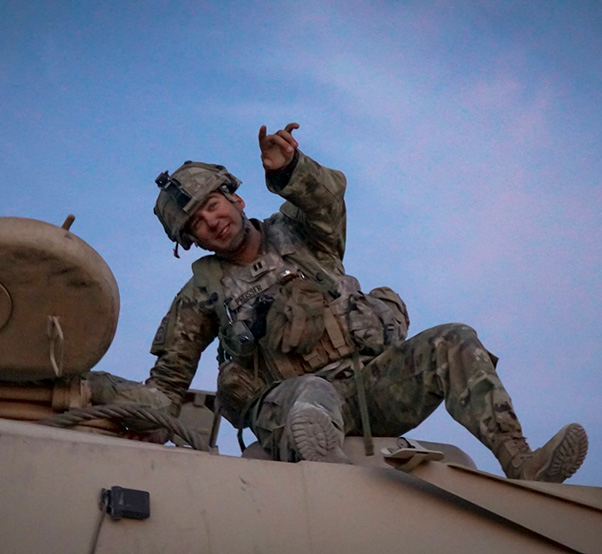 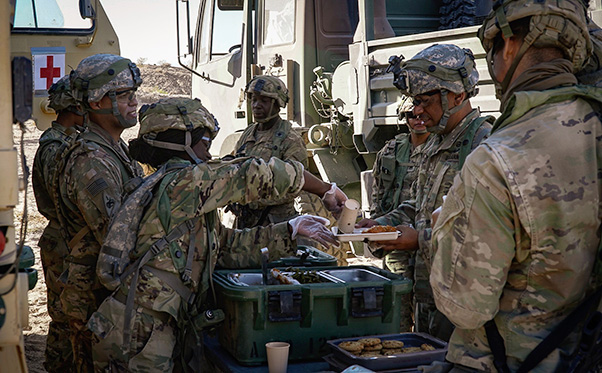 Soldiers with 3rd Armored Brigade Combat Team, 1st Armored Division serve a hot meal in the field for dinner during rotation 18-08 at the National Training Center in Fort Irwin, Calif. May 27-June 17, 2018. 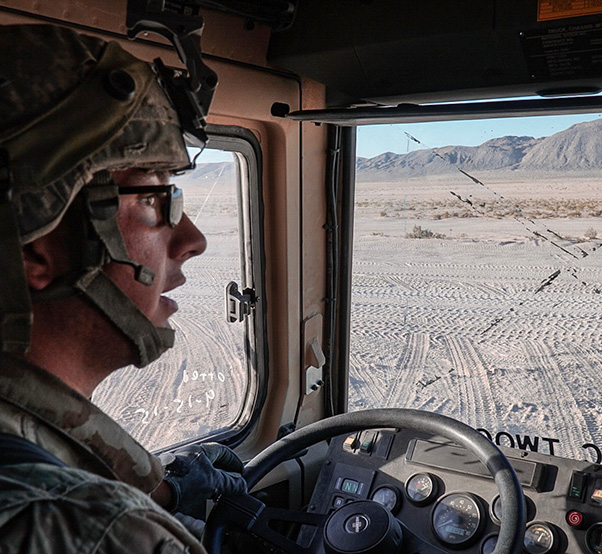