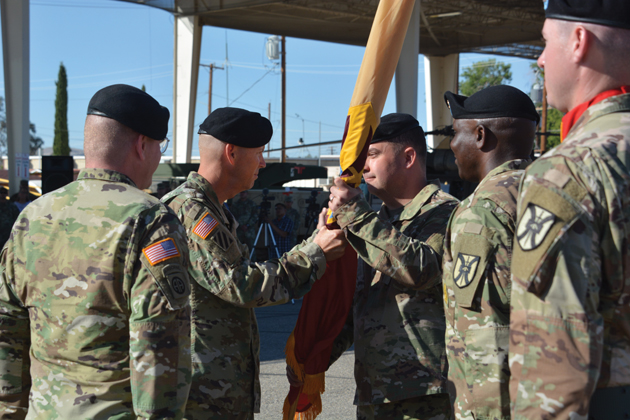 Brig. Gen. Jeff Broadwater, commander of the National Training Center, presided over the ceremony. He said that with the high tempo and demanding environment here, all to sustain diverse brigade combat teams, Melton was the right leader to command the 916th Support Brigade

“The Army picked the right leader (Melton) for the tough job of building and sustaining readiness,” said Broadwater “Faced with the challenge of replicating an expeditionary sustainment command, which is a vastly larger organization in terms of personnel and equipment, each challenge was met with determination and commitment to the mission.”

The 916th Support Brigade provides missions command, synchronization, integration and logistic support as rotating units arrive in a replicated immature theater at the National Training Center. The brigade represents the sustainment arm and aviation support to more than 50,000 service members who rotate through the NTC on a yearly basis.

For his next assignment, Melton will serve at Fort Knox, Kentucky, as Chief of Staff for the 1st Theater Sustainment Command. During the ceremony, he thanked the 916th Support Brigade Soldiers and command team for their faith and confidence in his leadership.

“What this brigade does is all inspiring, we can’t say thank you enough for allowing us to be in your formation,” said Melton “We are going away with some of the best friendships that I think I’ve ever developed in my whole military career.”

During Bradford’s remarks, the incoming commander said he was not only excited about the location of his new assignment, but also to command of such a dynamic unit with the important mission of building and sustaining Army readiness.

“I think of today as a transition of leadership in the midst of an enduring mission of the Army, we will never leave a unit without the support and training they need to execute their mission at the Army’s premier training facility.”

Upon graduating from the National War College, Bradford became an assistant professor at the Dwight D. Eisenhower School of National Security, where he taught Defense Strategy and Resourcing and an Industry Study on Biotechnology.