FORT IRWIN, Calif. —The 11th Armored Calvary Regiment recently granted the wish of Ethan Larimer, a boy with a rare disease who wants to follow in his father’s footsteps and become a Blackhorse Trooper. With the help of the 1916th Support Brigade, the 11th ACR and Carla Averill, a family friend, Ethan’s dream was made into reality at Fort Irwin on May 31, 2018.

Ethan has a medical condition called Charcot-Marie-Tooth neuropathy type 4J (CMT4J). This disease has made him wheelchair bound and delayed his ability to develop crucial motor skills.

“Ethan has dealt with his disease very well,” said Daniel Larimer, Ethan’s father and a former Blackhorse Trooper. “He has been hospitalized for weeks on end at times, as well as continuous physical therapy. One thing Ethan has taught me is that even if you have some barriers or limitations, that doesn’t need to be your life.”

Though Ethan will never be able to serve in the Army due to his disability, he still dreams of riding into battle on the back of tanks. The famed Blackhorse Regiment was happy to oblige.

“Through his diagnosis and living with CM4JT, Ethan has shown great resiliency,” said Col. Joseph Clark, Regiment commander, 11th ACR. “My interaction with Ethan was inspiring, because he maintains positivity, and refuses to allow his disability to stop him. Throughout the day, he was curious and asked many questions about what we do. His personality, his drive, and his grit is exactly what I look for in my Troopers, and I am honored to have made him a Blackhorse Trooper.”

Ethan had a wish list for his visit, said Averill. He wanted to see a gun, drive his wheel chair into a tank, and see a helicopter. The 1916th supplied a UH-72 Lakota and 11th ACR supplied a Main Battle Tank, OPFOR Surrogate Vehicle. The regiment also demonstrated the use of a M240B Machine Gun, Browning M2 .50 Cal. Machine Gun, M249 Squad Automatic Weapon and M4A1 Carbine.

After completing Ethan’s wish list, the Blackhorse Regiment pulled all the stops to ensure his experience he would never forget, said Averill.

Ethan was given a personal “Box Tour”, an event where people are shown the ins and outs of training and battles at the NTC. Later, Ethan was shown a demonstration of a battle in Razish, a constructed town in the NTC’s training area. He then led a platoon during building clearance drills through the streets of Razish.

After leaving the Box, the 11th ACR’s Horse Detachment gave Ethan a tour of their stables and brought some of the horses out to greet the young Trooper. The Horse Detachment conducted a special demonstration for Ethan and his family to mark the end of Ethan’s day in the life of a Blackhorse Trooper.

“Even though I am no longer a service member, the post and the unit I was a part of really pulled out all the stops to accommodate my son,” said Daniel. “We are all really grateful to come back and see what the Blackhorse has become and to hear ‘Allons’ again.” 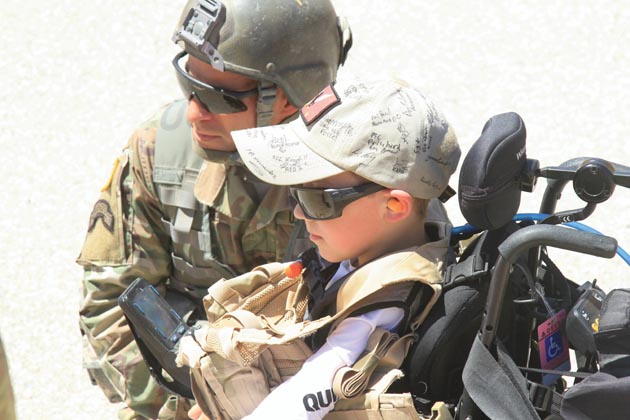 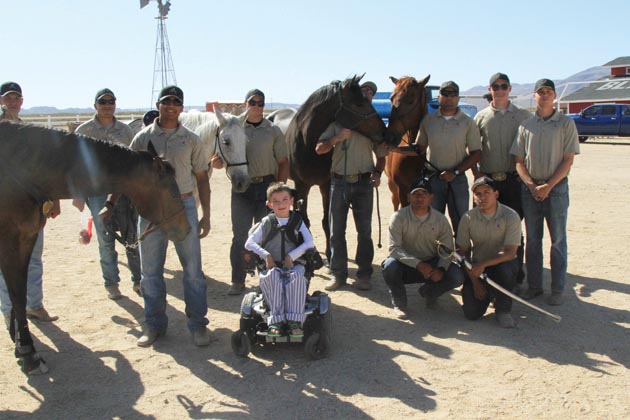