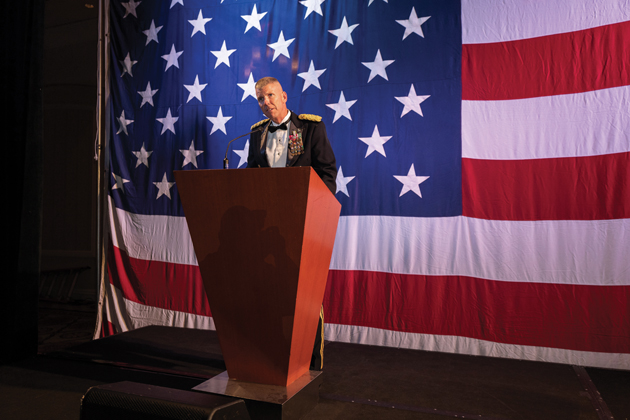 In his prepared remarks, Broadwater reflected on the service and sacrifice of the Americans who have stood watch over the Nation since the beginning of the Revolutionary War.

“Today we pause to honor our soldiers, civilians and Army families … who, time and again, have guarded and secured our freedom,” Broadwater stated. “From the Revolutionary War to today, they have shown that when it comes to our nation’s freedom and liberty, they embody the Army’s motto, This We’ll Defend,” he said.

Along with the celebration of the U.S. Army, Broadwater also spoke about the 100th anniversary of the end of World War I.

Of the over 2 million American Soldiers and Marines that served “over there,” 112,000 called California home. Much of the California National Guard’s 40th Infantry would train at Camp Kearney near San Diego, before leaving for combat in France.

He also spoke of the California Guard Soldiers who would fill out the ranks of the 91st Division, know as the “Wild West” division. The 91st would distinguish themselves in the Meuse- Argonne Offensive by capturing several strategic targets.

He concluded his remarks by asking the gathering to remember all the Soldiers who have served in the long history of the U.S. Army.

“Throughout our 243-year history, each has served with distinction and honor throughout in the cause of freedom,” Broadwater said. “They have not only defended our way-of-life in foreign lands, but have stood guard here at home, and combatted devastation from natural disasters, rushing to the aid of Americans in need and keeping us safe and secure at home.”

“They are the guardians of our freedom … beacons of hope and liberty; and while never asked to be called anything other than ‘soldier’ or ‘civilian’, to us … they are all heroes.”