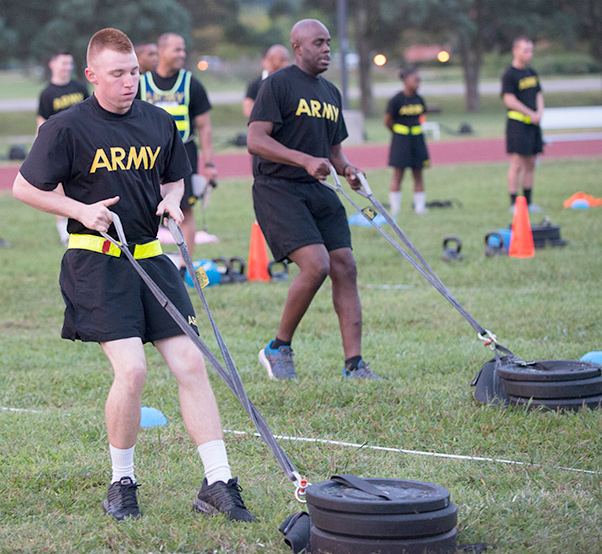 Pfc. Alex Colliver, foreground, pulls a 90-pound sled 50 meters that simulates the strength needed in pulling a battle buddy out of harm’s way during a pilot for the Army Combat Fitness Test, a six-event assessment designed to reduce injuries and replace the current Army Physical Fitness Test.

The six-event readiness assessment, called the Army Combat Fitness Test, is intended to replace the current three-event Army Physical Fitness Test, which has been around since 1980.

Beginning October 2020, all Soldiers will be required to take the new gender- and age-neutral test. Before that, field testing set to begin this October will allow the Army to refine the test, with initial plans for up to 40,000 Soldiers from all three components to see it.

“The Army Combat Fitness Test will ignite a generational, cultural change in Army fitness and become a cornerstone of individual Soldier combat readiness,” said Maj. Gen. Malcolm Frost, commander of the Army’s Center of Initial Military Training. “It will reduce attrition and it will reduce musculoskeletal injuries and actually save, in the long run, the Army a heck of a lot of money.”

At least six years of significant research went into the test’s development as researchers looked at what Soldiers must do fitness-wise for combat. 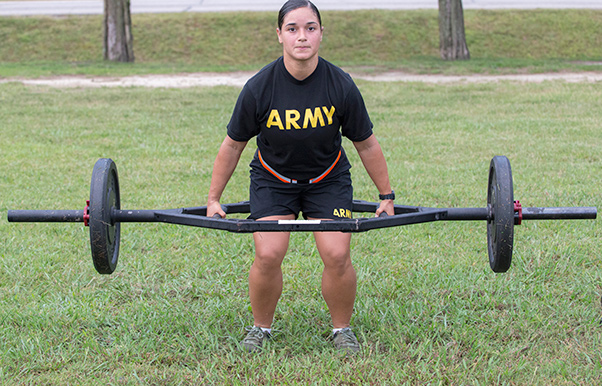 “Throughout that research and testing, the goal was to provide our leaders with a tough, realistic, field-expedient assessment of the physical component of their Soldiers’ individual readiness,” said Sgt. Maj. of the Army Daniel A. Dailey. “The ACFT is scientifically-validated and will help better prepare our Soldiers to deploy, fight, and win on any future battlefield.” 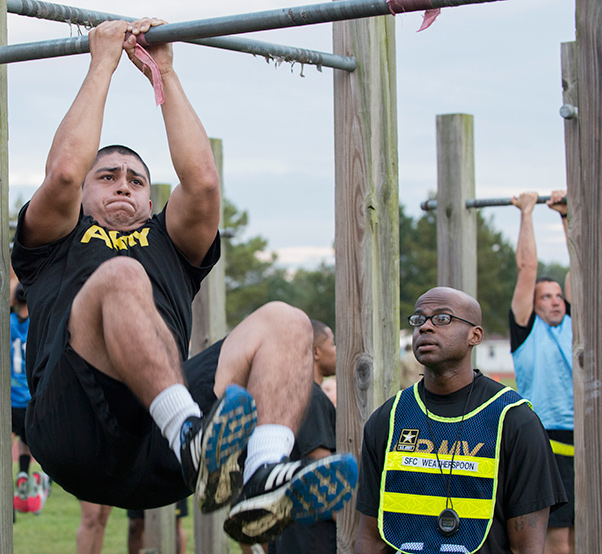 Six events
While the ACFT still keeps the 2-mile run as its final event, it introduces five others to provide a broad measurement of a Soldier’s physical fitness. The events are completed in order and can take anywhere from 45 to 55 minutes for a Soldier to finish.

* Strength deadlift: With a proposed weight range of 120 to 420 pounds, the deadlift event is similar to the one found in the Occupational Physical Assessment Test, or OPAT, which is given to new recruits to assess lower-body strength before they are placed into a best-fit career field. The ACFT will require Soldiers to perform a three-repetition maximum deadlift (only one in OPAT) and the weights will be increased. The event replicates picking up ammunition boxes, a wounded battle buddy, supplies or other heavy equipment.

* Standing power throw: Soldiers toss a 10-pound ball backward as far as possible to test muscular explosive power that may be needed to lift themselves or a fellow Solider up over an obstacle or to move rapidly across uneven terrain.

* Hand-release pushups: In this event, Soldiers start in the prone position and do a traditional pushup, but when at the down position they release their hands and arms from contact with the ground and then reset to do another pushup. This allows for additional upper body muscles to be exercised.

* Sprint/drag/carry: As they dash 25 meters five times up and down a lane, Soldiers will perform sprints, drag a sled weighing 90 pounds, and then hand-carry two 40-pound kettlebell weights. This can simulate pulling a battle buddy out of harm’s way, moving quickly to take cover, or carrying ammunition to a fighting position or vehicle.

* Leg tuck: Similar to a pullup, Soldiers lift their legs up and down to touch their knees/thighs to their elbows as many times as they can. This exercise strengthens the core muscles since it doubles the amount of force required compared to a traditional situp.

* Two-mile run: Same event as on the current test. In the ACFT, run scores are expected to be a bit slower due to all of the other strenuous activity. 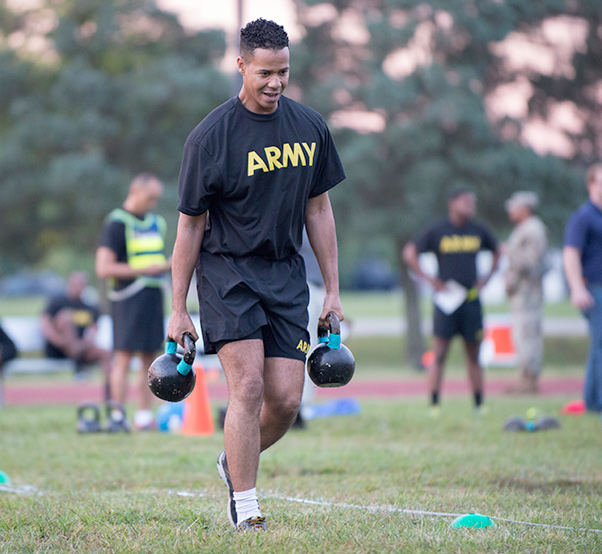 Test scoring
The vast majority of policies with the APFT will likely be carried over to the new test.

Scoring could be similar with 100 points for each event for a maximum of 600. Minimum scores, however, may change depending on a Soldier’s military occupational specialty. Soldiers in more physically demanding jobs may see tougher minimums, similar to how OPAT evaluates new recruits.

“The more physically challenging your MOS, the more you’ll be required to do at the minimum levels,” said Michael McGurk, director of research and analysis at CIMT.

Another difference is that there are no alternate events planned for this test, he said.

Soldiers will still get adequate time to rehabilitate from an injury. But under a new “deploy-or-be-removed” policy, Defense Secretary James Mattis said in February that troops who are non-deployable for more than 12 months will be processed for administrative separation or referred to the disability evaluation system. 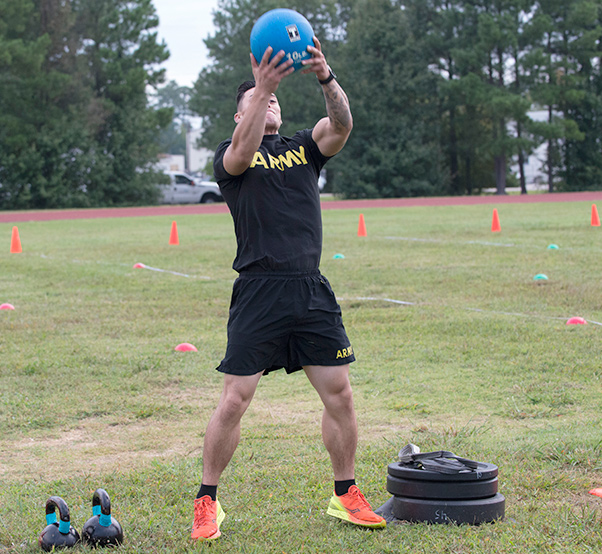 “Generally speaking, somebody who has a long-term permanent profile that precludes taking a fitness test may not be retainable for duty in the Army,” McGurk said.

At about $20 million, the new test will be more costly for the Army to conduct. A single lane of equipment at full retail value is about $1,200. A battalion set of equipment will range from $12,000 to $20,000. Those prices will likely drop as the Army buys more sets at wholesale.

Equipment should last about 10 years, meaning it will cost less than $3 per Soldier over time.

“If I have a femoral neck fracture in the hip of a Soldier, that injury will cost the government about $1 million,” McGurk said. “So, if I avoid 20 of those injuries a year I’ve paid for the program for the next 10 years for equipment. The potentials on return are very significant.”

Cost avoidance
The Army estimates $4 billion is spent each year due to injuries, non-deployable Soldiers, accidents and other health-related costs.

As part of its culture change, the Army is building a Holistic Health and Fitness System to produce healthier and fitter Soldiers. The new test is one piece of the system, in addition to the OPAT, the improvement of fitness centers, and healthier options at chow halls.

Army researchers studied foreign militaries that have rolled out similar holistic programs and found them to be highly successful.

The Australian army, for instance, introduced it to their basic training and saw a roughly 30 percent reduction in injuries.

“Do I know we’re going to have a 25-30 percent reduction? No, but I certainly hope we will,” McGurk said. “We think [the test is] well worth it and it’s the right thing to do for Soldiers in any case.”

Feedback from Soldiers so far has also been overwhelmingly positive. 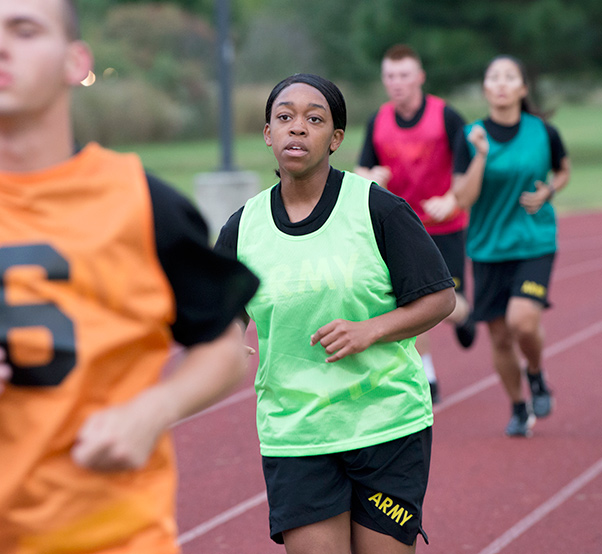 Soldiers conduct a two-mile run as part of a pilot for the Army Combat Fitness Test, a six-event assessment designed to reduce injuries and replace the current Army Physical Fitness Test.

“As we all know, physical fitness training can become rather monotonous if people train the same way,” McGurk said. “So, a lot of them saw this as a great change and how it required them to use different muscles.”

While some Soldiers may disagree with replacing the current test, McGurk said that fitness has come a long way from 40 years ago when the APFT was first developed.

“In 1980, running shoes were relatively a new invention,” he said. “The Army was still running in boots for the PT test back then. Change is difficult, but we’re an Army that adapts well to change.”

Army vision
In early June, senior leaders outlined what the Army should focus on over the next decade to retain overmatch against potential adversaries.

The 2028 vision statement, signed by the Army’s secretary and chief of staff, calls for modernized equipment, particularly the development of autonomous systems. It also stresses the need for physically fit and mentally tough Soldiers to fight and win in high-intensity conflict.

“Technology is going to be dominant and we need a lot of things that we’re looking at through modernization,” Frost said. “In the end, you still need the United States Army Soldier to be able to seize and hold terrain.”

The ACFT is a foundational method, leaders believe, that the Army can use to start a new era of fitness and obtain Soldier overmatch in combat.

“The current leadership … has really coalesced and understands the importance of fitness itself and the importance of the PT test to drive that change in culture,” Frost said. “They’ve made the decision and we’re ready to execute.”