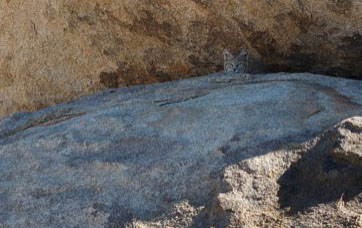 Fort Irwin is home to a variety of wildlife ranging from the overly abundant common raven, to the elusive bobcat. The bobcat (Lynx rufus) is a species of cat found throughout North America, from parts of Mexico to southern Canada making it the most widespread wild cat in North America. With such an extensive range, they are adapted to life in a wide array of environments including swamps, forests, deserts, urban areas, and are a known resident of Fort Irwin. Bobcats are grey to reddish-brown and have a wide flat face with longer fur on the cheeks. They are about two times the size of a house cat, generally weighing 15-20 lbs. Often confused with mountain lions or mountain lion cubs, bobcats are easily distinguishable by their short “bobbed” tail, from which they get their name.

Bobcats are carnivorous generalists, meaning their diet is made up of many types of prey animals. They primarily prefer to eat small mammals, rodents, birds, and lizards. As a top predator in the Mojave, bobcats play a critical role in keeping the ecosystem balanced and healthy. These important predators are nocturnal which means most of their activity is limited to the night time and twilight hours. When not active, bobcats prefer covered shelter and can be found in rocky caves, under dense brush, hollowed logs, or on low hanging tree branches. Bobcats rarely stay at the same shelter site for more than one day at a time.

Bobcats are shy, solitary creatures and prefer to avoid humans. However, human development can alter the environment and provide conditions that attract wildlife. During the hot summer, watered lawns and shade trees attract prey animals. Bobcats will follow in search of food which increases the chances of human interaction. Typically, bobcats live near human populations without incident and sightings are rare. On the rare occasion an encounter with a bobcat occurs, it is important to keep your distance. Bobcats are frightened of people and will most likely flee during an encounter, but they will defend themselves with sharp claws if cornered or threatened. Do not leave pet food or small pets outdoors as it can attract bobcats and other wildlife. Do not offer any wild animal food or water as it can become accustomed to humans, losing its natural fear. A predator that loses its fear of humans becomes a safety risk. To keep both humans and animals safe, do not approach a bobcat.

The Fort Irwin Directorate of Public Works (DPW) has wildlife biologists on staff who are trained and can assist with bobcats creating a safety hazard or nuisance. If you have a bobcat or other wildlife concern, contact the DPW front desk at (760)380-5044 during regular business hours. After hours and on weekends, contact the Military Police at (760)380-4444 and a wildlife biologist will be notified.