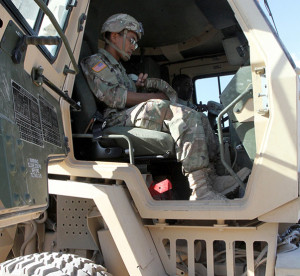 Sgt. Michael King and Sgt. Jerome Lee talk quietly with each other next to a Light Medium Tactical Vehicle on a hot, dusty afternoon in the cantonment area of the National Training Center in Fort Irwin, Calif.

The two NCO’s are with Echo Company, 328th Brigade Support Battalion, 56th Stryker Brigade Combat Team, 28th Infantry Division, and are trying to keep themselves cool while they wait for their convoy to travel to the railhead where their vehicles will be loaded for shipment back to Pennsylvania.

It has been a long, challenging couple of weeks for them at NTC. The training area, which is roughly the size of Rhode Island, is located in the Mojave Desert. Filled with sand and sparse vegetation, it is the kind of terrain that tests Soldiers’ abilities to adapt and thrive while completing their missions.

It is here that young Soldiers look to their mentors to help them navigate through the harsh climate and demanding “battlefield” scenarios. King and Lee take their mentorship roles seriously.

“I was active duty for 12 years and I’ve been here seven times, so I got a chance to offer my tutelage to the younger Soldiers,” said Lee, who is a wheeled vehicle mechanic and has a total of 18 years in the military. “I gave them my knowledge and I taught them what it was like to be in a realistic situation.”

One of those younger Soldiers, Spec. Michael Brigola, a computer detection systems repairer who lives in Philadelphia, not far from Lee, has taken full advantage of the experience of the NCO’s around him.

“I got a lot of help from Sgt. Lee about how to set up the work areas with camouflage tents and about the (basic issue Items), ” said Brigola. “(Lee) and Sgt. King are the two top NCO’s that give us advice about how to do things.”

King, the unit’s training NCO, expressed an immense appreciation for the opportunities that NTC offered during the 56th SBCT training cycle. “Soldier-to-Soldier relationships, learning teamwork, building that unity: we had a chance to do all that out here,” he said.

“This is a learning and teaching environment,” said King, a North Wales, Penn., native who gained a lot of insight on how to reorganize the training model for his unit. “I learned things that I’m going to take home and implement in our training: some new training that’s realistic for them.”

The mentorship doesn’t end at NTC. There are plenty of teaching opportunities back in their home station of Fort Mifflin, Penn.

“I just love giving back,” said Lee with a wide grin. “I remember all the mentors I had and what they gave me; I just love sharing what I know with my Soldiers.”