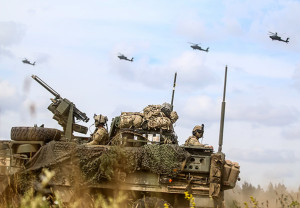 An Interim Armored Vehicle “Stryker” and AH-64 Apache helicopters with Battle Group Poland move to secure an area during a lethality demonstration as part of Saber Strike 18 in June 2018.

The Army Rapid Capabilities Office today announced the winners of a challenge designed to identify artificial intelligence and machine learning tools that could improve the speed and accuracy of electronic warfare operations.

Known as the Army Signal Classification Challenge, the competition invited participants to prove they had the best artificial intelligence and machine learning algorithms for performing “blind” signal classification quickly and accurately. The goal was to find solutions that could reduce the cognitive burden placed on electronic warfare Soldiers by identifying signals of interest in the electromagnetic spectrum.

The Army launched the challenge because the classic signal detection process is no longer efficient in understanding the vast amount of information presented to electronic warfare Soldiers on the battlefield by an ever-increasing number of satellite signals, radars, phones and other devices.

More than 150 teams from across universities, laboratories, industry and government participated. The first-place award of $100,000 went to Platypus Aerospace from Aerospace Corporation, a federally-funded research and development center. Second place, with an award of $30,000, went to TeamAU, made up of a team of individual Australian data scientists. Third place and $20,000 went to THUNDERINGPANDA of Motorola Solutions.

“The amount of interest and quality of performance was remarkable, including from nontraditional organizations,” said Rob Monto, Emerging Technologies director for the Army Rapid Capabilities Office, or RCO. “In doing this as a challenge, instead of a traditional Request for Information, we were really modeling what industry does to get at a problem quickly. It was performance-based, open to anyone and implemented without a lot of cost or burden placed on those entering. And now, in a matter of less than four months, we know mathematically who has the best performance for this initial step of applying AI and machine learning to signal classification.”

The challenge, which opened on April 30 and closed on Aug. 13, gave participants 90 days to develop their models and work with training datasets provided by the RCO. That was followed by two test datasets of varying complexity that were the basis for judging submissions.

Participants’ overall challenge score was based on a combined weighted score for both test datasets. Participants were also able to see how they were performing in relation to others in real time, via the participant leaderboard.

“This challenge targeted the upfront data collection, which is traditionally very labor intensive and time consuming,” Monto said. “Now we have a very accurate, very rapid algorithm for a specific problem set. With this research done on the front end, we can move forward with trying to build and integrate it into a real solution for the Army.”

A second phase of the competition is planned and details will be announced later this year.

The Army Rapid Capabilities Office rapidly develops, acquires, integrates and equips selected capabilities; implements streamlined acquisition methods, processes and techniques; and acts as an agent of change by challenging traditional approaches. This was the office’s first competitive challenge, which grew from the fielding of electronic warfare prototypes to address operational needs in Europe earlier this year.