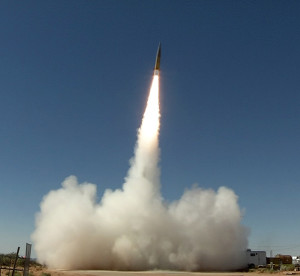 A Sabre short-range ballistic missile launches in June 2017 at White Sands Missile Range, New Mexico, for a test of the Patriot Advanced Capability-3 (PAC-3) Missile Segment Enhancement, an advanced missile defense system. The Army is working alongside the Air Force and Navy to develop the hypersonic weapons capabilities.

Similar to precision weapons being developed by the Air Force and Navy, the Army is developing its own unique hypersonic weapon.

Col. John Rafferty, director of the Long-Range Precision Fires Cross-Functional Team, discussed the development of these new long-range precision weapons at the Association of the U.S. Army’s Annual Meeting and Exposition, Oct. 9, 2018.

“We’re going to support the Space and Missile Defense Command’s pursuit of the long-range hypersonic weapon and we’ll help by developing the operational concept,” Rafferty said. “But essentially what we’re going to do is make sure that Soldiers are trained and ready to man the system when fielded, and that a mission-command structure and fire-control framework is in place.

“In order to achieve the disintegration and penetration effect, we need to have a mix of weapons, and exquisite, very expensive, hypersonic missiles with tremendous kinetic effect that are well-suited for strategic infrastructure and hardened targets,” he said.

Hypersonic weapons move five times faster than the speed of sound and are designed to potentially deliver a precision-guided airstrike anywhere in the world within an hour. Rafferty said the hypersonic program office is currently being established, and eventually a major general will be selected as program manager. 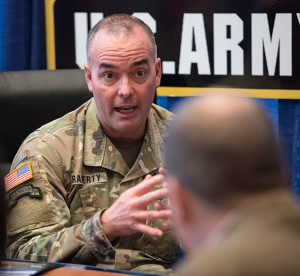 In the quest to maintain overmatch against America’s enemies, billions have been invested into the long-range precision fires, or LRPF, capability. Development of the Extended Range Cannon Artillery continues as the weapon will eventually replace the M109A6/A7. The weapon will feature a longer gun tube, a redesigned chamber, and a breech capable of surviving increased pressures that will propel the rounds up to 70 kilometers away. The precision strike missile, which will strike targets out to 499 kilometers (within the Intermediate-Range Nuclear Forces Treaty limit), is expected to be delivered in late 2022 or early 2023, Rafferty said.

These weapons will help offset the standoff capabilities of potential adversaries Russia and China. Rafferty equated his team’s work as fundamental to the success of multi-domain operations in accordance with the 2018 National Defense Strategy.

“What we’re charged to do is to establish overmatch at echelon that will enable us to realize multi-domain operations by knocking out the systems that are designed to create standoff — to separate us,” Rafferty said. “So the long-range fires are the key to reducing the enemies’ capability to separate our formations.”

The pressures of shouldering the Army’s No. 1 modernization priority has not overwhelmed Rafferty since taking over the LRPF Cross-Functional Team, or CFT. Rafferty said he welcomes the pressure of leading the CFT, a component of Army Futures Command. 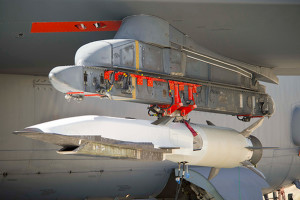 The Army plans to develop a hypersonic glide vehicle similar to the Air Force’s X-51A Waverider, shown here mounted under the wing of a B-52 Stratofortress a few years ago at Edwards Air Force Base, Calif. On a previous flight, the X-51A flew for more than three minutes at Mach 4.88 under scramjet power.

“The celebration of being the No. 1 priority ends pretty quickly when you’re sobered by the fact that now we need to deliver,” said Rafferty, who took over the director position this past spring. “Our nation has already invested a lot in this effort.”

Rafferty said he can lean on a military intelligence officer assigned to the LRPF CFT and a warrant officer who will serve as a targeting officer.

“For the first time … I really feel like our intelligence community beyond the Army intelligence is meeting us halfway at this,” Rafferty said. “And they are reaching out to us on ways that they can deliver targeting information much more quickly and without any intervention points.”

LRPF is the first of the Army’s six modernization priorities, the others being next generation combat vehicles, future vertical lift, the Army network, air and missile defense, and Soldier lethality.