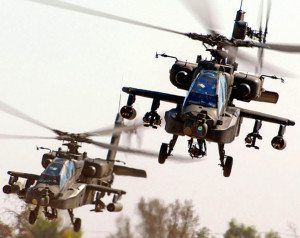 Future Vertical Lift projects are primed to expand on recent progress this fiscal year as the Army searches to replace its aging fleets of helicopters.

In less than six months, the new cross-functional team for FVL has already published two requests for proposals on a future attack reconnaissance aircraft and future tactical unmanned aerial systems.

“We were able to push those two efforts pretty quickly,” Brig. Gen. Walter Rugen, the team’s director, said Oct. 10 during a panel discussion at the Association of the U.S. Army’s Annual Meeting and Exposition. But “we’re not resting on our laurels. We have much more to do this coming year.”

Intended to be a smaller variant, the future attack reconnaissance aircraft, or FARA, will likely serve as a close combat conductor for advanced unmanned aerial systems as well as provide support to troops on the ground.

The anticipated award date for competitive prototypes is next June. Two industry performers will later be selected to Phase II in those efforts and receive a fixed funding level of about $735 million between fiscal years 2020-23, according to the solicitation.

The rapid solicitations to industry, Rugen said, were made possible by the great interaction in his team that includes personnel from the contracting and science and technology communities.

Part of the Army Futures Command, Rugen’s team was created last year alongside similar cross-functional teams to tackle six modernization priorities. The teams are designed to speed up an outdated acquisition process in order to get new capabilities to Soldiers faster.

“It’s about overmatch. We have to build that overmatch by 2028,” Rugen said. “Our current programs have to be vibrant enough to take that risk on, but we also have to look at the future risk and understand that and harmonize those two aspects.”

Future tactical unmanned aerial systems are to be developed as brigade combat team-oriented platforms and could eventually replace the RQ-7 Shadow.

“We heard for a long time [from industry] that you’re ready,” said Brig. Gen. Thomas Todd, the program executive officer for Army Aviation. “So, you’re going to get your chance. We’re ready to see what you got.” 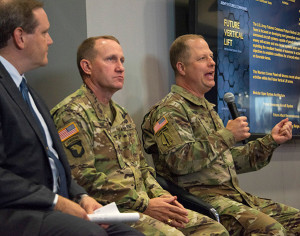 In December, the Army plans to award three vendors to further develop their technology over a three-year period of performance where Soldiers will also be able to provide feedback.

“We look forward to potentially having a couple solutions per vendor as well,” Todd said at the panel discussion. “I ask that you be agile in your proposals. Think about what we really need, get after it quickly because it’s going to happen very fast.”

The advanced UAS portfolio will also include air-launched effects, which could have unmanned systems launched from helicopters while in the air.

“We really have to get after lethality,” Rugen said. “We’re going to be very much focused on our air-launched effects, creating that overmatch with our pacing threats.”

Rugen also said his team is working toward a future long range assault aircraft, or FLRAA, which would be a medium-sized variant.

An analysis of alternatives for the aircraft is expected later this fiscal year. The Army will then wrap up its Joint Multi-Role Technology Demonstration program. Those two pools of knowledge will be important in realizing the next step forward.