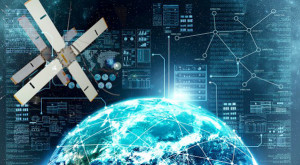 Bolstering the Army’s network against increasing enemy threats has become a crucial point of emphasis in the Army’s ongoing modernization efforts.

Although a network secure from peer threats is critical, officials said that network must be accessible across each level of the Army in order for it to be functional.

“The overall network strategy is to have a network that’s flat, fast, mobile and protected,” said Maj. Gen. Peter Gallagher, director of the Army Network Cross-Functional Team, or CFT. “What does that mean for me? That means we’ve got to have a network that our Soldiers can depend on. It will enable them to have unified network transport from every base, post, camp and station out to the tactical edge.”

Army leaders outlined goals for network modernization at the Association of the United States Army’s Annual Meeting and Exposition in Washington, D.C., earlier this month. Among those initiatives will be to develop an integrated network to win battles in peer-contested environments, and the CFT will work toward joint coalition interoperability. Another goal is sustaining the network’s command post.

Gallagher said eventually the Army plans to scale the integrated network to brigade-sized formations. The service will start fielding formations in 2020.

Much work remains to simplify the complex network and make it more user friendly, Gallagher said, but added the Army has been making strides toward achieving those goals.

A pilot for smaller, lighter kits for an expeditionary signal battalion will soon be tested. Next April, during a joint warfighting assessment and warfighting exercise, III Corps will be rolling out a “coalition interoperability mission partner environment.”

Advanced networking waveforms have already been incorporated into software-defined radios, he said.

“We’re working toward a common operating environment — whether it’s a command post, a dismount, a mobile platform, an aviation platform where we have a common look and feel, [or] a decision-making tool that allows leaders and Soldiers to understand and be able to communicate,” Gallagher said.

Finally the network must be protected against adversaries and measures must be taken to limit GPS tracking to protect valuable information and intelligence. 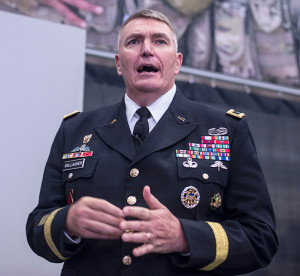 Maj. Gen. Peter Gallagher, director of the Army Network Cross-Functional Team, talks about new initiatives for the Army’s network during the Association of the Army’s Annual Meeting and Exposition Oct. 9, 2018, in Washington, D.C. Improving the Army’s network capabilities and security is one of the service’s top modernization priorities.

Since interoperability will be key to the success of the network, Gallagher said the CFT is working toward making the network interoperable with joint partners and accessible to coalition partners.

“The battlefield of the future is going to be incredibly data rich,” said Angela Dalton, a CFT partner and communications and networking systems group supervisor at John Hopkins University. “There are sources of information all over the battlefield that can provide incredible situational understanding. We need to have a network that enables through capacity and orchestration of the ability to get that information to decision makers where it’s needed, to war fighters where and when it’s needed.”

The Army Network is one of the service’s top six modernization priorities. Secretary of the Army Dr. Mark Esper said the network must be dependable and mobile in any environment.

The general added that the Network CFT will host another technical exchange meeting with industry and academia in early 2019.