FORT IRWIN, Calif. — It was a chance to sit down, connect and enjoy a hot, hearty holiday meal. Post Brig. Gen. Jeffery Broadwater, and Command Sgt. Major Matthew Lowe, along with fellow senior leaders, lined up and served Soldiers, family members, and civilians a robust dinner, Nov. 21, ahead of Thanksgiving Day.

“Ensuring the Soldiers receive a traditional Thanksgiving fare is at the utmost importance,” Chaplain Brown said as he blessed the day’s feast.

Senior leaders served turkey, roast beef, sweet potatoes, asparagus, stuffing and much more in heaping, American fashion. A variety of appetizers and desserts were also available in the dining room.

Smiles were had throughout the Consolidated Dining Facility as partakers mingled and ate their feast. The food service team prepped and worked for days to provide 200 pounds of turkey, along with eight full birds to feed the community. Food service manager, David Nottingham, who helped the cooks that day, said days like that where the soldiers come and help out is always a great moral booster and it sends the right holiday message to help one another.

Broadwater thanked the civilian staff and soldiers, while urging everyone to be safe over the holiday weekend, before he commenced to cutting the cake.

Korean War veteran Tom Holdernes joined Broadwater and Lowe to slam the saber cutting the ceremonial first cut. Holdernes’ wife Marie recently passed, so the community wanted to reach out and include him in the day’s festivities. Holdernes, 88,  served in the 1st Cavalry Army as a corporal, said he loved being included. “It was the greatest honor since I served,” he said. 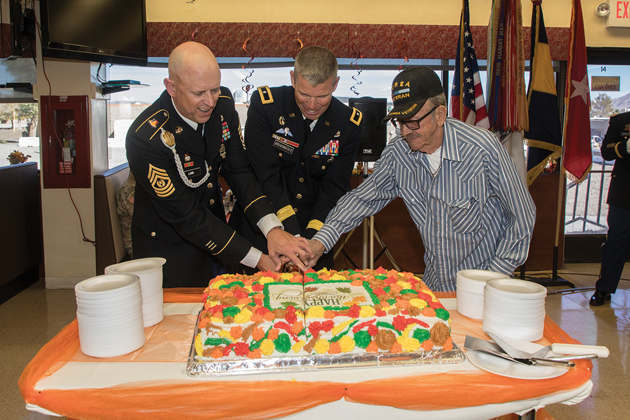 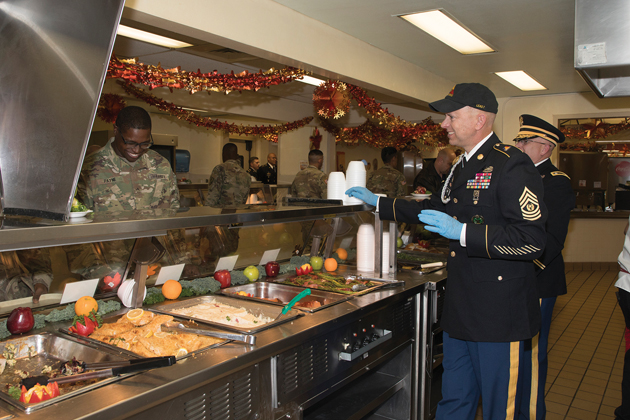