In her first visit to Fort Irwin, Leah Esper, the Secretary of the Army’s spouse, had the chance to hear from more than a dozen spouses and leaders about what’s working and where help is needed on post. Some of the topics discussed, included hiring and pre-employment training for spouses, childcare options and waiting lists, housing fees, educational and after school options, and medical care concerns.

In November, Mrs. Esper was provided a waiting list of about 60 for the Child Youth Services/Child Development Centers (CYS/CDC) on post but was told more options are coming. The CYS coordinator, Deborah Harris, said they are expecting an increase in FCC providers with the provisional hiring process that is offered.

Garrison Commander, Col. Seth Krummrich said, “That new policy from the Secretary of the Army is going to hit one of our top issues and it’s really going to help us out. I’m just saying this as a dad, I used FCC last year and it was phenomenal. Some people are not sure if they want their children in a facility like this (CYS), so FCC and that provisional hiring piece and being able to get those open sooner is going to get after that population and it’s fantastic, so that’s a big thank when you look at policies coming out of the Secretary of the Army’s office and it has a big impact to families here.”

Another hot topic was jobs for spouses and civilians.

Matthew Shanks is a spouse who said this when he found out he and his spouse were PCSing to Fort Irwin, he was not optimistic about the job hunt. “As soon as I saw where we were moving, I decided to start my own business.”

Right now, the overall hiring process averages more than 130 days (4 months) and the Secretary said his number one priority regarding Army civilian employees is reducing civilian time to hire to below 80 days.

When it comes to military spouses having to “restart the clock” and complete a background check, physical and paperwork with every PCS (permanent change of station) move and applying for a CYS job, Mrs. Esper said “that’s ending.” A new online CYS tool will streamline the process of hiring CYS employees, which helps cut down on waiting lists for children.

The new guidance removes barriers in the process and allows the Army to hire without the traditional recruitment procedures—that is, after public notice is given to a qualified applicant.

Olivia Templeton is a spouse who also said pre-employment training is a concern and believes an employment readiness manager is essential on post. “There’s no one on post who can help spouses create a resume,” she said.

The CPAC office (Civilian Personnel Advisory Center) is able to direct spouses to online tools, provide resume advice and do brief resume reviews but are not able to give in-depth training. Secretary Esper said new improvements to Career Advancement and Transition Assistance programs will also expand access and opportunities for spouses.

Civilians make up about 22 percent of the military force and Mr. Esper knows the Army’s civilian workforce is critical to military readiness.

During Mrs. Esper’s visit, spouses brought up concerns that they don’t think they’re getting what they pay for when it comes to their housing units on post; essentially from the amount that is taken from their service member’s BAH (basic allowance for housing).

Sandra Key, Chief of Housing/Program Manager said, “What our problem really is right now is that housing and BAH is based off our neighboring community and that’s Barstow. There’s not much economic growth there,” Key said. “So, we’re asking for this project to make these houses beautiful and we’re only giving them what the town of Barstow is basically worth for the housing.”

Housing told Mrs. Esper that residents will no longer get charged additional move-out fees, once they’ve left the installation, so the “pay and go” option puts family’s minds more at ease. She was also told there is a new system in place for work orders that will now set appointments for resident customers to provide more of a heads up for residents before work crews show up at their homes.

A high PCS season, which occurs during summer months, can have annual effects on the number of providers available, as providers are prone to PCS, as well. It leaves a brief shortage of primary care and other medical professionals to see and care for patients in a short period of time. Hospital officials were able to confirm to Mrs. Esper that as of the beginning of November, more PCMs (primary care managers) were available, which would cut down on wait times to schedule an appointment and see a doctor.

MedCom Commander, Col. Larry France was asked about specialty care options and said, “Orthopedic, physical therapy, dermatology, we have to a limited degree. If people need to be sent out of the network for specialty care, it becomes a little bit more challenging.”

Col. France addressed issues with network provider support and said, “Barstow doesn’t have a lot of specialty care, so our patients could end up going as far away as Victorville, or even farther, Loma Linda, or another military facility about three hours away, so it does become a little bit more of a challenge as far as getting our population fast specialty care.”

This was the Secretary of the Army’s second visit to Fort Irwin and, although it was his wife’s first visit, both have been to several military installations to see what’s working and address similar concerns.

To the directors, leaders and managers, Mrs. Esper wanted to make sure she brought the spouse’s concerns to them but also said, “We want to let you know your work does not go unnoticed.”

In a nutshell- Big changes coming to Fort Irwin:

• A new system to cut down on/eliminate a waiting list. The new system makes the employment transfer from CYS to CYS seamless because there’s no need for military spouses to re-apply and complete new background checks, paperwork or physicals at each, new installation

• CPAC provides brief resume advice and do brief resume reviews but are not able to give in-depth training. Secretary Esper said new improvements to Career Advancement and Transition Assistance programs will also expand access and opportunities for spouses.

• Work Orders will now be by scheduled appointment

• Residents will no longer get charged additional move-out fees, once they’ve left the installation

• More PCM providers are on board as of November 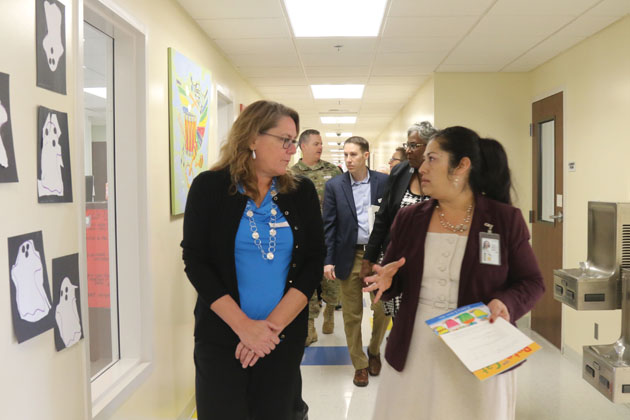