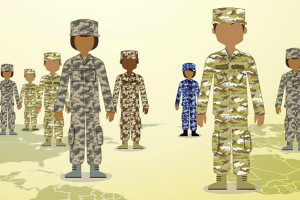 Less than a month remains for Soldiers to opt into the Blended Retirement System and so far only 19 percent of those eligible have switched to the new plan.

Pentagon officials are concerned many Soldiers will be missing out on benefits under BRS that they can take with them if they leave the Army before serving 20 years.

One key benefit of the new retirement system is that Soldiers can keep their money from the Thrift Savings Plan — including government contributions and matching funds — when they leave the service.

Under BRS, Soldiers will receive matching funds from the government every paycheck for their TSP contributions on up to 5 percent of their earnings. And if they decide to leave service before retiring, they will be able to keep those funds.

“This is an opportunity for Soldiers to get something, whether they serve to retirement or not,” said Henry Manning, a senior official with the Office of the Assistant Secretary of the Army for Manpower and Reserve Affairs.

He and Maj. Yungsong Han with that office have travelled to a number of installations across the Army to brief Soldiers on the new retirement system.

“We find 80 percent of the people in the audience say that they’re going to retire,” Manning said, “while the reality is that probably only 20 percent of them will actually retire.

“If you’re somebody who plays the odds, chances are opting in would be a better thing for you to do,” he said.

The clock is ticking, though, he added.

While all military members who began their service this year automatically fall under the new retirement plan, Congress gave existing troops until Dec. 31 to opt into BRS.

Active-duty Soldiers who had fewer than 12 years of service as of Dec. 31, 2017 are eligible; and so are reserve-component members with fewer than 4,320 points.

For those who do not stay in 20 years, opting into BRS is definitely beneficial, Manning said. “At least when you walk away, you walk away with the funds that the government has contributed (to TSP.)”

About 350,000 active-duty service members have opted into BRS so far, but the percentage of Marines who have chosen the new system is double the percentage of Soldiers. About 48 percent of eligible Marines have switched to BRS.

Manning explained that’s because the Corps required all Marines to fill out a form, whether they wanted to stay with the legacy plan or opt into the new. Other services only required those who want to change to go online and sign up.

All eligible Soldiers, however, were supposed to take online training this year concerning BRS.

A total of 93 percent from both active and reserve components have completed that online training, Han said.

Installation personal financial managers have also been training in BRS and can provide free counseling to service members and their families. In addition, MilitaryOneSource provides free financial support 24/7 at 1-800-342-9647, and a BRS calculator is at https://militarypay.defense.gov/Calculators/BRS/.

“Soldiers are still vacillating on whether they want to opt in,” Manning said. “If you’re not certain, you definitely want to opt in, because at least you walk away with some money at the end of your tour.”