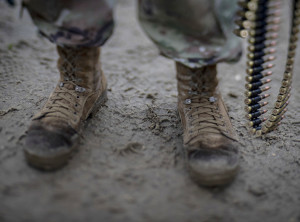 The effort will gather Soldier feedback toward development of improved footwear.

The Army’s current inventory of boots includes seven different styles designed for different environments and climates. The boots issued initially to recruits are the Hot Weather and Temperate Weather Army Combat Boots. Requirements for these are managed by the Army Uniform Board as part of the recruit “Clothing Bag.” The Program Executive Office Soldier’s Project Manager Soldier Protection and Individual Equipment maintains and updates the specifications for both boots.

The current generation of Army Combat Boots has not undergone substantial technical or material changes since 2010. New material and technologies now exist that may improve physical performance and increase Soldier comfort.

“Great strides have been made recently in the Army’s environment specific footwear, for jungle, mountain, or cold weather locations, but there is substantial room for improvement in the general purpose boots which are issued to new recruits,” explains Anita Perkins, RDECOM Soldier Center footwear research engineer and technical lead for the Army Combat Boot Improvement effort. “Most components of these combat boots have not been updated in almost 30 years.”

Surveys conducted by the Soldier Center report Soldier satisfaction with ACBs is lower than that with commercial-off-the-shelf, or COTS, boots, leading many Soldiers to purchase and wear COTS boots.

“The survey of over 14,000 Soldiers world-wide discovered that almost 50% choose to wear COTS combat boots instead of Army-issued boots,” Perkins said. “Many Soldiers reported choosing combat boots from the commercial market because the COTS boots are lighter, more flexible, require less break-in time, and feel more like athletic shoes than traditional combat boots or work boots.

Unfortunately, these characteristics often come at the cost of durability and protection.”

The Soldier Center’s Footwear Performance team believes new technologies can bridge the gap between the lightweight, comfortable, COTS boots and the durable, protective, Army boots. Recent advancements in synthetic materials and rapid prototyping can produce a boot with potentially the same protection, support, and durability of current Army boots, but lighter and more comfortable out of the box. To reach this goal, the Soldier Center is evaluating new types of leather and even some man-made materials which are much more flexible than the heavy-duty, cattle hide leather used in the current boots.

“Also included in the prototypes we are testing are new types of rubber and outsole designs, which are more than 30 percent lighter than the outsoles on the current boots,” said Al Adams, team leader for the Soldier Clothing and Configuration Management Team at the Soldier Center.

When working with industry to develop the prototype boots for this effort, Adams and Perkins put an emphasis on cutting weight. The boots being tested are up to 1.5 pounds lighter per pair than the ACBs currently being issued.

“In terms of energy expenditure or calories burned, 1-pound of weight at the feet is equivalent to 4-pounds in your rucksack,” Adams said.

The test boots will be fitted and fielded to 800 basic trainees at Fort Leonard Wood, Mo., and Fort Jackson, S.C., followed by 800 pairs going to infantry Soldiers at Fort Bliss, Texas. The Soldier Center team will be hand-fitting each pair of prototype boots throughout the month of January and then return in March and April to collect surveys and conduct focus groups to gather specific feedback.

“Soldiers live in their boots and many will tell you that there is no piece of equipment more important to their lethality and readiness,” said Adams. “A bad pair of boots will ruin a Soldier’s day and possibly result in injuries, so we really believe that each of these prototype boots have the potential to improve the lives of Soldiers”.

Simultaneous to the field testing, lab testing will be conducted on the boots at the Soldier Center to quantify characteristics like flexibility, cushioning, cut/abrasion resistance, and breathability. The combination of lab testing and Soldier recommendations will identify Soldier-desired improvements to the boot prototypes and rank the state-of-the-art materials and designs for Soldier acceptance, durability, and safety. The Soldier Center will then provide recommendations to PM SPIE and the Army Uniform Board to drive the next generation of Army Combat Boots.

“The development of new boots take advantage of the latest materials technology, and are functional and comfortable, is critical to ensuring that our Soldiers are ready to fight and win in any environment,” said Doug Tamilio, director of the RDECOM Soldier Center. “Soldiers are the Army’s greatest asset, and we owe it to them to make them more lethal to win our nation’s wars, and then come home safely.”