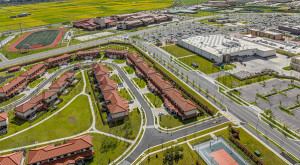 Residents of Family housing owned and leased by the Army in the United States and overseas, such as this Family housing at U. S. Army Garrison Humphreys, South Korea, received a survey via email on Jan. 15 asking them to rate the quality of housing and housing services. The survey runs through Feb. 14.

Residents of Family housing owned and leased by the Army can again rate the quality of their housing and housing services.

Administered by CEL & Associates Inc., the survey was emailed to approximately 10,000 residents living in Army-owned and Army-leased housing worldwide on Jan. 15, from ArmyHousingSurvey@celassociates.com.

The survey’s purpose is to receive firsthand accounts of what Soldiers and Families find important when living in Army-owned on-post and leased Family housing.

The housing survey is used to identify areas in housing operations that are successful or need improvement, where funding could have the most effect and are identified as top priorities to residents, and ascertain areas of success for the garrison housing office, according to Lt. Gen. Gwen Bingham, Army Assistant Chief of Staff for Installation Management.

“Your feedback about your experiences while residing in Army-owned or leased housing is critical to shaping the future housing and services provided by the Army,” Bingham said.

CEL & Associates emailed an initial housing survey in 2018 to 9,957 residents living in Army Family housing, with 2,025 residents responding (a rate of 20.3 percent). Army housing officials want to increase participation in the 2019 survey.

A higher response rate will give Army officials a more accurate depiction of Soldiers’ and their Families’ satisfaction with Army Family housing and the services offered by garrison housing offices, housing officials said.

“All surveys are confidential. Your frank feedback about your experiences in Army Family Housing may help to shape future housing programs and services and help guide future decisions that could impact generations of Soldiers and Families,” said Lt. Gen. Bradley A. Becker, Installation Management Command commander.

The Army wants maximum outreach and participation to measure residents’ satisfaction with housing accommodations, as well as the services they received from the Army Housing Office.

Residents who have not received an email with the survey link by Jan. 18 should contact their local housing offices.

The survey is open through Feb. 14. Residents of privatized Residential Communities Initiative housing will be surveyed in March.