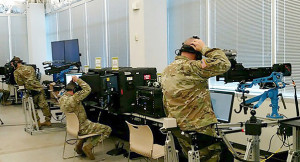 Soldiers prepare to operate training technologies during the STE User Assessment in Orlando, Fla., in March 2018. The assessment was part of an approach implemented by Maj. Gen. Maria R. Gervais to put industry prototypes in Soldiers’ hands at the beginning of the capability development process.

A four-man team of Soldiers sits in a nondescript building on Fort Belvoir, Va., each at his own desk, surrounded by three monitors that provide them individual, 3D views of an abandoned city.

On screen, they gather at the corner of a crumbling building to meet another team-represented by avatars-who are actually on the ground in a live-training area, a mock-up of the abandoned city. They’re all training together, in real time, to prepare for battles in dense urban terrain.

That’s the central goal of the Synthetic Training Environment-immersive, integrated virtual training-presented during a Warriors Corner session at the 2018 Association of the United States Army Annual Meeting and Exposition in Washington. The Army has been working toward this kind of fully immersive training experience for decades, and leadership hopes to have it operational as early as 2025.

In May 1993, Army RD&A Bulletin dedicated several articles to the concept and execution of distributed interactive simulation (DIS), “a time and space coherent representation of a virtual battlefield environment” that allowed warfighters across the globe to interact with one other as well as computer-generated forces, according to John S. Yuhas, author of the article “Distributed Interactive Simulation.”

Better, faster, stronger
While the name of the program seems to emphasize individual simulation units, its overarching purpose was to bring together thousands of individuals and teams virtually in real time. Central to DIS was the idea of interoperable standards and protocol, allowing each community — “trainer, tester, developer and acquisitioner” — to use the others’ concepts and products, Maj. David W. Vaden wrote in “Vision for the Next Decade.”

The article explained that “distributed” referred to geographically separated simulations networked together to create a synthetic environment; “interactive” to different simulations linked electronically to act together and upon each other; and “simulation” to three categories-live, virtual and constructive. Live simulations involved real people and equipment; virtual referred to manned simulators; and constructive referred to war games and models, with or without human interaction.

DIS has much in common with STE. Both provide training and mission rehearsal capability to the operational and institutional sides of the Army (i.e., Soldiers and civilians). They even share the same training philosophy: to reduce support requirements, increase realism and help deliver capabilities to the warfighter faster.

Users of STE will train with live participants and computer simulations, with some units training remotely. However, STE takes virtual reality training to a new level altogether by incorporating advances in artificial intelligence, big data analysis and three-dimensional terrain representation.

Current training simulations are based on technologies from the 1980s and ’90s that can’t replicate the complex operational environment Soldiers will fight in. They operate on closed, restrictive networks, are facilities-based and have high overhead costs for personnel, Maj. Gen. Maria R. Gervais, commanding general for the U.S. Army Combined Arms Training Center and director of the STE Cross-Functional Team, said in an August 2018 article, “The Synthetic Training Environment Revolutionizes Sustainment Training.”

Those older technologies also can’t support electronic warfare, cyberspace and megacities, the article explained. For example, Soldiers in the 1990s could conduct training using computers and physical simulators-like the ones showcased in Charles Burdick, Jorge Cadiz and Gordon Sayre’s 1993 “Industry Applications of Distributed Interactive Simulation” article in the Army RD&A Bulletin-but the training was limited to a single facility and only a few networked groups; the technology wasn’t yet able to support worldwide training with multiple groups of users in real time, like the Army proposes to do with the STE.

Gervais presented a promotional video during “Warriors Corner #13: Synthetic Training Environment Cross-Functional Team Update,” which said the STE will provide intuitive and immersive capabilities to keep pace with the changing operational environment. The STE is a Soldier lethality modernization priority of the U.S. Army Futures Command.

“With the STE, commanders will conduct tough, realistic training at home stations, the combat training centers and at deployed locations. The STE will increase readiness through repetition, multi-echelon, multidomain, combined arms maneuver and mission command training. And most importantly, the STE will train Soldiers for where they will fight,” said Gen. Robert B. Abrams, then-commanding general of U.S. Army Forces Command, in the same video. Abrams is now commander of United Nations Command, Combined Forces Command, U.S. Forces Korea.

Today, simulations in the integrated training environment do not provide the realism, interoperability, affordability and availability necessary for the breadth of training that the Army envisions for the future. The STE will be able to do all that-it will be flexible, affordable and available at the point of need.

“This video helps us get to shared understanding, and also awareness of what we’re trying to achieve with the synthetic training environment,” Gervais said during the AUSA presentation. “But it also allows us to understand the challenges that we’re going to face as we try to deliver this.” 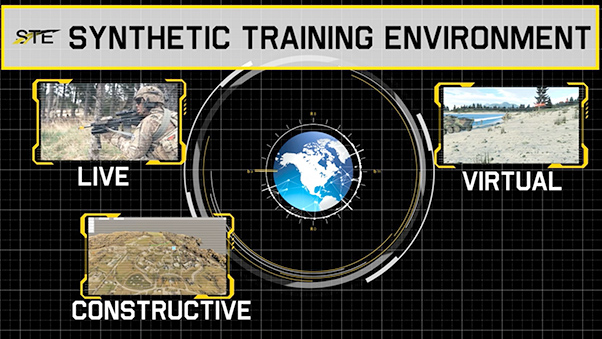 The STE will merge live, virtual and constructive simulations into a single, cohesive training capability that provides a common operating picture from the battalion to the joint task force level.

Challenges ahead
“We don’t have the right training capability to set the exercises up,” said Mike Enloe, chief engineer for the STE Cross-Functional Team, during the presentation. “What I mean by that is that it takes more time to set up the systems that are disparate to talk to each other, to get the terrains together, than it does to actually have the exercise go.”

The Army’s One World Terrain, a 3D database launched in 2013 that collects, processes, stores and executes global terrain simulations, has been the “Achilles’ heel” of STE from the start, Enloe said. The Army lacks well-formed 3D terrain data and therefore the ability to run different echelons of training to respond to the threat. The database is still being developed as part of the STE, and what the Army needs most “right now from industry is content … we need a lot of 3D content and rapid ways to get them built,” Enloe said. That means the capability to process terrain on 3D engines so that it can move across platforms, he said, and steering clear of proprietary technologies. The STE is based on modules that can be changed to keep up with emerging technologies.

The Army also needs the ability to write the code to develop the artificial intelligence that will meet STE’s needs-that can, to some extent, learn and challenge the weaknesses of participants, he said.

Retired Gen. Peter W. Chiarelli, 32nd vice chief of staff of the Army, emphasized during the presentation that the Army needs to move away from the materiel development of the STE and focus on training as a service. “I believe that a training environment should have two critical aspects to it,” he said: It should be a maneuver trainer, and it should be a gunnery trainer.

Changing the culture
Brig. Gen. Michael E. Sloane, program executive officer for Simulation, Training, and Instrumentation, said the leadership philosophy of STE’s development is about fostering culture change and getting Soldiers capabilities faster. “We have to be proactive; the [cross-functional teams] have to work together with the PEOs, and we’re doing that,” he said. “Collectively, we’re going to deliver real value to the Soldier, I think, in doing this under the cross-functional teams and the leadership of the Army Futures Command.”

Many organizations are involved with STE’s development. The U.S. Army Combined Arms Center – Training and the U.S. Army Training and Doctrine Command capability managers are working requirements and represent users. PEO STRI is the materiel developer. The U.S. Army Maneuver Center of Excellence is responsible for the infantry, armor and combined arms requirement. And finally, the assistant secretary of the Army for acquisition, logistics and technology (ASA(ALT)) serves as the approval authority for long-range investing and requirements.

With the Futures Command and ASA(ALT) collaborating throughout the development of STE, Sloane believes the Army will be able to reduce and streamline acquisition documentation, leverage rapid prototyping, deliver capabilities and get it all right the first time.

Gervais reminded the AUSA audience in October that she had spoken about STE at the annual meeting two years ago, explaining that the Army intends to use the commercial gaming industry to accelerate the development of STE. “I did not believe that it couldn’t be delivered until 2030. I absolutely refused to believe that,” she said. In 2017, the chief of staff designated STE as one of the eight cross-functional teams for Army modernization, aligning it with Soldier lethality.

Since then, STE has made quite a bit of progress, Gervais said. The initial capability document for the Army collective training environment-which lays the foundation for STE-was approved in 2018. The Army increased its industry engagement to accelerate the development of STE, according to Chief of Staff of the Army Gen. Mark A. Milley’s direction, which led to the awarding of seven other transaction authority agreements for One World Terrain, followed by a user assessment in March 2018. In June, Secretary of the Army Dr. Mark T. Esper and Milley codified STE in their vision statement. “We’re postured to execute quickly,” Gervais said.

In the meantime, she said, there has been a focused effort to increase lethality with a squad marksmanship trainer in the field to allow close combat Soldiers to train immediately. The Army also developed a squad immersive virtual trainer. “We believe we can deliver that [squad immersive trainer] much quicker than the 2025 timeframe,” she said.

Conclusion
STE is focused on establishing common data, standards and terrain to maximize interoperability, ease of integration and cost savings, Gervais said. With the right team effort and coordination, she believes STE can be delivered quickly. Perhaps in a few short years, STE can achieve the lofty goal that DIS had for itself, according to Yuhas: Revolutionize the training and acquisition process for new weapon systems.