FORT IRWIN, Calif. — With 800,000 federal employees out of work in the longest government shutdown in U.S. history (35 days), a cry for help came out right here in Fort Irwin—an obvious hub of government workers.

Michelle Garin works on post and was still receiving her paycheck…but for more than 30 days, her husband was not.

As of Jan. 25, she said, “My husband, along with the other 1,000-plus government employees at FCC Victorville are currently working and not receiving a paycheck.”

Garin’s husband works at the Federal Correctional Complex with employees she said are mostly veterans—some who have single-income families. She said those furloughed workers have been struggling to afford groceries and day-to-day essentials that some may take for granted, especially living in an area with a higher cost of living, like Southern California.

“I didn’t realize correctional officers were affected too,” Amelia Small said. “I don’t think they have the same support network we all do.”

Small was the first to respond to Garin’s Facebook request for assistance. Her family just moved to Fort Irwin last month but that didn’t stop her from donating gift cards, she said, so those in need could buy whatever they needed.

Lilly Ortega and her husband Sgt. 1st Class Jesus Ortega, had similar thoughts when deciding to donate money. Ortega said, since her family actually received a paycheck, she thinks she and her husband should always make room to help those in need.

“We felt compelled to help because, we know what it’s like waiting for that paycheck to buy necessities,” Mrs. Ortega said. “It might be the only pay check for some families!”

Meg Kmetz has lived on post for about a year and decided to donate some baby items.

“I think it’s something everyone should do when they have the ability to help others,” Kmetz said. “I was always raised to help others when they are in need. I would hate for someone to go starving or their child not be able to have diapers because of this shutdown.”

Garin collected the donated items and took them to the Federal Correctional Complex Administration building to distribute to those in need.

“We have all experienced that panic and fear of not having the funds to provide for our family more than once because of a shutdown in the past few years,” Garin said.

More than 50,000 TSA workers were among those who missed a paycheck but were expected to still go to work.

The Coast Guard, unlike other branches of the armed forces, is funded by the Department of Homeland Security. About 41,000 active-duty service members and 2,100 civilians worked without a paycheck.

The other branches of the military fall under the Department of Defense, which is fully funded until Sept. 30. 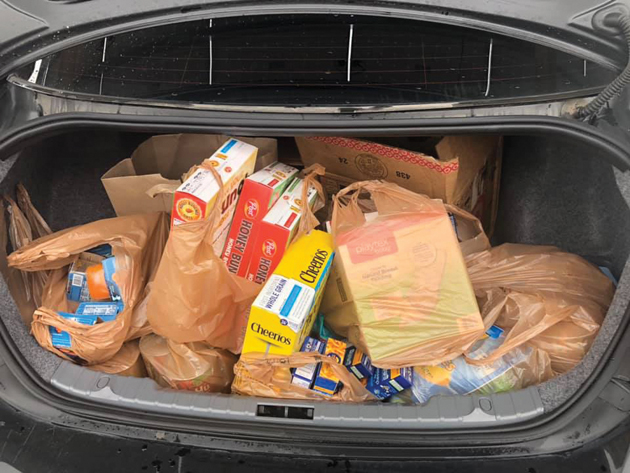 The Fort Irwin community answered the call for help and donated everything from baby items to cereal and food for local, furloughed workers.