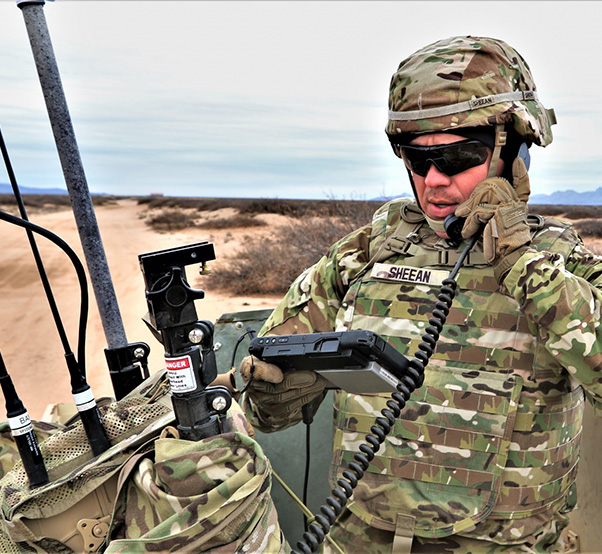 Staff Sgt. Micah Sheean, an electronic warfare specialist, communicates from the high mobility multipurpose wheeled vehicle with the mobile personnel. Everyone involved in the intelligence gathering must be able to communicate what they gather.

“The purpose of this collaboration is significant to the Army and the future of EW and cyber electromagnetic activities (CEMA)” said Chief Warrant Officer 3 William Insch, an EW Technician with the Army’s Project Manager Electronic Warfare and Cyber (PM EW&C). “These two teams are literally pushing the envelope in helping to determine future Army doctrine and tactics, techniques, and procedures that will influence the entire force.”

The EW systems are prototypes made up of many different parts, some of which are already fielded within the Army. However, these teams are learning how to incorporate other, new parts while reviewing the capability’s true effectiveness.

Presently, the combined system includes a Sabre Fury and a VROD Modular Adaptive Transmit (VMAX), which provides information and messaging to the Raven Claw. The Raven Claw then processes that information, which enhances EW planning and management capabilities, adds Bass. 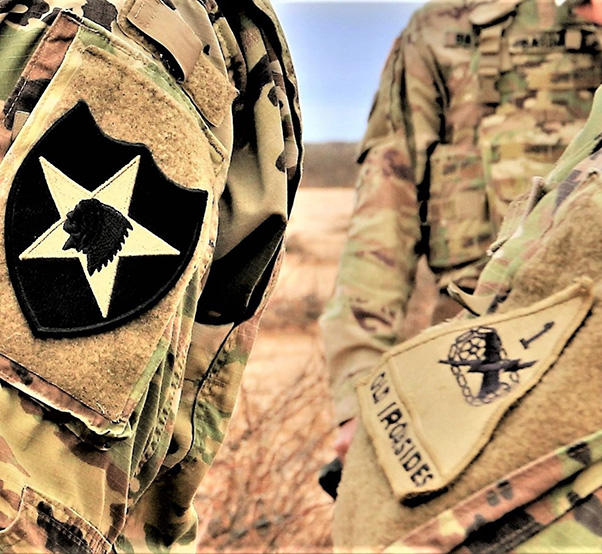 The system ultimately deciphers “who’s talking and where they are talking from,” explains Sgt. 1st Class Ryan Beach, an EW specialist with 2 ABCT, 1 AD.

The teams are able to see the frequencies by looking at a screen, which looks like an old school radio that has dials. “If you look at it like a radio, you’re able to see where the spikes are and tune into that station,” said Staff Sgt. Christian Lehr, an EW specialist with the 2nd Brigade, 2 ID. “Then, if I go in Direction Find mode, I can see where it’s coming from in space and time.”

“The purpose is to give commanders real-time information,” said Beach. “This isn’t us giving them analysis, but giving them something to make an accurate decision now. This is important because this non-lethal capability augments the lethal capabilities that our brigade already has, which ultimately makes us a stronger fighting force.” 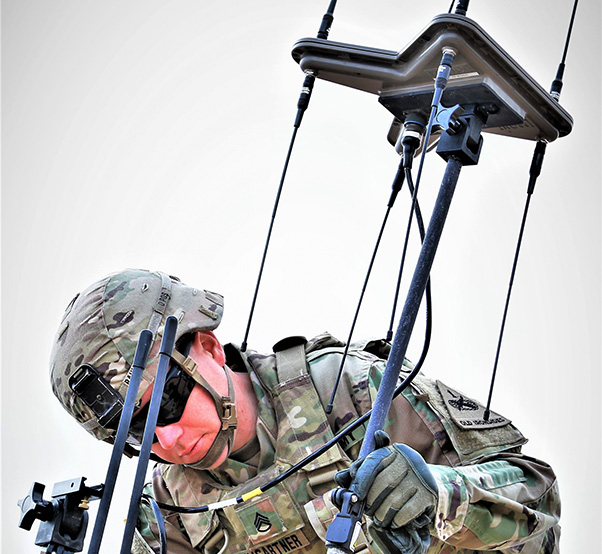 The collaboration started off with teams “learning how the overall system works and how to identify what signals are interesting enough to monitor,” said Bass.
Once they figured out the ins and outs of the system, it was time to test it in the field.

The conclusion, Bass mentions, is, “overall, the Soldiers were grateful to receive EW systems that enable them to become more of an asset to their unit; however, they stressed that the new capability they were evaluating should be the most up-to-date version of the system.”

“In the coming months, the EW capability set, will allow the 2 ABCT’s EW Soldiers the opportunity to identify additional critical training objectives and expand on their understanding of the systems,” said Master Sgt. Adam Brege, EW noncommissioned officer in charge, 2 ABCT, 1 AD. “Much of the training being conducted will be during 2 ABCT’s Strike Focus and Iron Focus exercises where the Soldiers will be employing the systems in support of the brigades’ scheme of maneuver.” 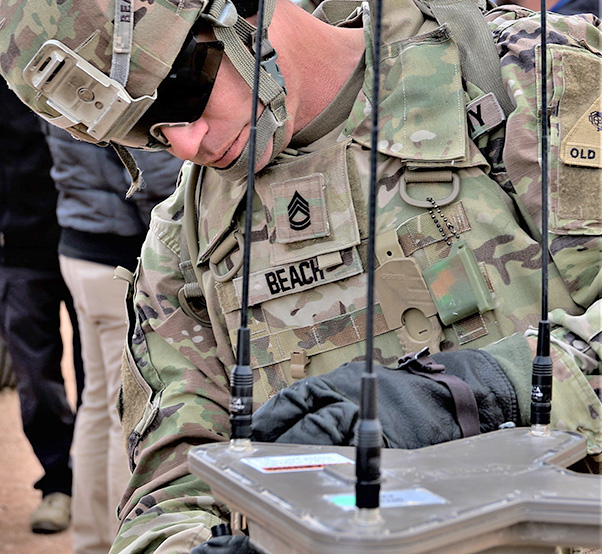 Sgt. 1st Class Ryan Beach, an electronic warfare specialist with 2nd Armored Brigade Combat Team, 1st Armored Division, fixes his portable equipment, which is one part of the overall modernized equipment and will be carried on the back. 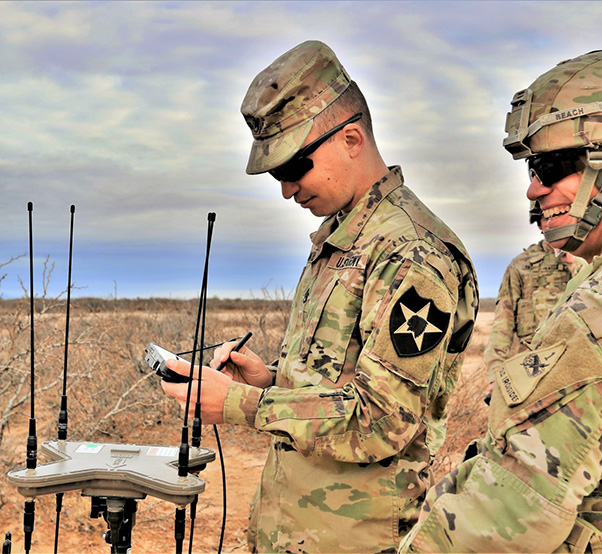 The new electronic warfare modernized equipment has many parts, some which are already fielded in the Army, and requires teams in order to be fully effective. Staff Sgt. Brett McCaskill, assigned to 2nd Brigade, 2nd Infantry Division, and Sgt. 1st Class Ryan Beach, with 2nd Armored Brigade Combat Team, 1st Armored Division, are in a team to locate and decipher enemy frequencies from a one known location. 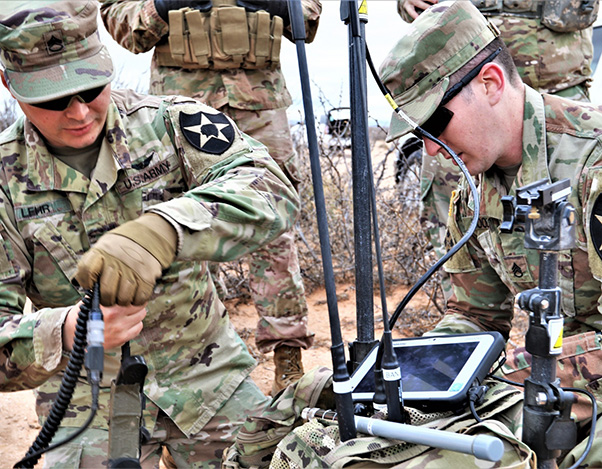 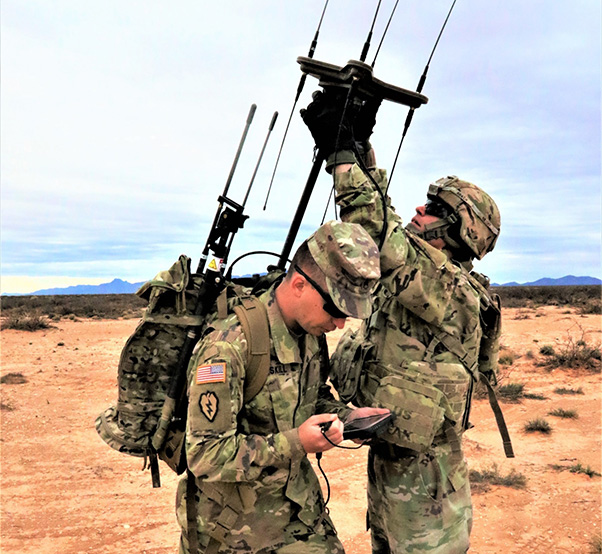 Staff Sgt. Brett McCaskill, assigned to 2nd Brigade, 2nd Infantry Division, and Sgt. 1st Class Ryan Beach, with 2nd Armored Brigade Combat Team, 1st Armored Division, make adjustments as they deploy their equipment to see how effective it is. They must work together to ensure they can pick up the right frequencies while communicating the interference plan with everyone involved.