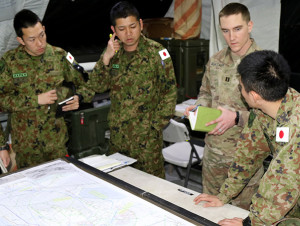 Capt. Alexander Quataert, 1st Stryker Brigade, 25th Infantry Division, and soldiers from the 72nd Tank Regiment, Japanese Ground Self Defense Force, analyze a map of desert terrain in preparation for their February rotation at the National Training Center, Jan. 29. The two units are joining together, along with other Army units, Marines, and airmen from throughout the world to form “Combined Joint Task Force Arctic Wolves.” The CJTF includes more than 500 Japanese soldiers, the most to ever participate in an overseas joint training exercise. The NTC rotation officially started Feb. 4.

More than 4,200 members of the 1st Stryker Brigade Combat Team faced an 80-degree temperature difference from their home base in Fairbanks, Alaska, when they began their rotation Feb. 4 at the National Training Center at Fort Irwin, Calif.

They have traveled 3,485 miles to test their combat readiness to be globally deployable and regionally engaged.

Throughout the training rotation, 1/25 SBCT will exercise not only the combat arms skills of the brigade, but also incorporate enabler units from special operations; civil affairs; psychological and cyber operations; and the chemical, biological and radiological field. Also joining the brigade at NTC is the 72nd Tank Regiment from the Japan Ground Self Defense Force, whose presence will help strengthen the brigade’s ability to fight across multiple domains.

“When we deploy to the National Training Center, we will fight as a joint-multinational team that will swell to upwards of 6,000 soldiers, airmen and Marines,” said Col. Matthew Brown, 1st Stryker Brigade’s Commander. “We’ve also been strengthening our bilateral relationship with the JGSDF during the past eight months, increasing our ability to fight together,” he said.

Cross-domain training is necessary to fight ever-changing threats in the world today. Adding Japanese allies into the fight creates a stronger force, though it does come with unique challenges, such as language barriers and different operational practices. The BCT has been working through these challenges by partnering with Japan this past year during multiple exercises both in Alaska and Japan.

NTC not only trains soldiers for a firefight, it incorporates role players acting as key leaders, local civilians, refugees, and other types of individuals the unit may encounter in a sovereign state. In addition to fighting the enemy, the newly formed Combined Joint Task Force Arctic Wolves will mitigate situations such as local civilian protests and host nation humanitarian issues.

Within the training area, the Arctic Wolves and their partners will test their lethality using a complex system of lasers and sensors called the Multiple Integrated Laser Engagement System, or MILES. The MILES gear simulates weapons fire and taking damage and casualties. The equipment is attached to every person, weapon system, and vehicle to track each element’s effectiveness in the fight.

“When someone or a vehicle is hit, we actually have to count them as a loss towards our future missions,” said Maj. Wade Smith, the executive officer for the BCT. “This makes us plan more effectively while utilizing all of our resources more efficiently. This is important because it gives us real-life statistics without actually putting our force in immediate danger. This is the ultimate way to train, to fight, to win,” Smith said.

After the 14 days in “the box,” and following live-fire exercises, the unit will enter the regeneration or final phase of the rotation. During this phase, the Arctic Wolves will conduct maintenance operations, load trains and ship equipment back to Fort Wainwright in Fairbanks. All Stryker BCT soldiers will return to Fort Wainwright within the first two weeks of March.