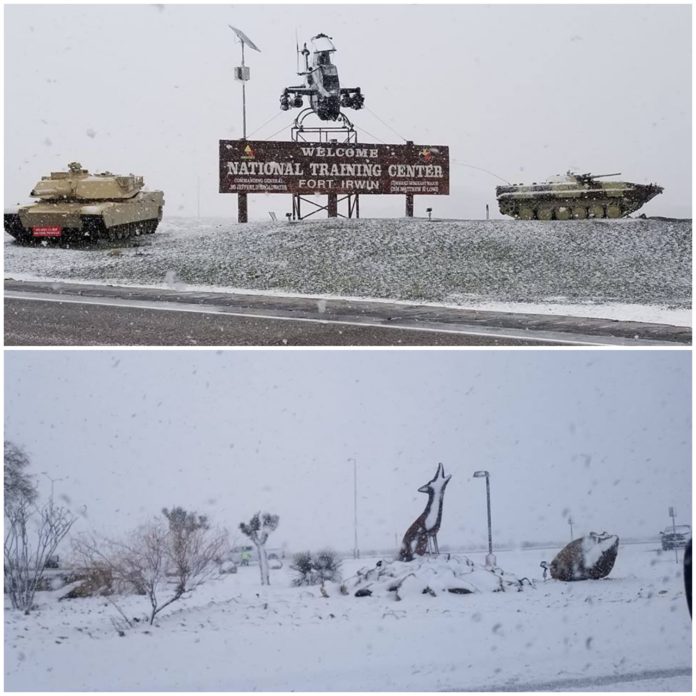 A white Christmas in … February? Not quite but thousands of Fort Irwin residents woke up to a thin blanket of snow on their grass (rocks, roads or ground.)
Snow dropped at levels of just 1,500 feet altitude. According to the National Weather Service, Victorville got about a half-inch of snow. Apple Valley and Hesperia each received an inch.
Flurries are not uncommon at Fort Irwin, though. Nearby Barstow, in the central Mojave, averages 1.3 inches of snow annually, which includes both snow-less winters and large storms. Fort Irwin may not receive significant snow each year, but flurries are known to fall at least once each winter; and a decade ago, more than a foot of snow pounded the National Training Center, shutting down the post and forcing some employees to sleep overnight at work, due to road closures.
Many shared their photos on our “National Training Center/Fort Irwin” Facebook page. The comments ranged from “Wow!” and “Whoa!” to “No way,” and “OMG!” There were comments from new residents who are from cold-temperature states said they thought they were finally escaping snow.
There were also comments from Soldiers and families who trained or used to be stationed at Fort Irwin and had a chance to go down memory lane and remember years ago when they experienced extremely cold weather and temperatures here.
“DA Bburn” said on Facebook, “I remember that happening in the 80s during my time there.”
Art Crash said on Facebook that he remembers being at NTC in 1984 with HQ CO 6/31st when he went to sleep under his CO’s jeep and woke up covered in snow.
Chistopher Gentemann said, “I think in ‘96 it did the same thing. I saw snow, hail, freezing rain, rain and then into the 100’s all in one day … Craziest thing I’ve ever seen.”
Michelle Pappert said “OMG, I was at Irwin for 3 years and never saw snow.”
Thousands of soldiers were still out in the Box training during the rare weather, too, as service members must train in rain, snow, sleet or shine.
Ironically, this came at a time with the 1st Stryker Brigade Combat Team from Alaska was here training, so they may have also been confused, thinking they were getting a reprieve from the snow.
“Rotational soldiers should be happy ‘cause they are from Alaska,” Alvaro Bautista said on our Facebook page.
David Kimmel may have provided a reality check for residents when saying, “Don’t worry friends, in a few months it will be back to 120 degrees.”
The week before the High Desert saw our snow, the San Bernardino County mountains were loaded with snow, including Big Bear which saw more than a foot.
The snow issues closed Interstate 15 for nearly four hours.
According to the NWS, a major storm struck San Bernardino County on the same day 75 years ago.
Some complained about traffic, road closures and road conditions but overall, the Fort Irwin community seemed to agree with Kathy Cournoyer who said, “I have to say snow in the desert is beautiful. How lovely. What a treat I love it.”

Inspiring a bright future from the past

That’s A Wrap! Students, families celebrate graduations with a twist