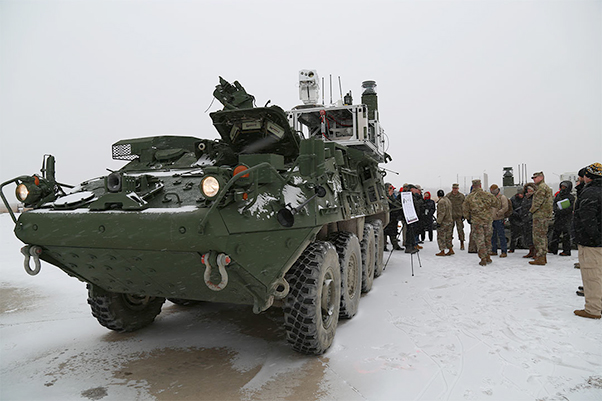 The NBCRV demonstration – held at the Combat Capabilities Development Command Chemical Biological Center – provided a first look for many at the brand new suite of chemical sensors deployed on the NBCRV, a huge leap forward in terms of capabilities for not only the vehicle but for CBRNE Soldiers tasked with operating and carrying out missions using the NBCRV.

Upgrading with purpose
For years, Soldiers have used the Stryker, an eight-wheeled armored fighting vehicle and true workhorse of the Army, to address chemical, biological, radiological and nuclear threats on the battlefield. When modified with CBRN chemical detection sensors, the Stryker is known as the Stryker Nuclear, Biological and Chemical Reconnaissance Vehicle or NBCRV.

Currently, CBRN Soldiers investigate potential CBRN threats at close range from a slow-moving or completely stopped vehicle, sometimes directly exposing the vehicle to the threat in order to conduct sampling and often creating an easy target for the enemy. It was clear to many in the Science and Technology community, the CBRNE community and the Army that the NBCRV had opportunities for modernization.

“This capability is meant to operate outside the threat,” Scott Kimmel, Deputy Commandant of the U.S. Army CBRN School said. “NBCRV has to operate with a cavalry squadron because the days of the NBCRV being left in the rear of the fight are over.”

An NBCRV, outfitted with the new chemical detection sensor package, rolls into view during the demonstration.

The team developing the sensor suite upgrade had three main goals to accomplish.

The team had to develop a standalone package allowing the sensors package to be placed anywhere. To increase Soldier safety, the package needed to perform remote detection. Additionally, on-the-move detection was a necessity.

1. The Deep Purple Unmanned Aerial Vehicle equipped with the Array Configurable of Remote Network Sensors flies sensors into a chemical cloud for interrogation.

4. The Vehicle Integrated Platform Enhanced Radiation Detection, Indication, and Computation is the NBCRV’s internal point sensor and is specifically tailored for mounted operations in radiological-nuclear environments.

5. The Mounted Enhanced RADIAC Long-Range Imaging Networkable (MERLIN) system, which is comprised of two subsystems that are complementary but work independently of each other, MERLIN-Imager (MERLIN-I) and the MERLIN-Applique (MERLIN-A). MERLIN-I enables stationary standoff radioisotope detection and MERLIN-A consists of four sensors mounted on the corners of the NBCRV, enabling moving standoff detection.

6. The Chemical Sensor Detector analyzes ground liquids using a laser and spectrometer and is deployable on-the-move. 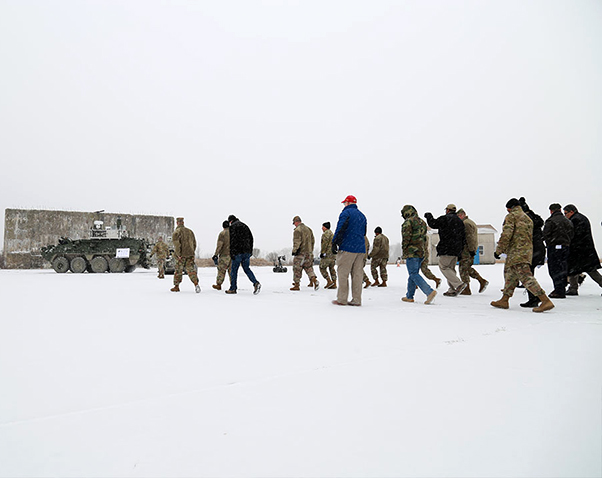 NBCRV demo highlights
The morning’s demonstration at the CCDC Chemical Biological Center’s additive manufacturing facility and test range site involved one NBCRV, one unmanned ground vehicle and one Humvee. Sensor packages were mounted atop both the NBCRV and UGV. The sensor package was also loaded on a trailer towed behind a Humvee to illustrate the sensor package’s ability to be forward deployed in a variety of ways and on a variety of platforms.

As the snow continued to fall, visitors and sensor operators interacted during a static display of the technology, asking questions and giving feedback. Following the static display, the NBCRV and UGV were sent into the test field to continue the demonstration. A nearby shelter offered a place for visitors to warm up and observe two mock scenarios to showcase the new capabilities of the sensor package via monitors inside the shelter.

A collaborative effort
The NBCRV marks a major milestone for the CBRNE community, not only in terms of the capability developed but in terms of collaboration among so many organizations.

“This has really been a tremendous effort to ensure we’re delivering the best capabilities to the warfighter,” Strauss said. “It’s been a team of teams, not a singular effort, to make this all come together.”

“It’s taken a whole lot of folks to make this work,” said Douglas Bryce, Executive Officer of JPEO-CBRND. “Our requirements generator, our S&T folks, our advanced development and our testers all have to come together and the success of the NBCRV is a great testament to everyone involved. This effort reinforces the importance of collaboration with our partners.”

A mentality shift
Aside from demonstrating what future warfighters may face in the field, the presentation also revealed a shift in how the Army thinks about chemical and biological threat detection on the battlefield.

“With these sensor upgrades, the goal is to transition from a modified Stryker to a Stryker with a sensor suite package,” Peter Bryant, project specialist at CCDC Chemical Biological Center said. Bryant plays a lead role in the overall design, fabrication and installation of the sensor suite package.

The mentality shift extends beyond how the technology is deployed.

“We can’t develop capabilities to complete legacy missions,” Kimmel added. “We have to look at our future mission, and that future mission is stay out of the hazard and allow maneuver commanders to make decisions through better understanding of the CBRN environment.”

“This is a first step toward realizing integrated early warning on the move,” Daniel McCormick, deputy joint program executive officer for operations and modernization at JPEO CBRND said.

“If we can give commanders an extra 30 seconds to help them make a more informed tactical decision,” McCormick added, “then that’s what we have to work towards quickly.”

“From last April at the Maneuver Support Sustainment Protection Integration Experiment at Fort Leonard Wood in Missouri to now, we’ve come a long way in short order. It’s absolutely amazing!” said Brig. Gen. Antonio Munera. “We’re all on the same sheet of music, we’re all headed in the right direction for the benefit of the warfighter. It’s the biggest technological leap forward I’ve seen in my 28 years in the Chemical Corps.” 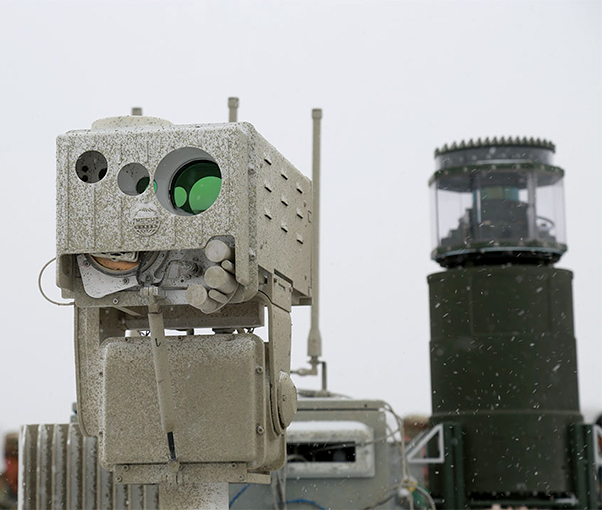 The iMCAD is part of the NBCRV sensor suite upgrade.

Looking forward
The concept of an easily deployable sensor package for the NBCRV platform is where the Army is heading, but the overall setup and sensor package layout will inevitably go through further development and testing before final decisions are made on the design.

“We’re developing a capability to reach the 21st century,” Ron Hann, Ph.D., director of the Defense Threat Reduction Agency and the United States Strategic Command Center for Combating Weapons of Mass Destruction said. “There’s still work to do to improve the capability, but this is a solid step in the right direction.”

Future upgrades to the sensor suite will include the addition of two new sensors to enable biological detection and assessment capabilities, as well as modifications to the overall design to reduce size, weight and power needed.

According to sensor designer Bryant, the system is designed to be somewhat modular so that, depending on the needs of the mission, Soldiers could switch out certain sensor capabilities to ensure their NBCRV is equipped with the right sensors and tools for the mission.

“As we look to integrate chem/bio defense, it’s examples like this that highlight the progress we’re making,” Eric L. Moore, Ph.D., director of CCDC Chemical Biological Center said. “This rapid prototyping approach, along with working closely with the maneuver community, is the crux of our mission moving forward.”

In May, the team of operators will showcase the NBCRV’s capabilities at the Joint Warfighter Assessment 2019 in Washington state.