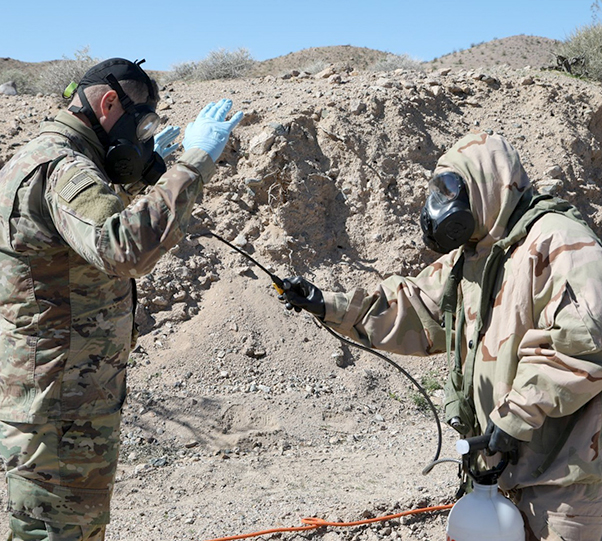 One Soldier from the 44th Chemical Company, Fort Bliss, Texas, sprays water at a field decontamination station during the March training rotation at the National Training Center, Fort Irwin, Calif. The Soldiers, attached to the 83rd Chemical, Biological, Radiological, Nuclear Battalion from Fort Stewart, Ga., and the 2nd Brigade Combat Team of the 1st Infantry Division, Fort Riley, Kansas, spent 14 days in the Mojave Desert working together in various chemical and biological operations such as personnel decontamination.

“The first is that my task force has to operate as a team alongside the 2nd BCT from Fort Riley, Kansas,” he said. “At our home station in Georgia, there are few opportunities to train in this type of very difficult terrain. What we are doing here tests our systems and tests our Soldiers.

“The second benefit is that it shows my task force what a maneuver force does in the field,” Kelly continued. “This provides a good experience and recognition of the size of our supported force and the geographic scale of the battle.”

The National Training Center covers more than 1,200 square miles midway between Los Angeles and Las Vegas, Nevada. Troops under Kelly’s command do not get to visit either city during their 14 days living and training in NTC’s desert. 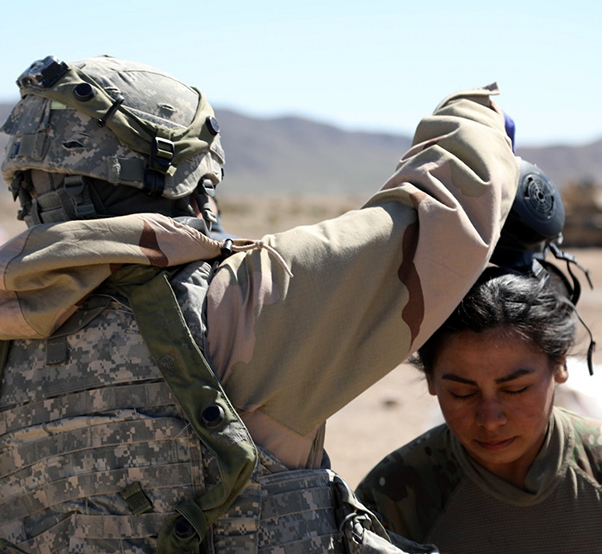 One Soldier from the 44th Chemical Company, Fort Bliss, Texas, helps another Soldier remove her uniform at a field decontamination station during the March training rotation at the National Training Center, Fort Irwin, Calif.

Kelly noted that the training — both the actual operations and living in an austere environment – is stressful, and mistakes happen.

“Sometimes, we correct them immediately as Soldiers and teams strive to complete a mission,” he said. “But sometimes, we let them work to solve a problem and then show them an easier path as a learning opportunity in a set of circumstances that we can only find in this rugged environment.”

Soldiers in the 83rd, many of them on their first enlistment term, have never seen or experienced anything like this, said Kelly.

Amidst all the equipment and personnel, the heart of the mission is the chemical response team and how they conduct sensitive site exploitation. At a clandestine bio warfare facility built into a sand berm deep in the desert, 2nd Lt. Brandon Miller, platoon leader from Monroe, Washington, noted that his 12-person team came to inspect a facility after the 2nd BCT cleared the area of hostiles. Intelligence reports suggested that it was a production facility of some kind.

“We do not know what is inside this location until we actually go in for examination,” said Sgt. 1st Class Gabriela Bahena, sample team leader from Daytona Beach, Fla. 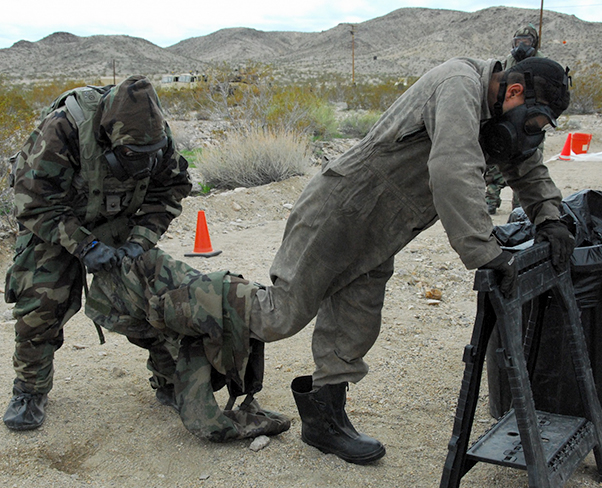 One Soldier from the 44th Chemical Company, Fort Bliss, Texas, helps another Soldier remove his uniform at a field decontamination station during the March training rotation at the National Training Center, Fort Irwin, Calif.

Sgt. John Couglin, sample team member from Valrico, Fla., noted, “This is good training. We have to carefully follow multiple steps to assess this site and what it was used for.”

Miller’s chemical Soldiers, from the 9th Chemical Company, suited up in full mission-oriented protective posture (MOPP) gear. The facility tunneled back for about 50 feet and then branched off from a “T” intersection another 50 feet on both sides. The five Soldiers who went in found a variety of equipment in what looked like a biology laboratory with refrigerators, cages for small animals and other items.

Using their headlamps in the unlit tunnels, the Soldiers found fluids in vials, as well as suspicious powders. Spec. Matthew Armstrong, sample team member from San Antonio, Texas, said, “We use a Q-tip to pick it up and put it into the buffer solution.”

The Soldier will place drops from the buffer solution on a hand-held assay device. If there is a reaction, the Soldier does this twice for field confirmation.

At this site, the team confirmed they’d found a chemical agent. Exiting the tunnel complex, the Soldiers were decontaminated to eliminate any cross contamination. Like evidence at a crime scene, the buffer solutions were sealed, catalogued and placed in an ice chest marked “poison.” Preserving the chain of custody, laboratory scientists at the site signed for the chest and took it for testing and confirmation. The scientists are from the Chemical, Biological, Radiological, Nuclear, Explosives (CBRNE) Analysis and Remediation Activity, part of the 20th CBRNE Command.

“This rotation training strengthens a vital teamwork process with the maneuver forces who secure a town or area, intelligence analysts who identify any chem-bio suspect areas, and my teams who investigate these areas to exploit the information and deny an adversary a weapon. This sequence happens numerous times during the training rotation, and the experience is invaluable to my Soldiers,” Kelly noted. 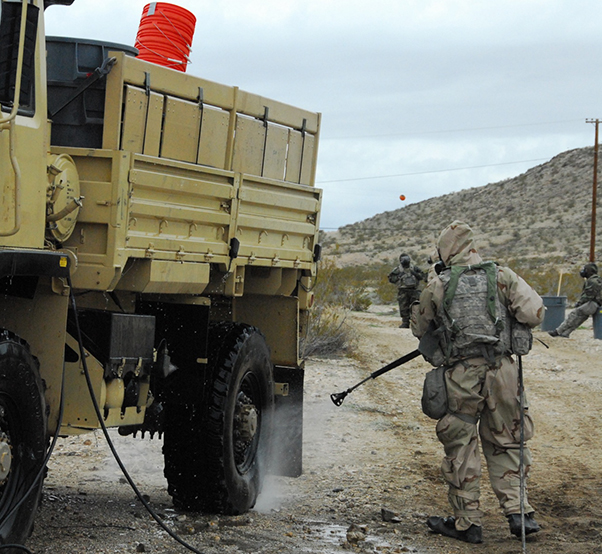 A Soldier with the 44th Chemical Company, Fort Bliss, Texas, sprays a truck to simulate field decontamination during the March training rotation through the National Training Center at Fort Irwin, Calif.