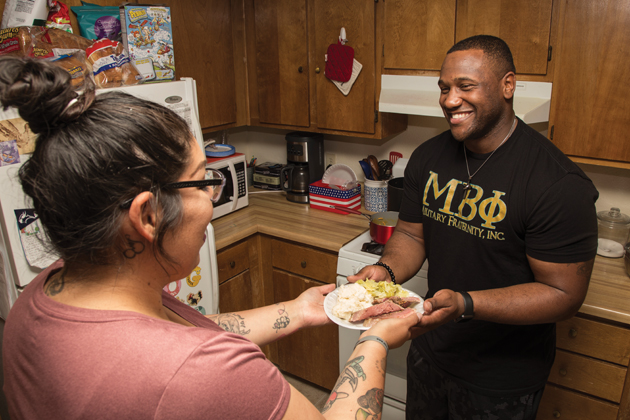 Fort Irwin families reach out to forgotten population on post

FORT IRWIN, Calif. — Victoria Molina spends hours each day in the kitchen cooking up meals, but it’s not for her own husband or family.  Molina is making meals for a population on post that is often forgotten. This forgotten group is our single soldiers and geographical bachelors. Molina cooks as a part of the “Fort Irwin Single Soldiers Meal Donations” Facebook group.

“My husband has been away from home much of his military career, and I know he would have loved a home cooked meal,” Molina said, adding that her passion for feeding soldiers is tied to her knowledge of how hard it is to be away from home with no family or means to cook for yourself.

The Fort Irwin Single Soldiers Meal Donation, is an initiative to feed single soldiers home-cooked meals. The goal is to develop a sustainable, ongoing program that supports feeding soldiers. When a family has extra food to share, they can post photos of the food on the designated Facebook page and offer the food to a hungry soldier.

“A home-cooked meal says ‘love,’” Sgt. Chris Gooding, a frequent meal, recipient said. “It’s nice to be thought of and cared enough about to have that love shared. It gives the soldiers the warmth they are missing from home,” he said.

Since the initiative’s conception in 2016, the Facebook group has grown to a community of 317 members, most of whom are the soldiers receiving meals. Group administrator, Victoria Molina, said the volunteer families involved feed at least 100 single soldiers on a regular basis. Molina would like to see the program grow, but has limited resources for advertising since it’s not an official, MWR-certified business.

Single soldiers who reside in the barracks have no means of a kitchen, Molina shared. These soldiers have a very limited resources when it comes to options for dinner, especially if their duty extends beyond dinning facility hours of operation, she added.

Gooding agreed, saying he constantly encourages single soldiers to sign up on the page and to take advantage of the love and support the community is providing.

“Fort Irwin is a nice community, it’s very welcoming here,” Gooding said. “The people are there for you and you can feel that.”

Gooding has served as the youth advisor for the post Chapel and enjoys giving back to his community. “You get what you put in,” Gooding said. “Giving back to the community, the appreciation means a lot”. Gooding said Fort Irwin has an amazing, tight-knit community and he’s proud to be a part of it.

You feel the out pouring of love with food Gooding said. “Victoria has even brought me food when I was on 24-hour duty,” Gooding said. “She has a big heart”.

Molina said her biggest obstacle with this initiative, other than exposure, is to-go containers. She is happy to lend them out to the soldiers she knows are going to return them but that’s not always the case she said.  Many families will post “bring your own container,” and sometimes that may hinder a soldier from inquiring about the food.

Upon Gooding’s departure, Molina gave him a full plate of festive, St. Patrick’s Day-themed fare containing, corned beef, cabbage, and mashed potatoes. Molina laughed, saying her husband is of American Irish decent and had been asking for her to make corned beef and cabbage for Saint Patrick’s Day and she hopes Gooding enjoys the food. Molina added that she always askes the soldiers how they liked her food, especially when she tries a new recipe she gets excited to share with others.

Molina hopes that even after her family leaves, there will be other families that will continue this support. “I hope that bringing awareness to these soldiers needs will encourage families to share their hospitality, and love, through food.” Molina said.