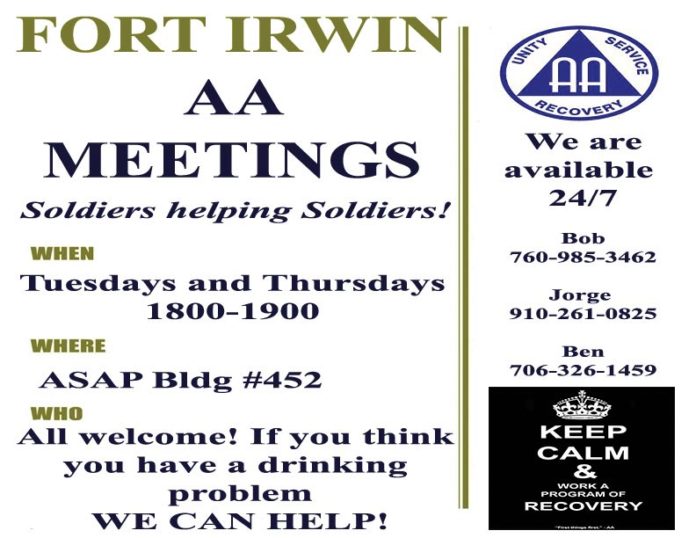 FORT IRWIN, Calif.  — Fort Irwin has been offering weekly Alcoholics Anonymous meetings on post for several years and recently offered another layer called “Al-Anon.” On April 9, an Al-Anon meeting was offered in the ASAP Bldg. 452 for those who are affected by and/or worried about someone with a drinking problem. Al-Anon family members attend meetings to understand drinking problems as a family illness and learn how to play a positive role in the situation.

The program’s leader is a soldier who goes by Jorge. He has been sober for three years and said the “Al-Anon” and “Alcoholics Anonymous” meetings are meant to develop a lifetime change, not only temporary benefits, to follow soldiers and families no matter where they live.

“If you find that inner peace within yourself, no matter where you are, you’re going to be fine,” he said.

Separate from the Al-Anon meetings are the AA meetings (also known as Soldiers for Sobriety), which are each Tuesday and Thursday from 6p.m.-7p.m. at the ASAP Bldg. 452. Although those meetings began before Jorge began as the leader, this month marks three years since he began going and he said he’s seen the number of people attending increase over the years.

“We’re just trying to advertise it more because it seems more people need help,” he said.

Although the meetings are held in the ASAP building, the AA meetings are not a part of the Army Substance Abuse Program— it’s run by the community members to help those in need of support and everyone is welcome to attend.

Jorge said a lot of soldiers who attend their meetings are PCSing (permanent change of station) out of Fort Irwin, so Jorge wants to build a relationship and connection to let those suffering know they can always reach back out to volunteers at the National Training Center, 24 hours a day and seven days a week.

“We usually get soldiers already on their way out but we help them build that foundation,” Jorge said.

The AA volunteers create a space of sobriety outside their meetings by having gatherings at their homes, where they say most alcoholic drinking usually happens. They want to replicate a social life without alcohol that is still enjoyable.

Jorge said some of the group’s speakers are those who come from Las Vegas and Barstow, Calif. to share their story once they’ve been sober for at least one year. Jorge said right now the Al-Anon portion is not regularly scheduled on post until they can gather more participation but members also have support in Hesperia, Apple Valley and Victorville.

He said an advantage of Fort Irwin’s AA services is that they’re available 24/7 and they are completely anonymous.

“If you feel like you want to drink at 11 o’clock on a Friday night, you can call us,” he said.

Rolling in, rolling out day with Blackhorse Troopers

Training for a new type of war